Saturday, April 30, 2016.  Chaos and violence continue, the Green Zone is breached, Nouri al-Maliki gets a little stronger politically, and much more.


Moqtada al-Sadr's protesters live chiefly in Basra (they didn't come into Baghdad today) and in the Sadr section (usually called "slum") of Baghdad.  That last group has been protesting in Baghdad, outside the Green Zone, on his orders.

They made it into the Green Zone.


Everything you need to know?

After the protesters were inside the Green Zone and had stormed the Parliament.


After they had stormed the Green Zone and made it into the Parliament.


In all the years of the Green Zone, it was only almost stormed once and that was shortly after Nouri al-Maliki became prime minister in 2006.

Immediately after, the 'Bremer walls' went up.


Moqtada al-Sadr's protesters made it into the Green Zone today.


Not because they're particularly smart.

Certainly not because they have super powers.

Clearly because either orders weren't followed regarding what to do when people attempt to breach the Green Zone or because there was a stand down order allowing them to seize the Green Zone.

It honestly doesn't matter at this point -- not for Haider al-Abadi.


Nouri al-Maliki was prime minister from 2006 through 2014 and the Green Zone was never breached.

Haider al-Abadi hasn't even been prime minister for two years and it's already been breached.


In August of 2014, the White House forced thug Nouri out as prime minister.

He's refused, even now, to vacate the official home of the prime minister.

He's plotted and schemed to return to power.

And how he's got the best tool and it was handed to him by Haider.

Thug Nouri used those concepts/beliefs when he created his own political slate State of Law.  It's what State of Law candidates ran on -- that they would provide security.

The footage today of the Green Zone?

The best campaign commercial Nouri al-Maliki could ever hope for.

The initial breach was mostly peaceful, but around sunset security forces fired teargas and bullets into the air in an effort to stop more protesters from entering. Around a dozen people were wounded, police sources said.
A United Nations spokesman and Western diplomats said their compounds inside the Green Zone were locked down. A U.S. embassy spokesman denied reports of evacuation.
Iraqi security personnel and Sadr's militiamen formed a joint force to control crowds of protesters, most of whom had left parliament, a source in Sadr's office told Reuters.

All entrances of Baghdad were temporarily shut "as a precautionary measure to maintain the capital's security," another security official said.

Former Iraqi Prime Minister, Nouri al-Maliki, called the storming of the parliament dangerous and called for all Iraqis to stand against it.
Maliki also criticized Abadi for trying to announce a new cabinet during protests which make it difficult for all lawmakers to attend the vote. “That is not reform when there are threats and representatives of the people cannot go to the parliament to express their ideas.”

Unlike me, Kevin Drum's never surprised -- because he knows everything.

Or thinks he does.


The Iraq War cheerleader -- the whore that MOTHER JONES disgraced themselves by hiring -- wants to insist that Moqtada's zombie today were demanding "more technocrats."  He says "Iraq is in chaos.  Again."

When wasn't in chaos?

Oh, when you weren't paying attention?

If it doesn't effect your world of whoring Hillary, it doesn't happen, right?


Yesterday it rained in Tennessee

No one's been resisting any change for technocrats.

And if the dumb ass with blood on his hands read Arabic, he'd be fully aware of how Haider's 'technocrats' have been mocked repeatedly because they aren't.

Not the first slate he proposed as March came to an end and not the current slate.


Calling them that doesn't make it so.


State of Law supporters are on social media as well.

Most outrageous one?  Moqtada spent all that time in Iran in the last decade because he has a boyfriend he keeps there.


This is really a battle between Nouri and Moqtada.

It always has been -- even before Haider showed up as prime minister.

Moqtada's been held check many times by Nouri because Nouri's held on to the arrest warrant for Moqtada all this time.

It's why Moqtada spent so much time out of Iraq.

It's probably why, even now, he gave his speech today -- inciting the followers -- from Najaf and not from Baghdad.  [Mohammed Tawfeeq, Alanne Orjoux and Hamdi Alkhshali (CNN) note, "They hailed Shiite cleric Muqtada al-Sadr, who sparked the protests with a fiery speech on Saturday in the city of Najaf, about 100 miles south of the capital."]


And the forces are part of the problem.


Moqtada's zombies weren't allowed in the federal forces under Nouri.


Haider's let them in and the end result is Baghdad's Green Zone (the only protected area in Iraq) can no longer be secured.

The US Embassy in Baghdad today Tweeted:

Those Tweets weren't for American audiences -- they were in Arabic.

The first one says that no Iraqi government officials are seeking sanctuary in the US Embassy in Baghdad.


The second one insists that US Embassy staff has not been evacuated.

The chaos in the Iraqi capital comes hours after a visit by Vice President Biden that was intended to help calm the political unrest and keep the battle against the Islamic State on track.

As Biden’s plane was approaching Baghdad on Thursday, a senior administration official described the vice president’s visit — which was shrouded in secrecy prior to his arrival — as a “symbol of how much faith we have in Prime Minister Abadi.”
After 10 hours on the ground in Baghdad and Irbil, Biden was hurtling towards his next stop in Rome. The feeling among the vice president and his advisers was that Iraqi politics were on a trajectory to greater calm and that the battle against the Islamic State would continue to accelerate. Some hopeful advisers on Biden’s plane even suggested that Abadi might emerge from the political crisis stronger for having survived it.

No one is talking that way now.

VP Biden Live ‏@VPLive 21h21 hours ago
Wheels down in Baghdad. Here, the @VP walks to his helo with Ambassador Jones and Lieutenant General MacFarland. 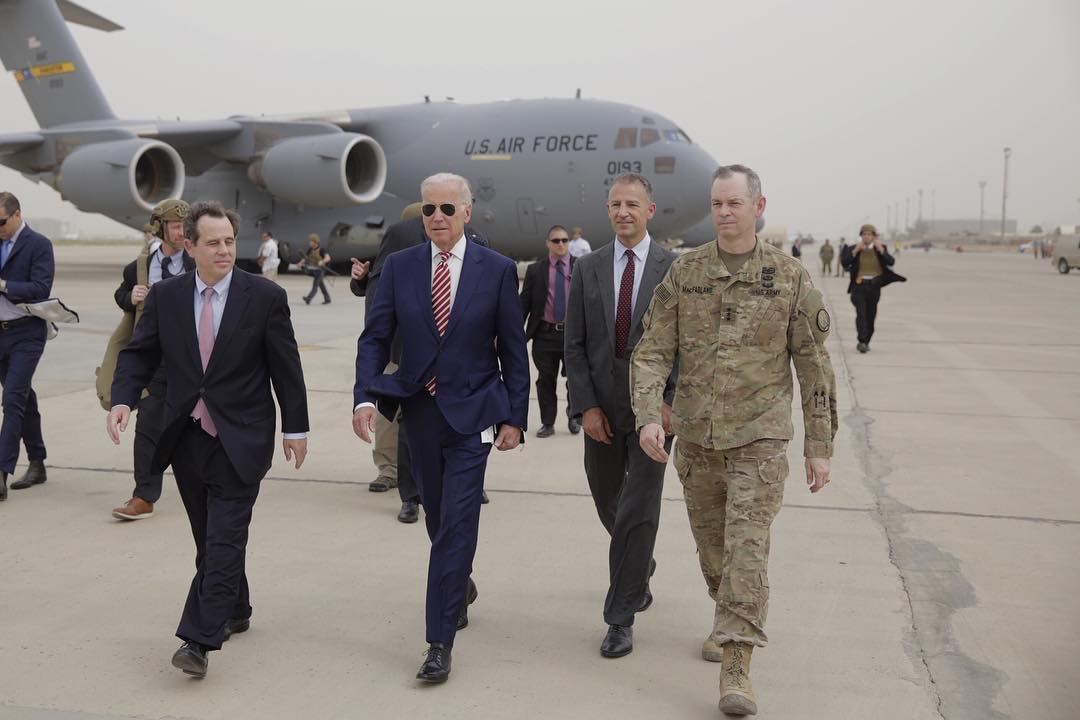 
Strikes in Iraq
Bomber, ground-attack, fighter and remotely piloted aircraft conducted 17 strikes in Iraq, coordinated with and in support of Iraq’s government:

-- Near Al Qaim, a strike struck an ISIL vehicle-bomb facility.

-- Near Habbaniyah, a strike struck an ISIL tactical unit and destroyed an ISIL fighting position and an ISIL mortar system.

-- Near Hit, a strike destroyed an ISIL mortar system.


As Jill Stein, who is seeking the Green Party's presidential nomination, noted: