On May 1, 2003, then President George W. Bush delivered a televised speech on the USS Abraham Lincoln just two months into the bloody invasion of Iraq. Under a banner that read “Mission Accomplished,” Bush proclaimed that “major combat operations in Iraq have ended.” His proclamation was followed by an imperialist occupation that resulted in the deaths of one million Iraqis and nearly 4,500 American soldiers.

US President Joe Biden’s prime time speech Thursday evening, on the occasion of the one-year anniversary of the coronavirus pandemic, had a similar character. Striking the pose of kindly old grandfather, Biden presented the pandemic as if it were now under control with the Democratic Party at the helm. He reassured Americans that they are on track to defeat COVID-19, encouraging Americans to “mark our independence from this virus” by gathering with their friends, families and neighbors on July 4.

Biden made these remarks as scientists in the US and around the world are raising the alarm about the need to take action to halt a deadly new wave of the pandemic, as more infections and deadly variants spread and limited global vaccination efforts threaten a “hurricane” surge. However, governments all over the world, including the Biden administration, are removing whatever restrictions are still in place to stop the spread of the virus.

“Look,” Biden declared, “we know what we need to do to beat this virus: Tell the truth.” However, his entire remarks were based on a series of misleading, distorted and outright lying claims.

“We will never hesitate to use force when American lives and vital interests are at stake, but we will do so only when the objectives are clear and achievable, consistent with our values and laws, and with the American people’s informed consent – together with diplomacy.”

Like pretty much everything ever said by Blinken, and indeed by every US secretary of state, this is an absolute lie.

Firstly, US military force is never used to protect “American lives” in modern times, unless you count the lives of US troops and mercenaries in foreign lands they have no business occupying in the first place. The US military is never used to defend American lives against an invading enemy force; that simply does not happen in our current world order. It is only ever used to protect the agenda of unipolar planetary domination, which would be the “vital interests” which Blinken obliquely refers to above.

Secondly, Blinken’s claim that the Biden administration will never use military force without “the American people’s informed consent” has already been blatantly invalidated by Biden’s airstrikes on Syria last month. The American people never gave their consent to those airstrikes, informed or uninformed. A nation the US invaded (Syria) was bombed because troops are being attacked in a second nation the US invaded (Iraq) on the completely unproven claim that a third country against whom the US is currently waging economic warfare (Iran) supported those attacks. At no time were the people asked for their consent to this, and at no time was any attempt made to ensure that they were informed of the situation before it happened.

Thirdly, US military force is never, ever conducted with the American people’s informed consent. Literally never. Consent is always manufactured for US wars by lies and mass media propaganda, one hundred percent of the time, without exception. The bigger the military operation, the more egregious the deceit used to manufacture consent for it. Even in relatively “peaceful” times when the US is merely raining dozens of bombs and missiles per day on foreign soil, Americans are subject to a nonstop deluge of distorted and outright false narratives about their military and the nations it targets for destruction.

Turning to the country Joe Biden destroyed, Iraq, the Turkish government continues to bomb Iraq despite objections from the Iraqi government and, more recently, the government of Iran.  Two weeks ago, when the Iranian government called out Turkey's illegal bombings of Iraq, the Turkish government summoned Iranian Ambassador Mohammad Farazmand to express their dislike/distaste for the remarks.  The US government has repeatedly refused -- under various presidents -- to offer a single word of support to the Iraqi government when they call out Turkey's continued attacks on Iraq.   Abudllah Bozkurt (NORDIC MONITOR) reports:

Violations of Iraq’s airspace and territory by the Turkish military have tripled on a daily average since 2017, records submitted to the United Nations Security Council (UNSC) by Baghdad have shown.

The repeated violations in terms of incursions into Iraqi territory by Turkish troops, the maintenance of bases, cross-border bombardments and Turkish warplanes’ entry into Iraqi airspace prompted Baghdad to file a complaint with the UNSC.

The records show that it has become almost a daily occurrence for Iraq’s Foreign Ministry to issue notices to the Turkish Embassy in Baghdad and call on Turkey to respect the independence and sovereignty of Iraq.

“The bombardment of Iraqi territory by the Republic of Turkey and the presence of that country’s military forces inside Iraqi territory on the pretext of protecting its national security are violations of the sovereignty of Iraq, the principles of good neighbourliness and the principles of the Charter of the United Nations and international law,” said Bahr Aluloom, Iraqi ambassador to the UN, in a letter to the UNSC on June 16, 2019.

Pope Francis just completed his four-day apostolic journey to the Republic of Iraq. This marked moments of great significance in the religious history of our modern era on a number of fronts, but most important was the fulfillment of the papal desire to visit this country.

Pope Francis’ insistence to visit Iraq is also to be viewed through the lenses of papal continuity. Twenty-two years ago, Pope John Paul II expressed his desire to visit the biblical city of Ur to mark the beginning of the Great Jubilee in 2000, but the trip was declined by President Saddam Hussein.

Pope Benedict XVI also expressed utmost concern about the religious persecution of Christians in Iraq by ISIS. He also held a Synod of Bishops for the Middle East in October 2010 to discuss the situation. It is in this papal spirit that Pope Francis insisted on the trip in spite of the health, and security risks it bore.

Vince Mallett (THE OBSERVER) reports, "Throughout his visit, he gave a series of remarks that repeatedly emphasized one theme: peaceful fraternity between different religious groups. The Pope pulled no punches and made no equivocations about the absolute need for peace in the search for justice, remarking in his first statement of the trip, 'Religion, by its very nature, must be at the service of peace and fraternity.' Religious division must never be a source of human conflict, Pope Francis argued, because religion in itself is a communal movement towards God."  CATHOLIC NEWS SERVICE quotes Pope Francis stating, of Iraq, "despite the roar of destruction and weapons, the palm, a symbol of the country and of its hope, has continued to grow and bear fruit."  NATIONAL GEOGRAPHIC offers Moises Saman photo essay on the Pope's trip.

Iraqi authorities have announced that the Islamic State was behind a brutal massacre in a village south of the central Iraqi city of Tikrit on Friday morning, killing six members of one family.

In addition to the family members, which included a mother and daughter, a policeman and a lawyer were also reportedly left dead.

In the hours following the incident, the Islamic State claimed responsibility for the attack, in which gunmen in military uniforms stormed several houses in al-Boudur, located in Salahuddin province.

Those who carried out the attack "infiltrated the village on foot, wearing military uniforms under the pretext of searching the houses of the murdered on the outskirts of the village, where they carried out their treacherous crime," read a statement released later that day by Iraq's Joint Operations Command.

Up until 2013, these were largely led by the Sunni Arab minority that felt marginalised by the post-2003 order.

Their demonstrations came to a violent end in 2013 when former Prime Minister Nouri al-Maliki ordered the army to forcibly disperse protest camp sites in Ramadi and other cities, a move an Iraqi parliamentary probe later blamed for the rise of the armed group ISIL (ISIS) in Mosul.

Since ISIL’s defeat in 2017, tensions between state and society simmered until exploding in October 2019, this time in Iraq’s Shia heartlands – traditionally the bastion of electoral support for the Shia-dominated political system.

Complaining of corruption, a lack of economic security, and accusing Iraq’s political elites of being beholden to foreign powers, particularly Iran, mostly Shia Arabs took to the streets of the capital Baghdad, Basra, Nasiriya, and other main population centres throughout central and southern Iraq.

The federal authorities’ response was to once more resort to violence, backed extensively by Shia militias which deployed snipers on rooftops to pick off demonstrators.

“There are so many examples of the state’s alliance with the militias,” Sara, who attended the protests in Baghdad, told Al Jazeera, asking that her real name not be used for her own security.

“Their alliance was to protect a system that works for Iran and its clients in Iraq, not the Iraqi people who suffer under their corrupt rule,” she said. “They have a long history of violence against the Iraqi people.”

ALMADA reports that protesters in Najaf, on Friday, began calling for Governor Luay al-Yassiry to be dismissed.  Protester Ali al-Dabhawi tells the newspaper that the approximatly 3,000 protesters shut down six streets in their protests.  The protests continued on Saturday and ALSUMARIA offers a photo essay.  BASRA TODAY Tweets: 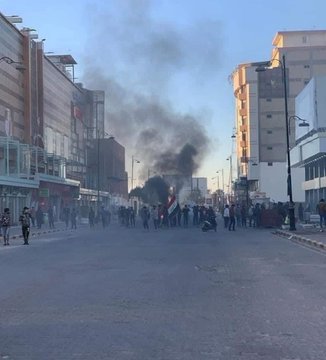 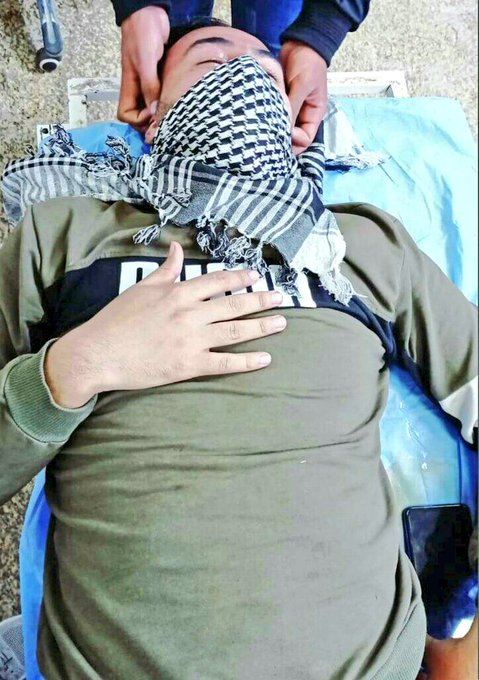 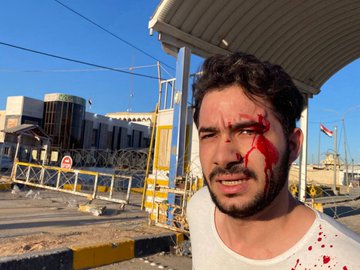 The security forces are once again suppressing the Najaf protests with excessive force . -According to Al Hakim Hospital: 11 seriously injured and 25 suffocated from tear gas canisters. 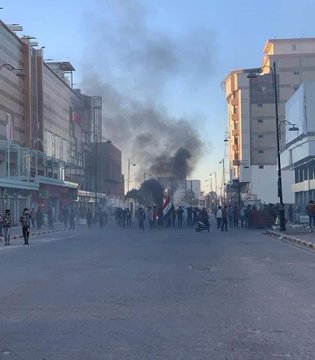 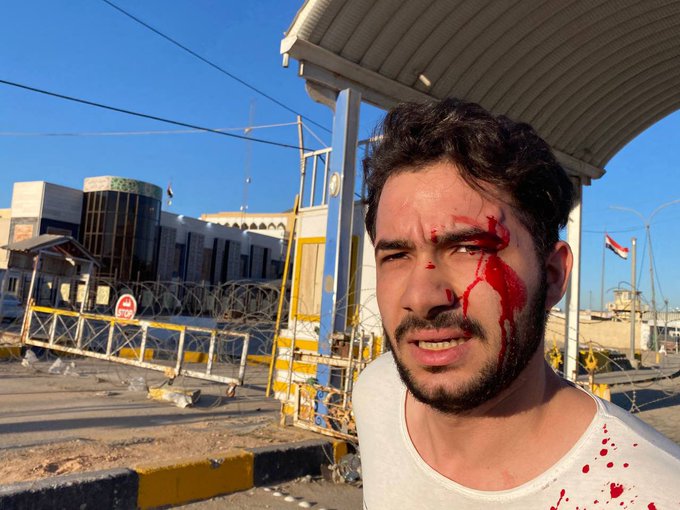 As journalist Rasha al-Ageedi notes, this violence (security forces shooting at protesters) takes place one week after Pope Francis' visit to the city.  Protests also continue in Nasiriyah where the protesters today, ALSUMARIA reports.  They are demanding a new governor from a list of proposed candidates.

Blondie - In The Flesh

Official video of Blondie performing In The Flesh from the album Blondie.