The Iraqi government on Saturday allowed a trickle of civilians back into the western city of Fallujah, where they will begin the daunting task of rebuilding their lives in a city ragged from conflict and lacking even the most basic services.


Three months after the city was recaptured from Islamic State militants, a convoy of seven families returned in the early hours of the afternoon after being checked against databases. Returnees were vastly outnumbered by local officials, journalists and security forces.


And now leaflets are dropped over Mosul warning of the impending battle.  POLITICO's called it Barack's "October surprise."

And what's been done to protect the civilians.

The internal refugees in Iraq are not an unknown.

Three months after Falluja is 'liberated' and the people still aren't allowed back.

Now Mosul's about to be 'liberated.'


Despite that fearful prospect, what concerned me most was is what Yassin said about what could happen after the liberation of Mosul. This is going to be a “coalition” offensive—but the coalition isn’t one of different countries. Everyone involved is Iraqi, but they consist of the fractious, mutually mistrustful constituents—Kurdish Peshmerga, Shia militias, the mixed-sectarian bag that is the Iraqi army—of a country that could still easily fall into civil war again after ISIS is defeated. Yassin said one of his major concerns is that binding political agreements won’t be in place prior to the fighting, and if there aren’t clearly articulated limits and responsibilities for each of the attacking forces, it’s not hard to imagine Sunni militias butting heads with Shia militias during the fighting, potentially coming to blows with each other.
The result could be an Aleppo-style quagmire.
And there is little in place right now to prevent that. Thanks to the continuing weakness and corruption of the Iraqi government, there is presently no central command authority for the operation to recapture Mosul. Thus, while optimistic press releases coming from U.S. military and government sources give the impression that the looming battle of Mosul “is the end game in Iraq,” the truth is far different. Rather than marking the end of the war in Iraq, the fall of Mosul— if it even happens—is likely to mark the beginning of the next nasty conflict. 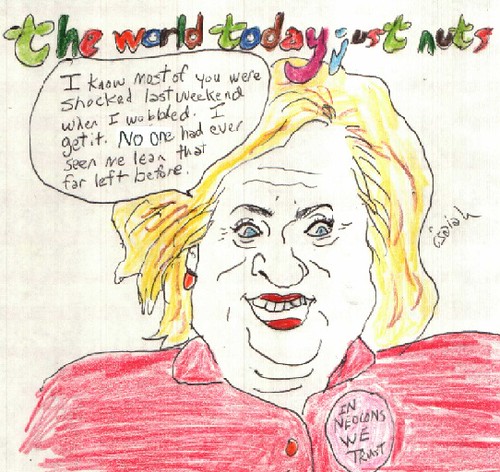 Isaiah's latest THE WORLD TODAY JUST NUTS "Hillary Explains."  Wearing a button which reads "IN NEOCONS WE TRUST," Hillary Clinton explains last weekend's stumble, "I know most of you were shocked last weekend when I wobbled.  I get it.  No one had ever seen me lean that far left before."   Isaiah archives his comics at The World Today Just Nuts.