SHE MADE ME LAUGH must-read book 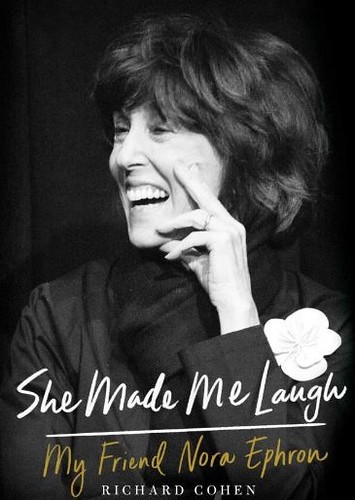 I know, I said in Friday's gina & krista round-robin that the review Ava and I did of THE WIKILEAKS FILES: THE WORLD ACCORDING TO US EMPIRE as the last book review I'd do for the year and in a way it's true.


I don't have time for another book review.

But on today's plane ride home, I finally had time to read Richard Cohen's SHE MADE ME LAUGH: MY FRIEND NORAH EPHRON.

Again, no interest in another book review but this is too good of a book not to note.

I think Nora would enjoy it as well.

I was worried what type of book it would be, it's a truthful book.

That doesn't mean I agree with every conclusion Richard draws of an incident.  There's at least one, for example, that I would see it differently (and I was present for it).  But I think it's his truth and Nora would respect that.

She was many things -- including an intern at the White House (when JFK was president).

She started her professional career as a journalist.

She found acclaim very easily because of her immense writing talent.

From there, she made her mark as a media critic laying the groundwork for all the dabblers that follow today -- whether they are aware of her work or not.

On both paths, she was a leader in the New Journalism wave -- Gail Sheehy and Joan Didion would be two other women belonging to that genre.


She then would move on to screenplays.

She rote the script for the hit film WHEN HARRY MET SALLY . . . and continued to work with the star Meg Ryan in other films such as HANGING UP -- she co-wrote the script with her sister Delia Ephron and co-produced the film as well (Diane Keaton directed the film).

Two other films with Meg Ryan were huge hits.

1993's SLEEPLESS IN SEATTLE starred Meg with Tom Hanks,  Nora co-wrote the screenplay and she directed the film.  She and her sister Delia co-wrote 1998's YOU'VE GOT MAIL which was directed by Nora and again starred Meg and Tom.

Her last film was 2009's JULIA & JULIA, she wrote the screenplay and she directed the film which starred Meryl Streep.


Those three films were not just critical hits, they also brought in $608,100,000 in ticket sales alone.

If you add in the other films she directed -- THIS IS MY LIFE, MIXED NUTS, MICHAEL, LUCKY NUMBERS and BEWITCHED -- her films sold over 753 million dollars worth of tickets.  That's not counting income from home media.


For a director in a medium that resisted women, those are especially huge accomplishments.


(The women who acted in her films alone are a huge accomplishment -- look at your male established directors and see how many women they've worked with.)


She directed eight films and five of them each passed the one hundred million gross in ticket sales.

Penny Marshall was the first female director to break into the over one hundred million gross with her film BIG (1988) and would do it again with 1992's A LEAGUE OF THEIR OWN.

Amy Heckerling followed with 1989's LOOK WHO'S TALKING, Barbra Streisand with 1991's THE PRINCE OF TIDES and  Penelope Spheeris with 1992's WAYNE'S WORLD all became women who directed films that grossed over 100 million in ticket sales.

Penny, Amy, Barbra, Penelope and Nora never received Academy Award nominations for their directing (and don't say it's due to their directing comedies, Penny also directed the highlight acclaimed AWAKENINGS and, of course, Barbra's PRINCE OF TIDES was a romantic drama).


Kathryn Bigelow is the first woman to win the Academy Award for Best Director (THE HURT LOCKER) and her ZERO DARK THIRTY crossed the $100 million mark in ticket sales as well.  She is part of that peer group because her fist film (as solo director) was 1987's NEAR DARK.

I'm leaving out Gillian Armstrong, Joan Milkin Silver and Martha Coolidge intentionally due to their first films being in the 70s.  Also that list in the previous paragraph is highlights, not a full listing.


I'm also not sure where to put Nancy Meyers who's directed WHAT WOMEN WANT, SOMETHING'S GOTTA GIVE, THE HOLIDAY, IT'S COMPLICATED and THE INTERN -- all five of which each sold over 100 million in tickets at the box office.

Anyone with half a brain knows that Nancy directed IRRECONCILABLE DIFFERENCES (1984), BABY BOOM (1987) and FATHER OF THE BRIDE (1991)  just as much as Charles Shyer did.  The two were married at the time and she took production credit because he insisted upon directing credit.  While Nancy's career has flourished since the divorce -- and she's become the most commercially successful female director -- Charles Shyer has sought (or ended up with) a much lower profile.


All of the above is to note how huge Nora Ephron's accomplishments were and are.

Were she a man, there would be a dozen biographies on the shelves about her.


This is an important book just because of its subject.

But Nora had a varied life with second and third and fourth and fifth acts and Richard captures that so well.

It's also an important book because Richard Cohen knew Nora so this will be used in future works as a secondary source repeatedly.

It's also an important book because it's so well written.

Richard Cohen is a columnist for THE WASHINGTON POST and has been for decades.  He is a strong writer and that comes across in the pages.  (It did in his  THE SEDUCTION OF JOE TYNAN but that's been all but forgotten after Alan Alda's clumsy script butchered the larger and subtle points of Cohen's novel).

I strongly recommend this book.

[As disclosed before, I know Richard Cohen and I knew Nora Ephron.  Most of the time, I disclose that so it doesn't appear I'm playing favorites.  But if you read Ava and my 2012 "TV: A week of hating women" or our "Celebrating The Least of Nora Ephron (Ava and C.I)" should make clear, name checking Nora or not honoring her work results in intense criticism from me regardless of who the author is.  Yes, I know Richard but if his book didn't capture Nora and her accomplishments, I'd be savaging it.  Instead, I'm doing something I swore I wouldn't do again in 2016, plugging another book -- it's that good.]