Tuesday, November 15, 2016.  Chaos and violence continue, the refugee situation grows worse, if Hillary supporters are so bothered by sexism why aren't they calling for a woman to be named Senate Minority Leader, and much more.


Yesterday afternoon, US President Barack Obama held a press conference (transcript and video at the link -- video also below).

Rebecca shared her thoughts on it in "i offer some praise of barack."

As she observed, Barack did not come off scripted and was all the more effective as a result.

He seemed to be reflecting as he answered. 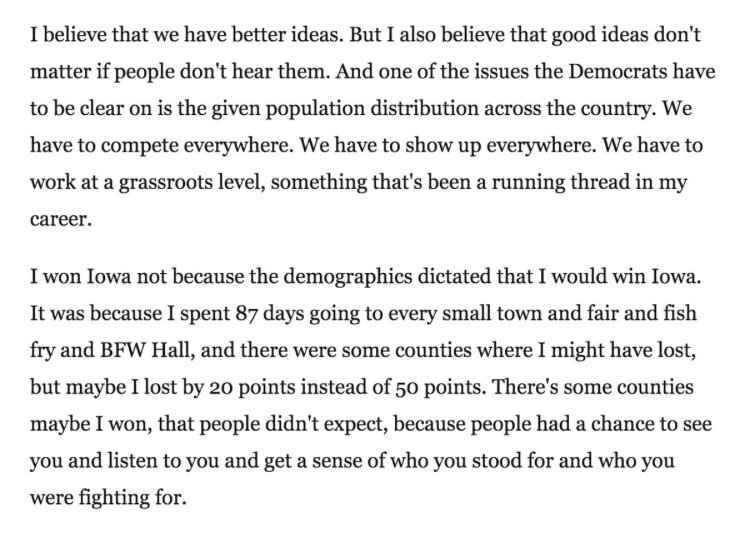 
Maybe Hillary should have gone to Wisconsin while campaigning in the general election?


Not only did she not step foot in it, she also really didn't advertise in it.


Zooming in on the same remarks Michael Tracy did, Sophie Radvan (HOLLYWOOD LIFE) shares, "Barack's messages towards Donald lately have been so positive as he urges Americans to give him one chance at presidency, but when it comes to Hillary, he sounds a little disappointed in her."


No one appears to notice, but Barack also got in a rebuke to Hillary and her 2008 ad about being ready when the call comes at 3:00 a.m.

The US Congress will be changing shape -- or at least formation -- as well.  In the House, there is a move to dispose Nancy Pelosi.

Pelosi came to power as House Minority Leader in 2003 by, among other things, using photos of an event one of her rivals held in ____ , __ in 1992 -- yes, her people dug that far back -- which showed volunteers who'd spent the day block walking for the Clinton-Gore ticket drinking booze -- some of the drinkers were under 18.

People questioned how Pelosi could remain as leader of the Democrats in the House after the appalling 2010 election -- when they lost control of the House?

Because Pelosi's camp knows how to find the ugly.  Negative is how they roll.

But there's a serious push back against Nancy currently.

Those quick to paint it as a good v. bad battle should rethink.

Nancy's stubborn and pig headed but she's no worse on larger issues than those vying to take her place.

Republicans also held onto control in the Senate.


Corruption, sex scandals and a nasty trick with a mean punch led to Senate Minority Leader Harry Reid retiring.   Chuck Schumer out of New York is one person vying for the position.

The InterceptVerified account ‏@theintercept  15h15 hours ago
Schumer, the likely Senate minority leader, voted for the Iraq War and the Patriot Act, and has defended torture.
72 replies898 retweets756 likes

A leadership position is open.

I thought Democrats were whining that Hillary was the victim of sexism.

I'd argue Democrats are sexists.  (I identify as a feminist and as a member of the left.  With the Dems supporting one war after another, they've lost me.)

Patty Murray is the most qualified member of the Senate for leadership.

Why isn't she being named?

Hey Debra Messing and you other loons, why the hell aren't you championing Patty Murray.

But everyone rushes to name a man to the post?

While whining that sexism cost Hillary the presidency?

Sexism cost Hillary the nomination in 2008.

But if you think it did, all the more reason to insist that a woman become Senate Majority Leader.

There's never been a woman in that position.  Nancy Pelosi is the only woman that's ever been House Majority Leader or House Minority Leader in the House of Representatives.

If you think Hillary suffered because America's not ready for a female president, then it's your job to help make the country ready by showing women in Congressional leadership.


Either start insisting on a woman for the post or stop claiming sexism cost Hillary the presidency.


Finally, on a personal note, Michelle and I want to offer our deepest condolences to Gwen Ifill’s family and to all of you, her colleagues, on her passing.  Gwen was a friend of ours.  She was an extraordinary journalist.  She always kept faith with the fundamental responsibilities of her profession -- asking tough questions, holding people in power accountable, and defending a strong and free press that makes our democracy work.
I always appreciated Gwen’s reporting, even when I was at the receiving end of one of her tough and thorough interviews.  Whether she reported from a convention floor or from the field, whether she sat at the debate moderator’s table or at the anchor desk, she not only informed today’s citizens, but she also inspired tomorrow’s journalists.  She was an especially powerful role model for young women and girls who admired her integrity, her tenacity, and her intellect -- and for whom she blazed a trail as one-half of the first all-female anchor team on network news.
So Gwen did her country a great service.  Michelle and I join her family and her colleagues, and everybody else who loved her in remembering her fondly today.

I won't pretend she's anything worth praising and call into question the intellectual capacity of people claiming she is.

Dropping back to the October 8, 2007 snapshot -- and we're starting a bit ahead to remind everyone of the incident with Blackwater killing Iraqi civilians:

Paul von Zielbauer (New York Times) reports that the Iraqi government has finalized their investigation and "found that employees of the American security company Blackwater USA shot unprovoked at Iraqi civilians at a downtown traffic circle three weeks ago, an episode that killed 17 people and wounded more than 20 others, a government spokesman said Sunday"  quoting Ali al-Dabbagh who also declares that Blackwater's vehicles were not "even hit by a stone" before Blackwater initiated the slaughter of Iraqi civilians.  James Glanz and Alissa J. Rubin (New York Times) add, "Those conclusions contradict Blackwater's original statement on the shooting, which said that a convoy operated by the company's guards 'acted lawfully and appropriately in response to a hostile attack.' The Iraqi findings are also at odds with initial assertions by the State Department that the convoy had received small-arms fire."  Which again goes the issue that the US State Dept has repeatedly provided cover and falsehoods in order to protect Blackwater.  AP reports, "Iraqi authorities want the U.S. government to sever all contracts in Iraq with Blackwater USA within six months and pay $8 million in compensation to each of the families of 17 people killed when the firm's guards sprayed a traffic circle with heavy maching gun fire last month."
Naomi Klein's new book The Shock Doctrine: The Rise Of Disaster Capitalism and she uses the book and the research for her article "Disaster Capitalism: The new economy of catastrophe" (October's Harper's magazine, pp. 47 -- 58).  this is from the article (page 48):
Everywhere in Iraq, the wildly divergent values assigned to different categories of people are on crude display.   Westerners and their Iraqi colleagues have checkpoints at the entrances to their streets, blast walls in front of their houses, body armor, and private security guards on call at all hours.  They travel the country in menacing armored convoys, with mercenaries pointing guns out the windows as they follow their prime directive to "protect the principal."  With every move they broadcast the same unapologetic message: We are the chosen, our lives are infinitely more precious than yours.  Middle-class Iraqis, meanwhile, cling to the next rung down the ladder: they can afford to buy protection from local militias, they are able to ransom a family member held by kidnappers, they may ultimately escape to a life of poverty in Jordan.  But the vast majority of Iraqis have no protection at all.  They walk the streets exposed to any possible ravaging, with nothing between them and the next car bomb but a thin layer of fabric.  In Iraq, the lucky get Kevlar; the rest get prayer beads.
That's pretty clear.  Except to the mainstream.  Over the weekend on PBS' Washington Week (or Washington Weak) Linda Robinson of US News and World Reports decided to chat and chew the topic with star Gwen:
Linda Robinson:  Well Blackwater has about 800 people who are primarily providing bodyguard service to the embassy personnel.  And there are about, well there are some thousands of other contractors doing this exact kind of job.  So they're moving around the city in convoys and they apply very aggressive tactics in general.  There are some who are alleging that Blackwater in particular uses much more aggressive tactics.  But let's just set the stage a little bit.  Very, very violent city.  You're driving around, bombs are going off, at any unpredicted time.  So what happens is these convoy drivers uses a tactic: they throw things at people, they sound their horns their sirens if you don't get out of the way they will shoot.  So Iraqi drivers generally pull over as soon as they see a convoy.  The problem is SUVs cannot readily be identified often from a distance --
Gwen Ifill: Yeah, how do you know it's a convoy?  How do you know it's not the military?  How do you know -- tell the difference?


That's the problem.  Washington Weak tells you that's the problem.  For the record, Robinson informs Gwen that it's very obvious when it's the military and it's only confusing when it comes to civilian contractors.  So the question is, were Linda Robinson or Gwen to be walking to their cars at the start of the day and a car came zooming through with those in it throwing things at them, would they see that as a problem?  Should Jon Stewart attempt to find out for The Daily Show?  In fact, it shouldn't even be a surprise.  Gwen and Robinson should volunteer for it to prove what good sports they are.  After ten to fifteen minutes of drive-bys where water bottles are hurled at them (the mildest object usually cited in press reports) from speeding cars, let's see their smiling, bruised (possibly bloodied?) faces and find out whether they now think that "the problem" includes a great deal more than being able to tell if a convoy is approaching?  What's really appalling is Robinson admits to being selective in her report explaining that's why she "set up" because, apparently, reporters are not supposed to show any sympathy for the civilian populations they are allegedly covering but instead are supposed to be act as a p.r. hack for multi-billion dollar corporations.  And the chat and chew only got worse as it was wondered if this was all just sour grapes due to Blackwater's "success"?


Were I to note the passing of Gwen, I'd do it by throwing water bottles at her coffin as it was carried to the grave.

I still remember Gwen laughing on air during that segment.

Iraqis were dead and Gwen found the whole thing amusing.

I won't mourn her.


We have challenges internationally, but our most immediate challenge with respect to ISIL, we're seeing significant progress in Iraq, and Mosul is now increasingly being retaken by Iraqi security forces supported by us.  Our alliances are in strong shape.

More importantly, there's nothing beyond military.

There's been no effort to plan for post-Mosul.

The culture, the identity, of the city itself is in shreds.

And how will whatever merges get along with the Baghdad-based government which has persecuted Mosul and its leaders for ten years now? 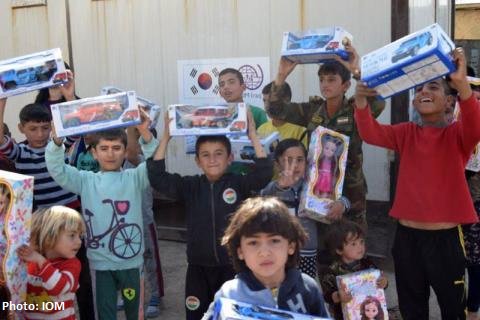 
Let's go back to the US to note veterans.

And this demand is completely expected.  Has the VA kept up with this expectation would be a solid question to ask.

They apparently have still not addressed the issue of wait times.

Jake Tapper ‏@jaketapper  10h10 hours ago
Another Iowa Veteran Suicide After Family Says He Was Told to Wait for Treatment by VA | http://whotv.com
0 replies332 retweets173 likes