A convoy of more than 100 US military trucks have crossed the border into Iraq from Jordan carrying considerable amounts of arms and vehicles to the US Ayn al-Asad base in the western province of Anbar.

Xinhua reports: "A convoy of more than 100 military trucks, carrying equipment, weapons and vehicles arrived at Ayn al-Asad air base, near the town of al-Baghdadi, some 190 km northwest of the Iraqi capital Baghdad, a police officer from Anbar provincial police told Xinhua on condition of anonymity. "These trucks came from Jordan through Trebil border crossing, where the Iraqi forces escorted the U.S. trucks until they reached to Ayn al-Asad air base," the source said."
US officials have for the most part not commented on the convoy. However, it seems they are preparing for something to happen or to do something themselves.

The political and moral culture of the United States allows for bipartisan cooperation to destroy an entire country, killing hundreds of thousands of people in the process, without even the flimsiest of justification. Then, only a few years later, everyone can act as if it never happened.
In 2011, the U.S. withdrew most of its military personnel from Iraq, leaving the country in ruins. Estimates of the number of civilians who died during the war in Iraq range from 151,000 to 655,000. An additional 4,491 American military personnel perished in the war. Because the bombs have stopped falling from the sky and the invasion and occupation of Iraq no longer makes headlines, Americans likely devote no thought to the devastation that occurred in their name.
With the exception of Rep. Tulsi Gabbard of Hawaii, who is currently polling at or below 2 percent, no candidate for the Democratic presidential nomination has consistently addressed the criminality, cruelty and cavalier wastefulness of American foreign policy. Joe Biden, the frontrunner in the race, not only supported the war in Iraq — despite his recent incoherent claims to the contrary — but as chair of the Senate Foreign Relations Committee acted as its most effective and influential salesman in the Democratic Party.
The blasé attitude of America toward the death and destruction it creates, all while boasting of its benevolence, cannot withstand the scrutiny of science. Dr. Mozhgan Savabieasfahani, an environmental toxicologist at the University of Michigan and recipient of the Rachel Carson Prize, has led several investigative expeditions in Iraq to determine how the pollutants and toxic chemicals from the U.S.-led war are poisoning Iraq’s people and environment. The health effects are catastrophic, and will remain so long after the war reached its official end.
I previously interviewed Savabieasfahani about her initial research, and recently acquired an update regarding her team’s latest discovery that there is a close correlation between proximity to a U.S. military base and birth defects in Iraqi children.

In the US, the race is on for the Democratic Party's presidential nomination.  Joe Biden is the only candidate running who supported the Iraq War so, naturally, the corporate press embraces him.  His gaffes continue, his lies continue.  Have we reached the point where we say "enough" yet?  SPUTNIK notes:


Speaking to NPR this week, and asked to comment on his judgement during the pre-Iraq invasion period, Biden confidently said that he would “let [his] record stand,” saying his record was “good,” and that Bush had given him his word that he would not invade Iraq at the time.
The former senator from Delaware, who served as Chairman of the powerful Senate Foreign Relations Committee at the time, and voted in favour of the resolution authorizing the Iraq War in 2002, (falsely) claimed at the time that Iraqi leader Saddam Hussein had access to chemical and biological weapons, and was pursuing nuclear weapons.
[. . .]
Biden, who is leading most polls among prospective voters for the Democratic nomination, has faced a battle with his own tongue since announcing his run for the presidency in April. In the past 30 days, he has got into trouble after mixing up key details of a story involving a veteran of the US war in Afghanistan, asked voters to imagine Obama’s assassination, forgot Obama’s name and referred to him as ‘President…My Boss’, defended ‘poor kids’ for being just as bright as ‘white kids’, and urged a confused audience in Iowa to “choose truth over facts.”
Last month, The Hill reported that Biden’s advisors were looking to cut down his campaign appearances, particularly in the evenings, fearing he might make another gaffe. President Trump, known for gaffes of his own, recently asked whether Biden was “mentally fit to be president”, while misquoting Biden’s statement about choosing “truth over facts.”

Iraq remains a failed state and they currently have an inept prime minister.  The world press spends a great deal of time trying to pretend otherwise.  It's worth noting that this is the prime minister the CIA has always wanted.  For years, they have insisted that Adel Abdul Mahdi was the most suited.  They finally got their way last October and what has the world learned?  That the CIA shouldn't pick leaders and that an intelligence agency needs more than the term "intelligence" in its name to be seen as keen.  Hamza Mustafa (ASHARQ AL-AWSAT ) notes:

His remarks were in reference to the Popular Mobilization Forces’ announcement that it was establishing an air force directorate.

In a series of tweets, Sadr said the move was the beginning of the end of the government and the transformation of Iraq into a lawless state, adding that he was distancing himself from these developments.

Head of the security and defense parliamentary committee and a member of Sadr’s Sairoun parliamentary bloc, Mohammed Rida urged Abdul Mahdi to preserve the authority of the state and its military.

He warned that the PMF’s establishment of an air force undermines and weakens the state, “which is why we must put an end to the chaos of weapons.”

Clare Daly is an Irish politician who has been a Member of the European Parliament from Ireland since July. She is a member of Independents 4 Change, part of the European United Left–Nordic Green Left. She served as a Teachta Dála or member of Ireland’s parliament from 2011 to 2019. Clare Daly will be speaking at the NoWar2019 conference and rally being planned by World BEYOND War for Limerick, Ireland, on October 5th and 6th.
Total run time: 29:00
Host: David Swanson.
Producer: David Swanson.
Music by Duke Ellington.
Download from LetsTryDemocracy, or from Internet Archive.
Pacifica stations can also download from Audioport.
Youtube video is here.
Syndicated by Pacifica Network.
Please encourage your local radio stations to carry this program every week!
Please embed the SoundCloud audio on your own website!
Past Talk Nation Radio shows are all available free and complete at
http://TalkNationRadio.org
and at
https://soundcloud.com/davidcnswanson/tracks

Journalist, activist, artist and author David Bacon's latest book is The Right to Stay Home: How US Policy Drives Mexican Migration (Beacon Press).  This is his "Street Scenes in Manila."

Nonviolence Denial Is As Dangerous As Climate Denial

Nonviolence Denial Is As Dangerous As Climate Denial
By David Swanson
http://davidswanson.org/nonviolence-denial-is-as-dangerous-as-climate-denial/ 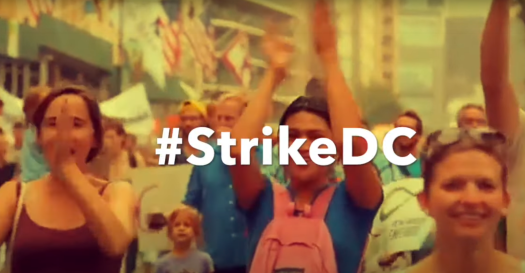