When your sister turns to leave
Only when she's most in need
Take away the cost of pain
By showing her we're all the same
Have no envy, have no fear.

Kat: That's a section of Joshua Radin's "No Envy, No Fear" from his album Simple Times which was released in September 2008. It's one of those albums I discovered this month, one of the ones that pop up as "daily digital download" bargain at Amazon. I don't know your process for determining an album but I look at the price first. $1.99 was the price that day (the special is off) which meant there had to be two songs I liked. So I looked at the titles, saw "Vegetable Car" and figured what the heck. Normally, I would listen to two tracks, the samples of two tracks Amazon provides, and make my decision based on that. But "Vegetable Car" is a track Ava and C.I. have long brought on the road. The first month, I rolled my eyes every time it was played. As Thanksgiving loomed, it had grown on me. So seeing that track listed, I knew the album was worth at least $1.99. 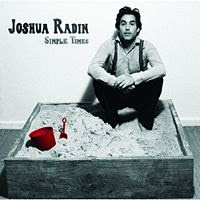 Turned out to be a huge understatement. I think "No Envy, No Fear" is my favorite track. I think that. I'm not 100% sure. "I'd Rather Be With You," for example has some wonderful imagery and words choices. "Friend Like You" probably has the most effective vocal and is a wonderful song. And "Sky" (another song Ava and C.I. brought along on the road) features a wonderful interplay of Joshua's voice with Ingrid Michaelson.

The whole album features his guitar playing and that alone would be reason to download. But this really is a strong album in terms of music, songwriting and singing. It would fit comfortably played between Schuyler Fisk's self-titled debut and Tracy Chapman's Our Bright Future. Simple Times is an album of simplicity and, as with Fisk, I do fear Joshua Radin will show up in two albums or so burying his natural charm under whatever he thinks he might sell. 2005 saw a very talented young guitar playing, singer-songwriter emerge and one of his finest songs paid homage to Brian Wilson. I raved over the album (it deserved it). I bought the follow-up with tremendous anticipation, eager to get the word out on his latest . . . only to find that everything he had worth praising was gone. All the magic had been stripped away and he'd produced the sort of album that you could get from Bryan Adams. It was supposed to be 'marketable' and would notch him up big sales. But the reality was the 2005 album had modest sales and the 'marketable' album had NO sales. When the non-existent sales were tabulated, he found himself without a recording contract and the 'marketable' album had so damaged him that even booking club dates were difficult.

That's too bad because he really had talent before the label just 'knew' what sound would sell. Expecting Schuyler Fisk or Joshua Radin to stay the same isn't fair to them. Artists grow. But there's growth and there's selling out. Hopefully, Radin and Fisk will grow and explore but what I hope for both even more than that is that grasp how magical the albums they've released are. There are artists with a decade -- or two, or three, or four -- behind them who would do anything to be able to make this sort of music which speaks so directly it doesn't need a complicated arrangement or a small orchestra playing on the sessions.

And as much as I hope they realize that, I hope you realize that as well. We say we want art and not product. We say we want people who can actually sing and not be 'vocalists' because a knob in the control room manages to make them 'listenable.' We say we want real songs, not samples, not rip-offs, not goo-gaa nonsense. So if that's what we want, the question is do we support it when it's out there? If you haven't heard Simple Times, you need to make a point to listen. If you don't, you're only hurting yourself.