We're going to keep on fightin' 'til the enemy's been served
We'll never turn around, we don't care if it takes forever
Men women children will die, we're all in this together
Here we are again, my friend
We're back in Vietnam 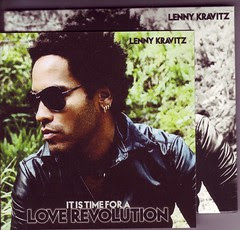 Kat: The above is from Lenny Kravitz' "Back In Vietnam" off his news CD It Is Time For A Love Revolution. A little background.

Back around the time of Let Love Rule (1989), I thought Lenny was an artist to listen to and that the album was something you could enjoy. But, back then, Tracy Chapman seemed the stronger of the two. For those too young to remember, the radio airwaves had been dominated by Middle Aged Men pretending to be teen actors on Miami Vice. No one ever need hear Glen Frey's "You Belong To The City," but he was far from the only one striking pose. Alternative rock had yet to take off -- though 10,000 Maniacs, R.E.M. and others were brewing on college radio -- and outside of the pop tarts of both genders (Stacy Q, New Kids On The Block, Tiffany, et al.) very few artists under forty were getting played on what passed for top forty. Janet Jackson had broken through two years prior along with the Beastie Boys. That really was it. (Don't bring up Mariah Carey from the same period, she was embalmed and controlled and wouldn't break free until the mid-to-late 90s. She sang songs like she was over forty back then.) There was Madonna -- whose first tour found the Beasties opening for her -- of course. And back then, she had something to say and the ability to shock -- she'd yet to go genteel.

Tracy Chapman emerged and was so damn good that they had to not only get her into a late eighties tour for Amnesty, they had to let her do some press. (U2, along for the same tour, was already showing their 'respect' to their elders by sucking up non-stop.) Tracy made an amazing acoustic first album and then she lost me. There were songs I really enjoyed -- even a few I enjoyed while also enjoying the production -- but she never made an album again that I would call a masterpiece the way her self-titled debut was. Her sound got way too cluttered and it would take stripping it down severly for her to finally notch up another hit ("Give Me One Reason") many years later.

Lenny released a variety of albums during this period. I still have Mama Said and 5 on CD, for instance. But he put out a greatest hits and, after I purchased it, there really wasn't any need to play anything else.

With one exception. Let Love Rule. What I thought was a strong, listenable debut but no great artistic masterpiece continued to hold up over the years. I've played it over and over and know the lyrics to every song and can irritate close friends, hello Maggie, by singing along with it at the top of my voice. You really don't sing most of Lenny's songs quietly. Every now and then, Lenny puts out a new CD and there's always a few tracks on it that I really enjoy (and spend a few moments wondering which will be included on a collection) but either they haven't sunk in for me (could be, Let Love Rule didn't seem as incredible as it was when I originally listened to it) or they just weren't living up to most musical standards. The albums, to my ears, tended to sound like collections -- various tracks pieced together -- as opposed to sounding like an actual album, a cohesive statement.

As my appreciation for Let Love Rule has deepened each year, I keep holding out the hope that Lenny's going to produce the heavy hitting album that he's capable of.

Mainly to check my own judgement.

It's holding up. The CD offers fourteen tracks and the kick off is "Love Revolution" which starts immediatly, no build up, no tease, it just kicks in. Lyrically, it reminds me of what many males were striving for in the immediate post-Kurt Cobain (due to his death) period of the 90s. I'll be kind and not note names even though one was part of an 80s college radio band and surely could have gotten to where Lenny goes if he'd really been trying instead of tossing off soundtrack work. As I listened, I thought, "That's an amazing backup band." Turns out I was wrong. It's Craig Ross on electric guitar and Lenny supplying everything else. Sorry to break it to Billy Corgan, but the only one who's pulled that off in recent decades is Prince. Lenny pulls it off and when someone's getting to the level of Prince at his best musical ability there may be little need to say anything else.

But I'll go on. Mainly because Lenny has opened strongly before and then we've all had to wait two or three more songs before he came close to that level again. "Bring It On" continues his call for a Love Revolution and the strong band sound. As the CD plays, you keep waiting for the weak musical moment and it never arrives.

Lyrically, Lenny's wanting a, in case you didn't catch on already, Love Revolution. In the new issue of Spin, the Rock God is explaining he's been celibate for three years. Fortunately for those of us who have no intention of going that route, the Love Revolution doesn't appear to require chastity vows.

"Coffee's hot but the cream is sour," he sings in "Good Morning" and the Love Revolution seems predicated as a necessity based upon the state of the world around us. On "Love Love Love," he makes of list of things the Love Revolution doesn't require which includes TV, politicians, Paris fashions and no drugs -- so he's like Donovan in the late sixties period. That's not an insult. I listen to Donovan to this day. One of the saddest things musically, for me, was the retreat of Donovan and the replacement of him with a lot of guys offering songs about mountains, county roads and fire and rain. The mundane replacing the mystic was not an 'advance' to me.

Toni's first question about the CD was, "What's the love ballad?" Lenny's written a few over the years and created expectations in that. One is "Will You Marry Me?" which makes it for me musically but -- not being young enough to think: "He means ME!" -- doesn't lyrically. I filled Toni in on Kravitz' assertion in Spin that he's not having sex again until he gets married (again). Toni agreed that song wasn't going to make it for her either. So we played "I'll Be Waiting" and "If You Want It" instead. She ranked the latter as better than "Fly Away."

I was still doubting my judgement so I rang up Dak-Ho and begged and bullied to get him over for a listen. I don't really do the hold the phone up to the speaker thing that's been popular for over two decades now. I want to see your face, I want to see if your body moves (in discomfort or in rhythm). He arrived insisting one track only and then we were catching up. (I'm on the road each week lately with Ava and C.I. speaking out against the illegal war.) With just one track to play, I went with "Dancin' Til Dawn." Dak-Ho played it straight faced. After the song finished, he said, "Okay, now we talk." Than added, "But you can keep the CD on." The song that followed ended up being his favorite ("This Moment Is All There Is") and he seemed really hurt that it wasn't the track Toni picked as her favorite. Which is a real sign of a strong album -- not just that you differ on favorite tracks but that you're bothered that someone close to you doesn't, as Dak-Ho said, "get how great this is!" (When I called Toni to tell her about that she said she couldn't believe that he didn't "get how wonderful 'If You Want It Is'. I'm calling him right now.")

Mags showed up late -- natch -- today and wanted to hear what Toni and Dak-Ho had been disagreeing over. "They're both insane," she huffed after listening, "'Back In Vietnam' is the killer track." Which is where we came in on this review. It's track thirteen, but no need to be superstitous. Plus, it's follewed by the closer, "I Want To Go Home," which includes this:

When I have to take a life, does that make peace
They say it's in the name of God that I'm the beast
I don't want to stay out here another day, oh
I'm just trying to get back home in anyway

Along with that track, I could make a very strong case for "Another Door" being the best of the fourteen. But give it a listen and decide for yourself. Two things I think we'll all agree on is that It Is Time For A Love Revolution is so much more than just Lenny's strongest album so far and that it rocks.

it is time for a love revolution
the third estate sunday review
kats korner
the common ills
Posted by Common Ills at 4:50 PM