Kat's Korner: This Kind Of Art

Kat: Tuesday, Starbucks released Carly Simon's latest CD, This Kind Of Love. This makes the fourth CD I've reviewed here of Carly's. Moonlight Serenade was a collection of torch songs of the kind Carly covered on Torch (1981), My Romance (1990) and Film Noir (1997) and I still encourage you to check out the bonus DVD. Into White was the follow up and, I thought, an even more successful series of covers because, collectively, they made a statement. I dipped into the vaults to review 1972's No Secrets along the way. So this makes the fourth review I've done here of a Carly CD and I was honestly a little nervous about this one. Carly's recording her own compositions that she wrote and co-wrote plus a song written by Jimmy Webb, her daughter Sally Taylor and her son Ben Taylor. Would it be a huge mis-step on Carly's part? 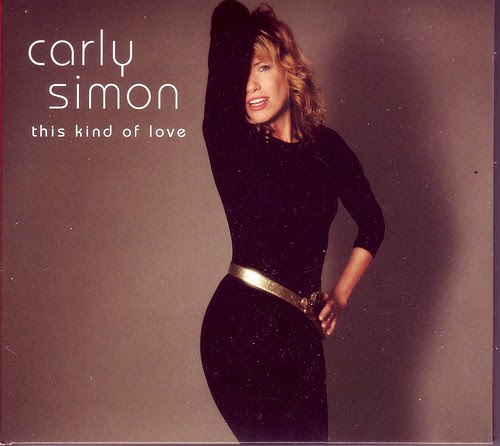 1981's Torch got strong reviews (the original review in Rolling Stone, which ran in an issue with Carly and her two children on the cover, received five stars -- RS has downgraded it in their book of reviews) and sold well for that time period (gold). The follow up was 1983's Hello Big Man which got little promotion as Warner Bros. elected to downsize. One of the standout tracks on that album is "It Happens Every Day" and you may only appreciate how much Carly invested in her vocal performance if you compare it to her version on Carly Simon's Greatest Hits Live (1989). I'll come back to that but the point is Carly followed up with an ecletic album, ecletic in musical form. Some of it worked very well ("You Don't Feel The Same"), some less so. The year of My Romance found her also releasing the amazingly strong Have You Seen Me Lately. Film Noir was followed three years later by her classic Bedroom Tapes. So having done two collections of standards as well as "one" Christmas album (Christmas Is Almost Here was first released in 2002 and then, a year later, with additional songs), I was attempting to figure out, ahead of the CD's release, where this was going to fall? Was it going to be a mixed bag or something stronger?

The advance word that it was a nod to the Brazilian music didn't really ease my nerves. Many a bad dream found me fearing I'd be listening to something like Judy Collins' disastorous Judy Sings Lennon & McCartney whose nadir ("And I Love Her") sounded like a Weird Al parody of "Blame It On The Bossa Nova." And as awful as the arrangement for that song was, Judy was singing in a key way too high for her resulting in a thin, finger nails scratching on the chalk board sound. If I was making a list of ten favorite songwriters, Carly would be on it so I really worked myself into a frenzy as the release of This Kind Of Love approached, fearing the worst and knowing that, regardless of the outcome, I'd have to review it because my silence would say way more than a bad review could.

We were on the road last week, as usual, and had a problem similar to Trina's when we pulled up at a Starbucks Tuesday and I ran in to purchase the album, they didn't have it out on the racks or by the register. And the two clerks working weren't even aware that a Carly Simon CD was supposed to be released. Actually, they weren't even aware that Starbucks' Hear Music was releasing a Carly album. They knew Carly, they knew her very well and were fans of her music. But I had to pull C6 of Monday's New York Times out of my purse, unfold it and show them the photo, limited discography and two paragraphs written by Shelly Freierman before they'd even go check in the back. The male clerk had told me he was a huge fan of Carly's -- and backed it up by breaking into the chorus of "Anticipation" -- and if Starbucks had a Carly CD out or coming out, he would know.

I wondered about that, how employees of a store could not know that something was being released, even at a place that doesn't release that many new items? Tuesday night, I'd visit the Starbucks website and search for the CD. I'd eventually find it, in a listing of "upcoming releases" -- yes, this would be the day it was released -- and the title wasn't a clickable link. For those who don't have a Starbucks in their area, this page is the shopping cart where you can order online. Considering Hear Music got a Grammy win in February, via Joni Mitchell, I was less than prepared for the clumsy roll out and, honestly, worried that it was a portent of some kind.

So I get back to the car and that was Tuesday. Meaning Barack was giving his big "Who is this man? I never met this Jeremiah Wright before! Not in the twenty years of mentorship!" and that was also the radio could talka bout. So, as I explained Tuesday, between speaking gigs, we were listening to the news in the car and I never had time until Tuesday night to listen to the CD. If I'm being completely honest, it was also avoidance. Out of fear.

There was no reason to fear. The album sounds nothing like "Kissing With Confidence" -- the Will To Power song that Carly did the vocals for. But it really reminds of that and, in fact, could have been titled Kissing With Confidence with little problem. As a songwriter, Carly's gift it always to chart what we're all going through and to do so with a sense of perspective. The confidence shines through on this CD.

It'll be top three of 2008's best and, unless someone works really, really hard between now and December, it will be my pick for the best of the year. It's that strong. It's a road album and, by that I mean, you won't stop playing it in the car and you won't stop singing along with it.

"This Kind Of Love" kicks things off and here's where I get back to Carly's vocals. A lot of women emerged as singer-songwriters but Carly truly was the finest singer of the genre. I think Tori Amos continues that tradition today. "It Happens Every Day" in 1983 could have been prettied up and, if you listen to the later live version, you'll grasp that quickly. Instead, Carly used that considerable alto to shade the song with even more meaning. She's shading throughout on the new CD and you'll grasp that from the start with the chorus of "This Kind Of Love" which finds her using a Bing Crosby style swoop the first time she sings the title and then softening it with subsequent deliveries. It's very sexual and, like most of popular music's great singers, Carly's always been a very sensual singer.

You'll notice the skill and talent in her delivery of "Too Soon To Say Goodbye" as well. This is the song dedicated to a friend who passed away (Art Bushwald) and her delicate shading and the way, on a softer key, she's investing so much into the phrasing really drives home how talented a vocalist she's always been.

That's the last song and between tracks one and thirteen, you'll find a wealth of riches. My personal favorites currently are "Hold Out Your Heart" and "How Can You Ever Forget" which require you to sing and snap along. Ava, C.I. and I do every time. They are among the finest and most tender songs Carly has ever written.

Sally and Ben both contribute what I'll call portrait songs and Sally's is the more postive of the two. Ben's is a bit darker. Both are set to a strong arrangement and the music is so strong throughout that you may end up missing the point of both on initial listen. That's because This Kind Of Love really has a band sound. I can't pick out one individual or a solo to praise because the whole thing is seamless. Jimmy Webb (producer) has done his finest work and Frank Fillipetti (engineer and producer) continues to have a strong grasp of what Carly's sound is. Of course, I shouldn't short change the woman herself whose confidence shines through.

A real singer-songwriter sings her songs better than anyone else even if she's a limited singer because she grasps meanings that others don't even see. When the singer-songwriter possess immense talents in both camps, as Carly does, they're able to provide passion, desire, wistful rememberances (see especially "So Many People To Love" on that one) and this is really an amazing album. As you listen, you never doubt that Carly also grasps what an achievement this is because she's sure in her choices throughout. Listen to "They Just Want You To Be There" and grasp that she's pulling off vocally what she was less successful with on "Vengeance" (she came closer to it with "Love Of My Life" but she nails it here). And somewhere as you listen (maybe "Hola Soleil"), you'll grasp why she remains the most interesting artist of her peer group: while everyone else chases down trends, Carly digs within. Of all her albums, Spoiled Girl came the closest to chasing trends (I think the album has many strong moments) followed by the very eclectic Come Upstairs. Those were in 1985 and 1980 respectfully. While others seem to go from mid-life panic to mid-life panic, Carly just seems to go deeper.

It's probably difficult to both take part in an extensive make over and also remember what your true gifts are so confidence is really important as an artist continues the career. "Continues" is all many hope for. Carly actually progresses and This Kind Of Love especially puts her male peers to shame, the ones her own age still trying to play James Dean (often with receeding hairlines), still singing new songs about falling in love for the first time. Way back on Hotcakes, Carly was singing about her "Older Sister" and how she was fascinated by her. Today she's become that wonder inspiring woman and captured it in song. A tremendous accomplishment. As strongly as I recommend This Kind Of Love, I also recommend Elaine's post last week where she revisits Carly's career and shares her own favorite pick from the album, "People Say A Lot." It's the "You're So Vain" and/or "That's Not Like Him" of the album and you won't want to miss it.

[Kat note: Thank you to Taylor who e-mailed to inform I'd typed "Midnight" in this review when I meant "Moonlight."]
Posted by Common Ills at 10:16 AM