Kat's Korner: The art of india.arie

Kat: I never encounter music in the 'normal' sense anymore. Consider it the downfall of Tower Records and others, a shift in the dynamics as the country has moved to downloads or just the company I keep.

Take a new song Drew Ramsey has written entitled "Ghetto." "There are places in Havana that remind me of Savannah, parts of West Virginia that might as well be Kenya, parts of New York City, parts of Mississippi, parts of Tennessee look like another world to me . . ." are the lyrics that go over one this great guitar rhythm (one, TWO, three, FOUR, one, TWO, three, FOUR). And I encountered it when Betty's oldest son was playing it. I didn't know the song, thought it was a great one, thought it was so great, it had to be an old one and C.I. was teaching him a classic I'd never heard of. Then Betty blogs Tuesday night (previous link) about the album it's from and I'm reading that half-asleep before calling her to tell her I'll review the album. 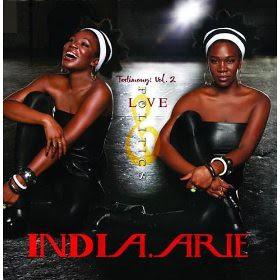 It's india.arie and there's no question of arie's talent so between "Ghetto" and Betty's praise for the album, I download it on Amazon Wednesday with a few reservations -- which I'll get too. None of the reservations are about the album itself, Testimony Vol. 2: Love & Politics -- an album which doesn't just easily stand alongside The Miseducation of Lauryn Hill as one of the strongest contemporary soul albums in recent years, it can stand alongside the best of Marvin Gaye's work including, yes, What's Going On?

But in three reviews of this fantastic album, I'm not seeing that realization. When I announced I'd be reviewing it, well meaning people started e-mailing me reviews. I read two of those and a third that a friend at a local paper passed on in person Saturday afternoon. The reviews left me wondering not just what album they thought they were listening to but whether or not they grasped how autobiographical reviews can be -- even when they're not noting, as I have, the first time they saw a man's cock?

Because reviews can be very autobiographical and never more so than when the reviewer attempts to act as if there's some sort of empirical truth he (it's usually a man) has reached that has nothing at all to do with something as variable as opinion. The fellows are never more subjective than when insisting they aren't.

Which is how a thread appeared in two of the three reviews: india.arie writes and performs great love songs but she just can't handle the political. This subjective view rests on the assumption that love and politics are not intertwined in india's work -- a view which even the most casual listen to Testimony Vol. 2: Love & Politics should reject.

How did the fellows miss that? Maybe because the person who can't handle the political is the reviewers? I'm not sure whether it's not being able to handle the political period or just not being able to handle the political from a woman. But the two guys pushing this mistaken belief tally up the songs and omit a few to 'prove' their point. One of the most obvious songs they ignore is "Pearls." This song, which india performs but did not write, draws no lines between love and politics. Maybe the fact that a variety of love -- and not just love that leads to sex -- is on display confuse the fellows? Maybe when india's singing about the love of a mother for her child, they're bored or just not registering?

The mixture of love and politics or the postulate that love can bring about salvation and/or peace is not something india just pulled out of thin air. John Lennon and Marvin Gaye are two whose art has long explored that possibility.

In her foot stomping, hand tossing, shake your ass "Better Way" (india's own composition) she insists, "I know there's got to be a (better way)." It's the sort of belief John would flirt with ("Imagine," for example) and Marvin would outright embrace ("Wholy Holy"). Far from being an oddity, india's exploring the mix that some of the strongest artists of the 20th century attempted. Possibly the boys think all 'political' songs need to come with the finger-pointing sneer of early Bob Dylan? Even Dylan doesn't do those songs anymore. He long ago moved on to his end of times and it was up to artists like John and Marvin, Aretha and Janis to offer that some form of salvation might be possible -- in this world or another.

When "Better Way" (one of the most amazing and hard driving tracks on the album) ends, we're taken to "Grains." "Grains" is actually three interludes -- tracks one, eleven and fifteen -- which, combined, total less than two and a half minutes and possibly some reviewers felt they were disposable and could be skipped?

Here are the lyrics to track eleven:

Every human being
Who is
Who has been
And who ever will be
From the most famous
To the most anonymous, yeah
We're created from the same thing
You know how many hairs are on every head
And the intention of every heart
No matter the words we said
And every time I think I'm separate
I remember we're created by one god
I'm grateful that
You created me from the same grains
With the same thing
I'm grateful that
You never cease to amaze me
The way you love me

The reviewers 'seeing' divisions are seeing things india clearly does not. That's obvious throughout the album but especially so with the "Grains" interludes.

"Long Goodbye" is clearly a love song . . . and a lot more. Both within the song itself and the context of the album. When John and Marvin explored this type of terrain, critical response is generally silence or some philosophy buff cum music critic will start pontificating about the "exploration of 'the eternal feminine'." It's really funny how they always find men who can explore the so-called "eternal feminine" (that thread comes from philosophy grad students with nothing better to do, they've spent decades now applying it to Nietzsche). A man writes "universal" (read "male") and can also do a a wonderful job exploring (tapping into or just tappin'?) the 'eternal feminine.' Goodness, if they could give birth, they really wouldn't need us at all, now would they?

Seriously, when a man walks this terrain, he's applauded for his effort but when a woman does, she's usually not given an iota of artistic credit.

Let me move over to my reservations. I bought the album from Amazon Wednesday. It was at the incredible price of $5.99 for the full album (it's currently $8.99 for the entire album -- still a bargain) and I have no idea why downloading from Amazon requires installing their Downloader approximately every fifth download but that's how it's going. Knowing that this community prefers Amazon to iTunes and knowing other people are having to install Amazon's Downloader repeatedly, I'm bringing that up. It matters when you're in a rush to download and think, "Oh, I can do this in mere minutes," but instead find out that you have to (yet again) install the Downloader. So if you're thinking of downloading, factor that into your time management.

My other reservation was, "I'm reviewing another album by a woman?" I love female artists. I love male artists. I love groups. I do not attempt to create a ratio of X to Y, but I do hope I give women at least equal footing. If I give more, that's fine. But I was thinking about a drive by e-mail whining that I'd reviewed Tracy Chapman, Schuyler Fisk, Phoebe Snow and Janis Ian this year and the only man was Bruce Springsteen. You know what, not only have I reviewed more women this year, I've also praised them. I don't know where the male artists are? But they're not doing much of anything I can see and appear to have all embraced "the happy idiot" they once longed to be as they pocket "the legal tender." Maybe that'll change as the year continues but the last months of 2008 and the start of 2009 have featured some very strong work by women.

And when I look at the three reviews of india.arie's Testimony Vol. 2: Love & Politics, I'm really glad I'm noting these strong artistic contributions by women because they appear to be sailing over the fellows' heads. For india, that's probably okay and the reason is this album doesn't really need critical praise to sell.

You can be as small-minded as the bulk of male critics and still fall in love with, for example, "He Heals Me." You can strip all the politics out of it, all the spirituality, reduce it to a 'mere' love song (or is it a 'silly love song'?), and you still can't help moving with the beat or feeling a rush of a joy when india sings "life" in the phrase "cause he's already changed my life" or the way she bends "accepts" right after only to toss it up to a higher register next

And joy really describes the entire album. It's what had Betty's son wanting to learn to play "Ghetto" on the guitar, it's how "Better Way" lifts me even when I'm about to fall over, it's there in the album closer "A Beautiful Day."

Early in the morning
It's the dawn of a new day
New hopes, new dreams, new ways
I open up my eyes and
I open up my mind
And I wonder how life will surprise me today?