Kat: Somewhere around track five of The Good Stuff, you wonder how many singer-songwriters are slitting their wrists or at least tying a nasty one on? That's because The Good Stuff is the debut album of Schuyler Fisk, it's independently released (available at iTunes and Amazon.com) as a download and I can easily name fifty releases in the last five years with huge recording budgets that didn't come close to achieving what Fisk does.

I wonder who you're loving now?
I'm guessin' we won't work things out.
You know what they say,
You can't have it so you want it bad
I'm way past that believe me.

That's track six, "Hello" -- a song you can easily imagine pouring out of car speakers all summer long. A bouncy, number with Fisk's calm vocals that catches the ear with a sing-along melody and has lyrics that you start absorbing a bit after you duh-duh-da-da-duh along with the song. That's when the "I made you hate me" and "you've erased me" lines really start to register. You may be in the midst of a duh-duh-da-da-duh when you grasp this isn't like "Soak Up The Sun" or any other perfect-for-summer-radio song. 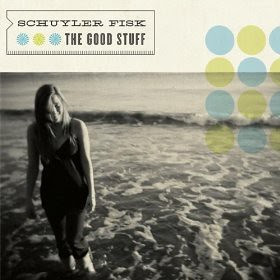 Which is so surprising when you start to think about it. Fisk is an emerging actress who probably has a lot to prove (you don't write songs like she does if you don't). It wasn't all that long ago that Minnie Driver was savaged for recording cover songs. Here comes Fisk, and without the Wallflowers to back her up or a label behind her, stepping into one of the most restricted fields for women. Women can sneak in as a cupie doll or a pop tart and, once in the door, strut their stuff and prove they've really got the chops but Fisk's not posing for the cover of Rolling Stone in her underwear, she's not being interviewed while in bed with the (male) reporter Spin sent over. I've yet to read or hear her talking about what line of make up she uses.

Though her voice is nothing like Joni Mitchell, she reminds me of Mitchell. She reminds me of Carly Simon. She's got the same confidence of both women, the same kind of self-assurance about the art. Joni had everyone -- everyone -- doing covers of her tunes and also a huge string of ex-boyfriends who weren't threatened by her and were happy to offer her accolades publicly. (And don't think male artist approval didn't make the critics straighten up their spine and treat Joni like the artist she was as a result.) Carly's path was a bit different with far less help and, therefore, a real need for the audience to discover the songs on their own -- which they did. Both women have many accomplishments to their names and continue to make strong music (Shine and This Kind Of Love being the most recent examples) but think of how many women tried to do it their way and got ground down and ignored.

It's enough to make me half wish Schuyler was shopping for underwear-to-turn-into-outerwear with Britney Spears, getting tips from Madonna about how much skin you can get away with exposing, letting Beyonce tell her about the wonders of having the whole world praising your ass -- anything but doing the actual work required to qualify as a genuine artist.

But then she does a song like "You're Only Lonely," which stands on its own while also paying homage to Roy Orbison's "Only The Lonely," and I toss out concern for where she goes next and am just damn glad she's given us The Good Stuff today. And take comfort in the fact that, should things get especially difficult (as they most likely will), this is the woman who wrote, "It's hard for me to breathe, but you can't keep me, I only showed up because they said you wouldn't be there" ("Cold Heart") and "At least we know we were high but we came down" ("Other Side Of Love"). Maybe she's up for what follows?

Let's hope because the album she and Dave Bassett have produced is one of the great pleasures of 2009. Not "so far" -- period. When you hear something like this, you know it's among the best, you don't need to wait until November to figure out if it'll make the end-of-the-year list.

The only struggle you really have listening to The Good Stuff is figuring out which song is your favorite? Tuesday, Mike wrote about the album and noted he was stuck on the first five tracks because he loved them so much on first listen that he had no idea what the other nine sounded like. I can understand that because track five happens to be my personal favorite, "Fall Apart Today."

The above lyrics do nothing for you if you haven't heard the track because you really need to hear the guitar and hear the vocal. And that's one of the problems with an independent release, getting the sound out -- and not just the word.

Fortunately, you can visit Schuyler Fisk's MySpace page and hear two of the tracks from the album (plus a third track that's not on the album) for free. If you listen, I'm pretty sure you'll be downloading (from iTunes or Amazon) shortly and then attempting to play The Good Stuff for as many friends as you can round up.

I have no idea who the "you" in "Hello" is, but my "you" that I think of when listening to that song is the album itself. And I picture this seeping into a generation, like a dream, like Sarah McLachlan's Surfacing did a decade ago.