Kat's Korner: Combo is the answer

Kat: Last spring, Ava and C.I. weighed in on CBS' Streisand: Live In Concert, observing, "And Barbra did look, in the term trademarked to her, gorgeous. The big surprise was the voice. Not that it was still intact. That's proven every time Columbia releases the latest Barbra album. She's got a range like no other. And we weren't surprised by her performance of 'The Way We Were' which found her stroking the notes in a warmer way, giving it a new shading. But when she broke out Harold Arlen and Ted Koehler's 'When The Sun Comes Out' and delivered it with an intensity that may have surpassed her original recording (on 1963's The Second Barbra Streisand Album), we were stunned." "When The Sun Comes Out"? Sung better today than in 1963? I didn't catch the special but Barbra seems intent to prove them right. 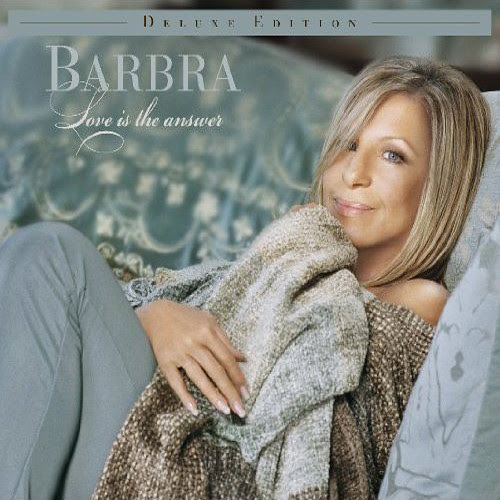 The new release debuted Tuesday, Love Is The Answer. It's sold out at many Targets, on sale at Borders, downloadable everywhere. But before you purchase, a word of advice: Don't.

Or at least: Hold on.

The orchestral disc is fine. But it's the combo one that really makes the set.

The arrangements on the orchestral disc are, at times, just a little too fussed over. At times, it feels like someone who had the choice of using everything (and the budget to do so), pretty much did. Often to the detriment of the songs themselves. By track thirteen, I was convinced, had there been a track 14, a theremin would have showed up next.

The voice is gorgeous enough. Weighted down with layers of gloss, it's just a bit too much for me. With the Diana Krall Combo, Streisand's voice takes on a tension that is often missing in the orchestral versions. This is most obvious with the two versions of "Gentle Rain." Streisand approximates the tension until a minute and three seconds in when suddenly the orchestra (arranged intentionally to sound like "Danny Boy"?) is all over the place, competing and not complimenting. Equally true is the Krall Combo has rhythm.

Krall, who produced both sets but didn't arrange the orchestrated performances, provides a steady, driving accompanyment with her piano work. And the drum brush work on "In The Wee Small Hours" is amazing (credit to Jeff Hamilton). The combo recordings repeatedly demonstrate that when you have far fewer instruments to work with, the work goes deeper. And it's amazing how versatile the combo is and how they are able to mimic everything from rain to a sun rise.

"All alone, the party's over," Streisand sings in Fran Landesman and Tommy Wolf's "Spring Can Really Hang You Up The Most." And you believe it on the combo version but as convincing as Streisand is when singing with the orchestra, there are just too many fussy moments, too many 'clever' arrangements that indicate someone didn't grasp the lyrics.

Barbra Streisand is a huge recording talent and I'd never balk at tickets to see her live; however, a large portion of her recording career does not speak to me. I can, especially looking back, appreciate those early albums that electrified a nation, back when Barbra and Bob Dylan were the counter-culture. And I can even go along with the Richard Perry make over, when Streisand goes from Sadie, Sadie, Married Lady to Crooner of the Canyon. By contrast, the 80s Don Johnson duet typifies all the things I choose to skip in Streisand's career. It's too calculated, too intent upon turning a moment into a spectacle and driven so by 'high concept' that no one takes the time to think through the music.

To me, that's the orchestrated version of the songs. It's just too much precision and it begins to trap the Streisand voice, to mummify it.

She may be faking it (she is a highly talented actress) but her vocals on the combo version of "Make Someone Happy" show life and discovery. On the orchestra version? It's canned. It's phoned in. And any life she might bring to the song has to squeeze in among the grid. "Grid." Not "arrangement." Those are too cold to be considered arrangements.

"Where Do You Start?," written by Alan and Marilyn Bergman with Johnny Mandel, almost pulls off the orchestrated arrangement but then, at two minutes and seventeen seconds in, there's the orchestra apparently thinking (encouraged to think?) people will be paying to hear them as opposed to Streisand. No such problems plague Barbra's work with the combo.

Barbra Streisand is a beautiful woman and she became that by not trying to fit someone else's standard. She became that by being her own beautiful self. I say that because when she started out, she was not considered attractive. And the often told story about those early days goes like this: Barbra's the girl no one looks at twice, but then she opens her mouth and every man in the room wants to protect her.

You get that on the tracks with the combo. Working with them, her vocals are more natural and more immediate. And, yes, more beautiful. If Susan Boyle was able to do what Streisand does on "Smoke Gets In Your Eyes," every man (and probably many women) would rush the stage. Also on that song, she proves another oft told story about Streisand since the beginning of her career, she turns a song into a mini-movie. Go to three minutes and one second of "Smoke Gets In Your Eyes" combo version and to three minutes and five seconds of the orchestra version and notice how the combo performance benefits from accents while the orchestra comes across like a wave trying to splash Streisand into the shore.

The standard version of Love Is The Answer is nothing to sneeze at. It's a solid Barbra Streisand album and that's more than enough for her millions of fans. But the Deluxe Version gives you twelve tracks that actually qualify as classics and art, twelve tracks where one of the world's most gorgeous voices is set off to masterful effect.

barbra streisand
love is the answer
diana krall
kats korner
the common ills
Posted by Common Ills at 8:35 AM