Kat: Jakob Dylan? Seems like just yesterday he was an MTV hottie but that was 1996 ("One Headlight") and it was 1997 that his deeply blue eyes were staring from a Rolling Stone cover. He was the lead singer, guitar player and chief songwriter of the Wallflowers. I stayed with the group longer than most. I can remember being at a private performance promoting Red Letter Days. It was me, the band and six other people in the audience (plus wait staff). Thing was, it wasn't supposed to be such an intimate performance. 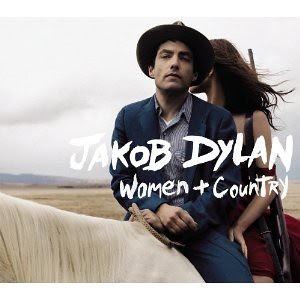 Now on the one hand I loved it. Can you imagine seeing a strong band -- and the Wallflowers were a f**king awesome band, I think 2000's (Breach) was their strongest effort -- that you liked in that kind of setting? But there was Maggie hollering in my ear that as cool as it was it's like -- and then the song stopped though Maggie was still shouting -- "EVERYONE'S MOVED ON!" Maggie registered quickly and tried to save the moment by yelling "Woo-Hoo!" and jumping up and down but even her breasts -- and they are significant ones -- could not distract from the remark or the truth in it.

I liked Red Letter Days. Didn't love it, but I liked it. Then I blinked and heard Jakob was solo, that the band had a 2005 album (which I still have never heard) and that he had a solo album. I felt both behind the times and unfaithful. So that was it. Bye-bye, Jakob, best to you.

Last week, I was cursing the fact that I hadn't packed Joanna Newsom's Have One On Me in any form (including digital) as we were driving here, there and everywhere. Ava and C.I. had put some Joanna on an iPod so I hooked that up and after "In California," a song started playing with a weird (in a good way) sound to it. It was "They've Trapped Us Boys." And it was Jakob Dylan.

"Is this new?" I asked. Asked? Gasped. And then it went into Mary J. Blige. And no offense to Mary, but I was wanting more Jakob. I pouted. We got out to speak to a college group about the Iraq War. I stuck to the video WikiLeaks released and channeled all my impatience into that. We got back in the car after and C.I. said, "I'm pretty sure I have the album on disc, with the liner notes, back at the hotel."

Sighing, C.I. grabbed Wally's guitar, tuned it a bit and then played and sang "Smile When You Call Me That," noting this would probably be my favorite song on the album.

And, know what, I think it is.

But it's a difficult call. 11 tracks make up the second solo album, Women + Country. Jakob's miked better than he's been since (Breach) and his vocals are a real treat. Even better, his vocals are set off by some amazing backup vocal work by Kelly Hogan and Neko Case. Such as on "Down On Our Shields" which includes the following lyrics:

It's a river of tears
And we're in over our ears
In the dark it rides off with our better years
It's a bottomless well
It's a little overkill
It's the end of a dragon's tail
That's whipping around our heels
But we don't bow, we make no deals
If we go down we go
Down on our shield

And as important to the above is Case and Hogan's "Down we go" at various points of the song. It's an album of textures and riches and "Holy Rollers For Love" is among the stand out tracks.


But, yes, for me the standout song is "Smile When You Call Me That." The guitar work, the pounding drums, the melody, the way Jakob avoids the obvious and takes pauses at various unexpected places, it all adds up to the most riveting song he's done in years: "Now I'm drunk and you're insane, I can't quit and you won't change." It reminds me of Springsteen circa "Rosalita" when he was doing some really amazing stuff but you knew even more was just a little ways down the pike. It sounds like a Hey Look At Me! moment with lots more to follow.

Women + Country contains a lyric booklet (no photos of Jakob other than the cover of the album) and lists for $11.99. Currently, it's $9.99 for CD or download at Amazon.