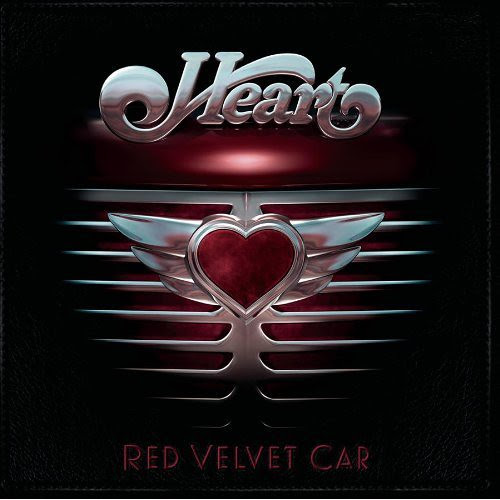 Kat: "How much talking does it take to talk about your bad mistakes?" asks/howls Ann Wilson on the second track of Red Velvet Car. Fortunately, she's more interested in rocking than talking.

It was America's bicentennial. My oldest niece was in a panic because she had to do a diorama of Betsy Ross creating the American flag. And it was summer school because she'd goofed off. The project was due the next day and, due to the slacking that landed her in summer school, she didn't really feel she could go to her parents on this one which is how we ended up hitting all the dime stores in the area looking for anything that could be used in the diorama.

Finding some of the basics wasn't too difficult. There was some generic bears and Goldie Locks package with a table and chairs. We could use one of the chairs for Betsy to sit on. Since it was 1976, finding flags everywhere in all sizes and forms (including the original 13 stars one) was no problem. But we couldn't find any Betsy. Finally, it came down to Malibu Barbie or the Bionic Woman. We went with Lindsey Wagner. Back at the apartment, I called my friend Lou who could sew anything and told her we had a 12 inch doll we needed a colonial costume for. While she got busy on that, I dug the wedge heel boots out of my closet. They were then dumped on the floor as I turned the box they came in over to my niece to use for her stage and backdrop.

We were rushing around like crazy and just when everything -- including giving Lindsey Wagner 'colonial hair' -- was coming together, Heart's "Crazy On You" comes blaring over the radio. We did air guitar and sang along. It was a song you couldn't escape on AOR (Album Oriented Rock) radio that summer. The diorama ended up perfect and my niece passed summer school with flying colors.

Two weeks ago, while I'm on the road, she calls me up and says, "Aunt Kat, remember . . ." And recounts the story above which I do remember very well. We were laughing as we took turns adding details to the story. I asked her what brought all this back and she told me she'd just downloaded Red Velvet Car.

That's Heart's new album, their first studio album since 2004. Sisters Ann and Nancy Wilson are back and the best news for Heart fans are that they're rocking out.

From her first notes on "There You Go," Ann's demonstrating that she still stands with the vocal giants Janis Joplin and Robert Plant. And no one can bend a voice like Ann. She's got the notes, she's got the power, she's got the shading. This woman remains the finest voice -- man or woman -- in rock music today.

With Ann and Nancy and various revolving members, Heart's added various tracks to the rock canon -- "Magic Man," "Heartless," "What About Love," "Alone," "Never," "All I Want To Do Is Make Love To You" and "Barracuda" among them. In the process, they were a rarity, women who could get played on AOR. Rock radio found no woman worthy after the death of Janis Joplin. They briefly flirted with Joni Mitchell but that was really it for the first half of the decade. Along came Ann and Nancy and Christine and Stevie. Christine McVie and Stevie Nicks who were getting airplay on the songs they wrote for Fleetwood Mac such as "Rhiannon," "Landslide," "Dreams," "Gold Dust Women," "Sisters of the Moon," "Sara," "Sugar Daddy," "Don't Stop," "Say You Love Me," "You Make Loving Fun" and "Think About Me."

To be a woman who loved rock then was something glorious. While Joni, Carly Simon and assorted other women certainly rocked as hard as Elton John and other light-rock men played on AOR, because they were women, they didn't get the airplay. A woman had to rock it twice as hard as the average guy to get the airplay. As the seventies were winding down and the eighties were reving up, many AOR stations would end the year with a rundown of the most requested songs. The top three from 1981 to 1983 more or less remained the same. There was Led Zep's guitar classic "Stairway To Heaven," of course. But the real news was that Heart's "Barracuda" from 1977 was holding on and that the new battling titan was Stevie Nicks' "Edge of Seventeen." Stevie was doing solo work (such as that song) and Fleetwood Mac work. And it looked like women might achieve parity. Then AOR, still calling itself AOR, quickly got lost in the Miami Vice synthesizer sounds and women were pretty much locked out except for Stevie and the Wilson sisters who'd already earned their stripes during the briefly open window.

Heart caught a lot of flack in the mid-80s when they returned to the pop charts (they'd been played on AOR even when they weren't having hits). They were accused of selling out because they had a synth sound on many tracks, because they were working with outside writers other than Sue Ennis, because they were having hits. I'd rather hear "Alone" than Glen Frey's "You Belong To The City" and would argue it has more honest emotion than any thing Frey, Phil Collins, Don Johnson (yes, kiddies, he was briefly a radio star) served up at the same time. Was it everything I wanted from Heart? No. But neither was the latest from Aerosmith which was also working with outside writers, also adding synths but not getting any of the flack Heart so regularly did.

I knew it was over for them, their pop chart run, when I first heard "All I Want To Do Is Make Love To You." I knew it because young kids were singing the chorus and really into it. But they hadn't caught the song yet. When they did? It was a period of mindless material and when they caught on to the plot twist and realized the song had a little more to say than rah-rah-get-your-rocks-off, that was it.

Heart continued the formula that had brought them back on to the pop charts for a little bit longer, they started a sidegroup (Lovemongers) and then, when most people didn't expect it, Heart released one of their finest albums: The Road Home. Not only did they serve up some of their 70s classics, they brought more rock into their 80s hits and via "Up On Cherry Blossom Road" demonstrated that Heart was never, ever to be counted out.

It also served to announce that, hell or high water, Ann and Nancy were together. And now here they are with Red Velvet Car and the album's already a top ten Billboard hit. Possibly because it sounds a lot like The Road Home if that had been a studio album, meaning the music is the bedrock, natural music, real music, performed by actual people.

"Sunflower" is a song Nancy takes lead on and she slips right into the groove doing instinctively what Sheryl Crow appeared to be after (but never quite accomplishing) on Wildflower. In fact, to be the ultimate in classic radio, all this song is missing is harmony vocals from David Crosby. The album's classic, however, is "Sand." This 1997 song the sisters wrote with Sue Ennis and Frank Cox is the standout of this album. And it's a testament to how strong the album is that it's the closing track. (If you buy the disc at a store, it's the closing track. If you download from iTunes -- I did -- you get two additional studio songs and a video; download at Amazon and you get a video bonus as well as live versions of "Never" and "Magic Man.")

The whole album builds to that moment and there's not a track that has you reaching for the remote to skip it. "Saffronia's Mark" would have been a strong Heart song and performance on any album. In fact, listening to it, you might find yourself wishing Stevie Nicks would cover it on her upcoming album. It would be a comfortable fit because the Wilson sisters and Stevie didn't just prove women could rock back in the seventies, they did so without resorting to the "I hate girls" pose that so many would be rocking women have attempted over the years. Whereas many men and the pud-teasers like the Runaways made sure women felt they were at a concert to serve men, the Wilsons and Stevie, with their songs and their performances, always telegraphed, "This is your rock party too. Have fun." So how appropriate that the title song is one of friendship and rescue. Ann hollers, "Just call and tell me where you are.'' And she hollers it with such strength, you just know she and that Red Velvet Car she's coming in are going to be able to protect you. And that's part of what makes the album such a smooth ride.