Yesterday's death toll in the latest attacks on Iraqi Christians in Baghdad has risen to five and there are over thirty said to have been left injured. Vatican Radio reported on the violence and Chris Altier interviewed Monsignor Philip Najim, the Apostolic Procurator for the Chaldean Church in Rome.


Msgr Philip Najim: They are practically taking any hope from the mind of Iraqi population and they are telling them, "Leave the country and go out." And this is also, I'm telling you, yes, it is against the Christian people, there is a persecution. They are attacked because [they are] a minority in the country. But at the same time, you know, they [assailants] are attacking the Muslim people. So the whole Iraqi community, the whole Iraqi population is targeted. The whole thing depends on the responsibility of the goverment, the front of protecting the people, protecting the society.

Chris Altieri: What is your impression of the sensitivity, the awareness of the international community, to the plight of Christians?

Msgr Philip Najim: This is, I think, the duty of the international community: To protect not only the Christian community in Iraq, not only the whole population in Iraq, but also the humanity everywhere because if we are only talking about the terrorism in Iraq, this terrorism in Iraq, this integralism, it's going to be spread in the whole area and it will be very difficult to control it. So the international community, it has to interfere, the [United Nations] Security Councilhas to interfere, you know, to put an end to these attacks and to this integralism.

As Christians converged on their churches Wednesday to seek counsel from their religious leaders, the capital's Syrian Catholic archbishop made an emotional appeal for Western countries to come to their rescue.
"It would be criminal on the part of the international community not to take care of the security of the Christians," said Athanase Matti Shaba Matoka as he tried to console members of the Baghdad cathedral's congregation.
"Everybody is scared," he told reporters. "People are asking who is going to protect them, how are they going to stay on in Iraq. We are trying to encourage them to stay patient."

Jomana Karadsheh (CNN) reports that KRG President Massoud Barzani is declaring Iraqi Christians are welcome in the KRG: "I want to let them know that the Kurdistan Region is open to them. If they want to come, we will protect them and provide them with all services. We are extremely sorry for the crimes they have been subjected to and we condemn these criminal acts, they are innocent people and a precious part of this nation."

This is one of the biggest stories coming out of Iraq currently so if someone, for example, discusses on live media Iraq and they can't mention this, they're deceivers. There's no excuse for it, they're just liars. Yeah, I'm talking about grant baby Nir Rosen who's been applauding Nouri al-Maliki forever and a day (because of common roots that no one's ever supposed to have the temerity to notice). Nir Rosen is a piece of trash. He's always been a trash and he'll die a piece of trash. Amy Goodman's a foundation baby as well which is why she presents Nir as independent. Goody's never once told you about the targeting of the LGBT population in Iraq and she didn't tell you about it again yesterday when she and Nir were waxing over Nouri al-Maliki and Moqtada al-Sadr. It says a great deal about both of them that they thought they could get away with the crap they offered as 'information.' Nir's been declaring for months that Nouri would be a great prime minister.

That conclusion isn't based on reality because the reality is that everything has gotten worse under Nouri -- the corruption, the lack of utilities, the persecution of women, of Christians, of Sunnis, of the LGBT community . . .

Apparently the thug sect of the Shi'ite community has been underrepresented in the public exchange so Nir Rosen was needed to act as megaphone?

March 7th, Iraq concluded Parliamentary elections. The Guardian's editorial board noted in August, "These elections were hailed prematurely by Mr Obama as a success, but everything that has happened since has surely doused that optimism in a cold shower of reality." 163 seats are needed to form the executive government (prime minister and council of ministers). When no single slate wins 163 seats (or possibly higher -- 163 is the number today but the Parliament added seats this election and, in four more years, they may add more which could increase the number of seats needed to form the executive government), power-sharing coalitions must be formed with other slates, parties and/or individual candidates. (Eight Parliament seats were awarded, for example, to minority candidates who represent various religious minorities in Iraq.) Ayad Allawi is the head of Iraqiya which won 91 seats in the Parliament making it the biggest seat holder. Second place went to State Of Law which Nouri al-Maliki, the current prime minister, heads. They won 89 seats. Nouri made a big show of lodging complaints and issuing allegations to distract and delay the certification of the initial results while he formed a power-sharing coalition with third place winner Iraqi National Alliance -- this coalition still does not give them 163 seats. They are claiming they have the right to form the government. In 2005, Iraq took four months and seven days to pick a prime minister. It's eight months and three days and still counting.

Will it be today? Supposedly a deal's been reached.

Nir Rosen says that Nouri has "the support of some countries in the region." The region may just be Iran for Nir, but Iran's actually in the minority. And, no, Jordan, Saudi Arabia, Lebanon, Syria and Turkey were not pulling for Nouri. As Bushra Juhi (AP) observes of the reported deal, "The deal reached late Wednesday reflects a significant victory for neighboring Iran, which had pushed for al-Maliki's return." See Elaine's "What they actually know is much less" for more and also wonder why an Arab region is being 'expertized' by Nir Rosen when there are plenty of Arabs available. Why is it that our allegedly non-racist Beggar Media ("send money!") struggles so to find Arab voices? Find the Arab on Democracy Now! -- but don't make that a drinking game unless your goal is sobriety. Asa'd AbuKhalil posts at Angry Arab News and he's tangled with Nir Rosen and Rosen's 'analysis' many, many times. But don't expect Amy Goodman to sit down with As'ad anytime soon despite the fact that he actually has an education, multiple degrees and a professional background in journalism. Wonder why it is that certain types like Nir are repeatedly propped up, given education grants and breaks and those actually quailified to speak are repeatedly shut out? (You'll notice Goodman do the same thing when the topic is Israel and the occupied territories. She's very good at presenting the pro-occupation Israeli view and the anti-occupation Israeli view but Arabs rarely get invited by her to weigh in.)

The alleged deal was hammered out over meetings Monday, Tuesday and Wednesday. 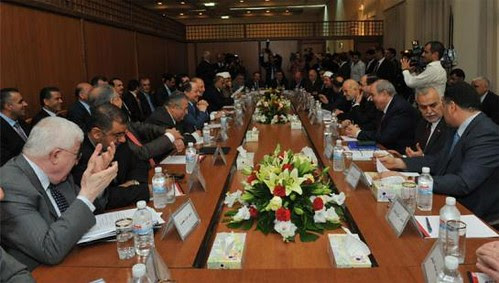 Baghdad, Iraq (KRP.org) - Iraq’s political leaders yesterday agreed to hold the parliamentary session as scheduled on Thursday and to name an individual for the post of Speaker of the the parliament (Council of Representatives). The Speaker post will go to the Al-Iraqiya bloc, which is headed by former prime minister Ayad Allawi.
During the meeting, which was attended by the leaders of all the winning blocs at President Masoud Barzani’s Baghdad headquarters, agreement was reached on two other points: to create a council for strategic policy and to address issues regarding national reconciliation.
President Barzani, who sponsored the three days' round of meetings, stated that today’s agreement was a big achievement for Iraqis. He expressed optimism that the next government will be formed soon and that it will be inclusive and representative of all of Iraq's communities.


Kelly McEvers (NPR) says, "In Iraq, after an eight-month political stalemate, officials have reached a tentative deal on a new government. Parliament is expected to ratify the deal later Thursday. The new government is expected to look a lot like the previous one, with a few exceptions. What's almost certain to happen is that Nouri al Maliki, a Shiite, will remain prime minister. And Jalal Talabani, a Kurd, will remain the president." John Leland and Steven Lee Myers (New York Times) report with qualifiers (meaning they're smart enough to not announce something as "done" before it happens -- their peers should take note), "The deal late on Wednesday ensured, for now at least, the participation of Sunni Arabs, who supported the bloc led by Mr. Maliki’s chief rival, Ayad Allawi, which narrowly won the most seats in elections in March. The deal was struck when Mr. Allawi’s group relented and agreed to join the new government, said Jaber al-Jaberi, one of Mr. Allawi’s chief allies, despite months of adamantly insisting it would never do so." Meanwhile Alsumaria TV reports, "Al Iraqiya List is due to convene today to decide about its participation in Iraqi Parliament session at 3 pm. Al Iraqiya has three candidates for the position of Parliament Speaker namely Osama Al Nujaifi, Qutaiba Al Jibouri and Mohammed Tamim. Al Nujaifi is the most likely candidate to win, Al Iraqiya revealed. Heads of political parties agreed on Wednesday to exempt Saleh Al Motlaq, Zafer Al Ani and Rasem Al Awadi from Justice and Accountability Law measures which will allow them to take part in the political process, Al Iraqiya senior official Jamal Al Batikh said."

What first moved you to become such a staunch anti-war advocate?

I don’t know if there is any dramatic personal instance to point to. I just view it as one of the worst problems that faces us as humans. We are murdering people both of our country and others. War is demolishing the separation of powers in our nation, eroding our civil rights. It’s so devastating to our economy, the environment and to the risk of nuclear proliferation. We have to put an end to the idea that wars are ever acceptable and justifiable.

The Hampton Roads economy is 47% defense related. What is your message to those whose economic livelihood is dependent upon a robust military?

READ THE REST AT ALTDAILY