So Iraqis protested again on Friday and the Western media couldn't be bothered. 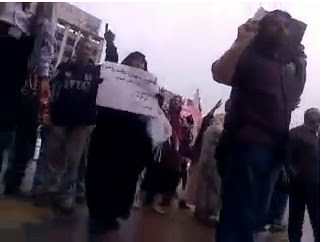 Many took to the streets and overcame obstacles to march in Baghdad's Liberation Square. 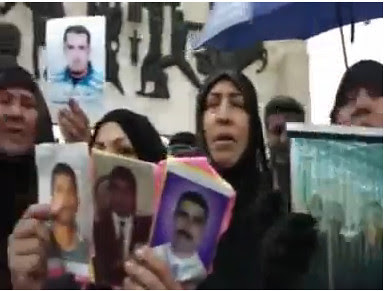 This included the women of Iraq. And those aren't photos of Justin Beiber or some pop star they're holding up. 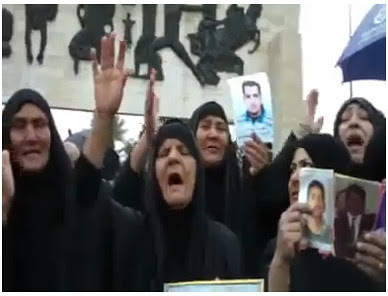 Those are photos of their loved ones -- of fathers, sons and husbands who have been disappeared into Iraq's many public and secret prisons where they have no contact with their families, where they're held without charge, where a trial may arrive some day, where families are torn apart and don't even know if their loved one is still alive.

In fairness to Nouri al-Maliki, prime minister and puppet of the occupation, we should note that he denies any secret prisons exist in Iraq. And when they're exposed, he goes right back to denying them, over and over. 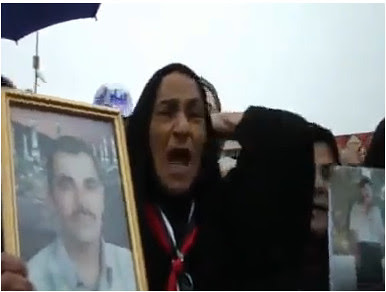 The US press ignored Friday's protests (images from the Baghdad protest and the videos they're from can be found on The Great Iraqi Revolution Facebook page). And, of course, they would. Look at the pain on that woman's face in the image above. Look at the hurt and desperation so visible. Not to turn away from it might mean the US press would have to take accountability for it because they are the ones who sold the illegal war and they are the ones who allow to continue with their half-truths and their evasions. They're the reason a crook like Nouri al-Maliki -- who has already salted millions of Iraqi dinars -- can retain the post of prime minister. Their silence allows it to happen. Nouri's attack on journalists who try to cover the protests (and attacks took place on Friday as usual) is only a surprise if you've expected the US press to ever tell you what was going on in Iraq. Since April 2006, Nouri has conducted a war against the press. The New York Times knows it. When one of Nouri's forces thought it was 'funny' to aim a gun at one of their reporters and pull the trigger (the chamber was empty), the paper quickly got the reporter out of the country. There's another paper that's done the same due to threats but no one's supposed to be talking about the February extraction. But the US papers and US news channels always knew the truth about Nouri.

But Nouri was a fix-it, a band-aid, he'd allow the US to get out quickly! (Five years after he first became prime minister and the US still isn't out but keep kidding yourself that you're a 'realpolitik' type.) He'd rule with an iron hand, yes, but he'd do the US' bidding. Why, he'd be just like Saddam Hussein! But without Hussein's lengthy rap sheet! It was a fresh start -- a despot with a fresh start!

Of course the US press doesn't want to cover Iraq. Saddam Hussein was killed and supposedly in the name of liberation and freedom. But all the US did was install another thug. Another despot who fears the people. Fears the people of Iraq.

What a sad, sad moment for humanity.

No wonder the US press can't report on Iraq these days. The guilt must just consume them. The knowledge that they were complicit in what will be the enslavement of a people under Nouri must be more than can face.

Last Sunday, the number of US military people killed in the Iraq War since the start of the illegal war was 4441. Tonight? PDF format warning, DoD still lists the the number of Americans killed serving in Iraq at 4441.

Reuters notes a Mosul home invasion in which 6 women and 1 man were killed, a Baghdad sticky bombing claimed 1 life and left two people injured, a second Baghdad sticky bombing left four people injured, a Baghdad roadside bombing injured on eperson, a second Baghdad roadside bombing injured nine people, and, dropping back to Saturday for the last three, a police officer was shot dead outside his Ramadi home, 1 man was shot dead in Mosul and two corpses were discovered outside Mosul.

As Jim points out in his note, we couldn't get Flickr to work. It appears to be doing so now but it wasn't working when Isaiah last attempted so I'm sure he's asleep now and we'll get a comic from him later in the week. (The one he did is time sensitive and would need to go up by tomorrow afternoon at the latest. If he sends it to me or posts it to Flickr himself, I will make sure it goes up.) J.A. Myerson has a piece at Foreign Policy in Focus which is worth reading. Pru notes "Ken Loach interview on Route Irish" (Great Britain's Socialist Worker):

Route Irish is an engrossing thriller. Why base it around private security contractors?

The rising prominence of private security companies in the news made me think that perhaps that was the story to tell.

[Scriptwriter] Paul Laverty and I have had Iraq very much in our minds since this whole illegal enterprise took off, but until now we couldn’t see a way into it as a film.

As the number of soldiers has been reduced the war has come full circle. It was fought in the interests of big corporations and now private companies are making money out of the actual occupation itself.

Have you been criticised for focusing on contractors rather than the plight of the Iraqis?

There’s no way Paul and I could make a film from an Iraqi perspective. We don’t speak the language. I wouldn’t understand nuances of behaviour.

But I hope there’s enough in the film to indicate that the suffering is primarily with the Iraqis.

At one point an Iraqi asks, “Are you only interested in solving this because it’s an Englishman? Don’t the Iraqis count?”

We were conscious from the word go that we had to give the audience clues that the Iraqis were suffering.

We use real shots of the war that show who is getting killed. And while Fergus shows remorse at the torture he witnessed, it was the Iraqis who were getting tortured.

The film makes no reference to George W Bush, Tony Blair, the anti‑war movement or the wider political picture. What was your motivation for that?

I think it was a desire to keep things implicit. We constantly get hammered because they say, “It’s too political”.

Nobody in the film makes a political speech. We hope it’s all implied: the role of private capital, the fact that profits superseded everything else in terms of behaviour.

Most of the film is set in Liverpool and there is an overall sense of the reality of war being brought back home. Was that your intention?

We wanted to show that this is something we can’t disassociate ourselves from. It happened far away but you can’t just draw the curtains and forget about it. We wanted to break the amnesia that is encouraged.

But where there is violence it appears very real. How did the actor cope with the waterboarding scene?

We had tried to do that in various ways, but the contraptions didn’t work. So he just said, “Look I’ll do it”. So we did it. It meant the scene could flow as it should do.

It was authentic, except that he wasn’t bound down so he could have sat up at any point. And sometimes we’ve used the cutting room to lengthen the time the water was being poured.

But he had a panic attack on the way home and nightmares. He’s through it now, but it was unpleasant. And the performance he gave in the middle of all that was brilliant.

Another element is the sexual politics. Don’t you think the pivotal female character, Rachel, comes across as a bit idealised?

Like a lot of people she pretends that bad things don’t happen. So she’s not idealised at all. If she were idealised she’d have been on the Stop the War march! Her ignorance is culpable.

She did all right out of it—they’ve obviously got a nice flat. She’s involved but wanting not to know the source of his income.

I think there’s also a complicated relationship with Fergus that he can only really express through violence.

What kills it is that Fergus has violence woven into his soul now and then he gets disgusted with what he’s doing and the whole thing stops there.

We talked about something more complex than we managed to show and that’s probably my fault.

The central male characters in Route Irish are basically violent mercenaries. Did you want us to empathise with them and see them as victims?

In some senses they are victims.

A lot of career soldiers join up when they’re very young from cities that have suffered economically.

In the film you see Fergus and Frankie at 16 or 17 dreaming of what they’ll do when they grow up. They do go and it kills one and destroys the other.

I think you’ve got to have some understanding for what has made these guys who they are.

Among the contractors and soldiers we met were many who were doing the job in what they saw as a good, professional way.

The character Frankie is like that and that’s what gets him into trouble. He won’t accept the random shooting that he thought was trigger-happy.

So we met all kinds of people, and the last thing we want to do is to generalise about them and turn them into villains. That’s not the story at all. The ones who are culpable are those who run the companies and see their role as to make profit out of war.

The lads on the front line may make more money than they would as soldiers, but not a huge fortune.

Did you bring in comedian John Bishop as Frankie to reach a wider audience?

No. He wasn’t well known when we cast him. Shortly afterwards he got a first gig on Live at the Apollo and everything fanned out from there.

We’re all dead chuffed for him. He’s a nice, funny guy and he’s been very supportive of the film.

Route Irish: In the wrong place at the wrong time

iraq
and the war drags on
donovan
Posted by Common Ills at 10:23 PM