Kat's Korner: The Real and The Synthetic

Kat: The state of music is pretty sorry and I was already thinking that before the news came that Amy Winehouse had been found dead. 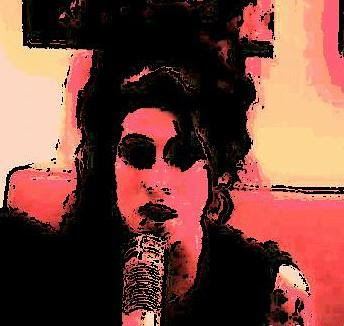 Amy Winehouse is the singer-songwriter whose best known hit will forever be linked to her life. "No, no, no" she insisted to the thought of going to "Rehab," her top ten US hit from her multi-million selling Back To Black which resulted in five Grammy Awards: Best New Artist, Album of the Year, Record of the Year, Song of the Year, Best Female Pop Vocal Performance and Best Pop Vocal Album. Topping Back To Black, which was only Amy's second album, would have been difficult if not impossible.

This year saw Amy attempt live performances again long after her drug use became more famous than her pipes. She'd mingled the two herself as a search of YouTube would easily demonstrate. including while touring to promote Back To Black, smoking crack on stage at a concert.

In June, the 27-year-old Amy performed in Belgrade and the YouTube video insists she's intoxicated. If she's drunk or stoned (I don't know that she's either), it's a testament to her talent that she still had presence. She was able to sing. She was talking to a backup singer throughout when she wasn't singing. She was booed loudly in the clip. And then she started to sing and all was forgiven (whatever happened prior to when the video started). She made it through "Back to Black" in fine form. She stops singing near the end of the song but by then the audience is singing loudly. Did she stop because she was drunk? Did she stop because she was offended by the booing and she felt she'd proved herself and wanted to waste nothing else on this crowd? Who knows? At this June 20th concert, she appears under the influence of something but even so, what stands out is what peeks through in the earlier video, a contempt for the audience. It wasn't a prestige tour and the tabloid stories that dogged her for the last years may have ensured that there were no prestige tours in the immediate future. And now we know there will be no new studio masterpiece either.


As we've waited and waited for another release from Amy Winehouse, we've had to suffer through the weak offerings of the likes of Katy Perry.

Perry is an unattractive woman with a bizarre nose who has no vocal range and little breath control. But while established radio pros like Beyonce are currently crashing and burning, failing to land a single in the top twenty, Katy Perry's riding a wave of chart hits and number ones. You have to drop back to 1988 to find someone as supremely untalented and unaware doing a Katie Perry, or rather doing a Tiffany.

Like that faded pop queen from days gone by, Katy Perry is supremely untalented. Debbie Gibson wiped the floor with Tiffany in real time and I can remember being drawn into the battle of the teen queens by a friend who wondered who had talent? I said then Debbie Gibson. I said neither woman would chart again after the 80s ended but because Debbie could (and did) write her own songs, she'd have income for years to come while Tiffany would end up posing nude in Playboy and fail to turn that fleeting attention into a comeback.


Were Dionne Warwick still running the Psychic Friends Network, I might be calling her for a job because it's 2011 and neither Tiffany nor Debbie ever managed to return to the charts. Debbie did make it onto the AC chart with fellow youth burnout Jordan Knight in 2005 and she detracted from her Broadway success by posing nude for Playboy in 2005. One wonders if Katy's currently prepping for her own photo spread?

An unattractive woman, heavily made up, lit to perfection and shot from the most flattering angles does not inspire confidence in me nor speak to confidence in herself. And I ignored her desperation bid at attention with "I Kissed A Girl" (which followed up her previous "Please, God, let me be famous" attempt with "UR So Gay"). Stealing heavily from a song that's become a baseball anthem and with a video full of manipulative shots of panty-clad female torsos and the always unattractive Katy boasting of "the taste of her cherry Chapstick," there was nothing sexual or sexy about the song and wiser minds were left to wonder if "the girl" was supposed to be 12 since she was wearing Chapstick and not liptsick? I stayed out of her pursuit of fame which may have culminated with Sesame Street's decision that, famous or not, she was too trashy to appear on the show.

A songwriter is not a singer who teams up with three or four or five songwriters to help 'write' a song. The actual term for that is "vanity credit" -- or maybe "theft."

I was around for the birth of MTV. Meaning, I've seen bad videos. I've seen ugly men think they can chase hot, young women around in videos and not leave the audience retching. I've seen the output of divas who seemed to think MTV 1982 was in need of Broadway. I've seen power ballads which still frighten me. But in all the years of videos, nothing ever prepared me for "Last Friday Night." It is truly the worst video in the world.

August 1st, MTV celebrates its 30th anniversary. When it started, some artists resisted with comments about how they wanted to communicate through the song, not a video, how they wanted people to get the message of the song. The message of "Last Friday Night" is trite and trivial so it would take a real effort to f**k it up but Katy Perry has managed to do just that and, in the process, demonstrate that she had no real participation in the writing of the song.

For those who haven't heard the song, Katy wakes up hung over and unsure of what she's done the previous Friday night. She quickly learns that the events are online and she sings of "warrants out for my arrest," of how "I smell like a minibar," "we maxed out our credit cards" and "don't know what to tell my boss." It's the perfect summer song for any young adult, capturing a weekend they may have had or may have wished they had.

Somehow, to Katy, the song demanded a video of herself in high school (looking uglier than usual -- and to be fair, she looks far better when she's supposed to be geeky than when she gets her makeover that puts her in a Yipes! Stripes! Beechnut gum outfit). Apparently her parents are out of town and teenage Katy wants to have fun but instead of opening up the song, the video only makes it all seem so much smaller. And as she meaninglessly mouths the words, you're left to marvel over how the verses have nothing to do with the video.

It's embarrassing and really hurts the actual song.

Amy Winehouse was an epic talent whereas Katy Perry is an epic fail. And when deaths like Amy's come along, you're left to wonder: Why? Elvis and others well over 35, you can say, "Hey, they had a life." But when they're younger, it's different. "Why?" is the question asked when it's Jimi Hendrix, Kurt Cobain, Cass Elliott, Janis Joplin, Jim Morrison, Minnie Riperton, Bradley Nowell, Shannon Hoon.

"Why?" is also the question asked when talents like those are taken early but when the Katy Perrys and Wayne Newtons, like illegal wars, seem to linger on?

But rest assured, Katy's day of reckoning is coming. Tiffany was sent packing. What did it for Tiffany was the realization of her young audience that Tiffany had nothing to communicate as well as the idiotic move of giving that nasal voiced pop tart the speaking role of Judy Jetsons in a Jestons movie. People do not take it lightly when you mess with a beloved cast. Did I mention Katy's got a film coming out? She's playing the voice of Smurfette in The Smurfs. History vomited up again when it pushed Katy Perry off on us, maybe it can vanish her as quickly as it did Tiffany?

Amy Winehouse leaves behind a small but glorious output. Hopefully, her live recordings -- for AOL's The DL and others -- can be collected and released. Drugs aren't the story of her art. The story of her art is the searching for the meaning and the notes while performing "Valerie" and other songs. Katy Perry is pure product and that's all she'll ever be. Amy Winehouse pursued art and, in her finest moments, set music standards. She leaves a legacy. Katy Perry will just leave a stain.