AFP reports, "Iraqi Vice President Tareq al-Hashemi and several of his bodyguards were escorted off a plane at Baghdad airport on Sunday because two of the guards were wanted on 'terrorism charges,' officials said, the latest step in a deepening political crisis." Also on the plane was Saleh al-Mutlaq, Iraq's Deputy Prime Minister whom Nouri has asked Parliament to strip the powers of. al-Mutlaq was also forced off the plane. On today's All Things Considered (NPR), Kelly McEvers offered this take:

Kelly McEvers: Here in Kuwait, just having crossed over the border, we have all these US commanders telling us that they're leaving Iraq in a better place, that it's a thriving democracy. Yet in Baghdad it looks like you have Prime Minister Maliki -- who is a Shi'ite and whose government is Shi'ite -- going after his rivals who are Sunnis. Just yesterday, charges were announced against the Vice President who is Sunni and troops surrounded his house. The Maliki government accuses him of being involved in a terrorist plot. But Maliki's detractors say this is sectarian revenge. So you know we've got these promises from US commanders that things are going really well but this kind of national reconciliation government looks like it's unraveling.

Those moves have added to a fear among the prime minister's critics that he is seeking to eliminate rivals and consolidate power.Iraqiyya warned it would pull out of the coalition government unless Mr Al Maliki agreed to seek a solution that respects "democracy and civil institutions".
"Iraq is now in a very difficult position. This is a critical time," said Eytab Al Douri, an MP with the Iraqiyya bloc. "If solutions are not found quickly, Iraq will be heading towards sectarian and ethnic divisions, and a return to civil war."

Roy Gutman, Sahar Issa and Laith Hammoudi (McClatchy Newspapers) report that there are claims of confessions being made by other Tareq al-Hashemi guards. If so, it's worth noting that Iraqi 'confessions' often result from torture making them unreliable at best. Gutman, Issa and Hammoudi note Nouri's government planned to air the 'confessions' on TV:

Iraq's Interior Ministry announced Saturday that it would televise the confessions of the first two suspects that night, but the plan touched off a firestorm. The U.S. Embassy, silent for most of the past year in the face of other political excesses, objected publicly. It said in a statement that U.S. officials had not yet seen the actual confessions and urged Iraq to investigate all allegations "in a transparent manner in accordance with Iraqi law."
On Sunday, Iraq's supreme judicial authority ruled that the confessions of the alleged "cell" members couldn't be aired until the investigation is completed.


Saleh al-Mutlaq tells Sam Dagher (Wall St. Journal) that he believes Nouri will have to back down, "It's not in the country's interest for him [Mr. Maliki] to escalate because the country could plunge into the abyss at any moment. Plus he [Mr. Maliki] came about as a result of consensus, not majority vote, and as per the will of Iran and America, and now that the Americans have withdrawn his stay in power depends on the will of the country's political blocs." 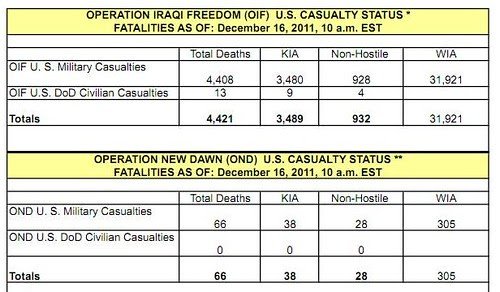 Reuters notes a Kirkuk sticky bombing left one woman injured, a Kirkuk home bombing targeting a judge left "his son and two of his neighbors" injured, 1 man was shot dead outside his home in Mosul and a Mussayab sticky bombing injured three people. Aswat al-Iraq adds, "Three Iraqi civilians have been injured in an explosive charge blast in eastern Iraq's Talibiya district on Sunday, a security source reported."

I benched Isaiah tonight. The writing for Third went on to late. Isaiah plans to do a comic before Friday. New content at Third:

Although Iraq has only 28 million people, the new U.S. embassy is the largest in the world. It is a massive compound that is one and a half square miles-—an enormous complex of 22 buildings and the size of 94 football fields. Half of the 16,000-person staff will consist of a private military army made up of mercenaries under the control of the State Department. The State Department budget for the embassy is estimated at $25-30 billion over the next five years.
In addition, the Pentagon retains a vast network of bases, sea and air power surrounding Iraq. Washington’s intention clearly is to dominate Iraq for many years to come in a colonial-type relationship. Iraq possesses the second largest oil reserves in the world.
Obama's speech was the latest in a series of appearances seeking to bolster the president’s re-election prospects by associating himself with “the end of the war in Iraq.”