Kat's Korner: All Hail The Queen of F**ked Up

Kat: Traveling the country the last four years is to realize how nothing has changed.  While a zombie clan of  'professional' adults insist all is well and good,  It's all so fake and disgusting and so reminescent of a time back in the eighties when sleepy little towns, bedroom hamlets that ringed San Franicsco and Oakland, thought they could lecture us about how to live.  That all came crashing down with Orinda and the murder of cheerleader Kirsten Costas.

Blew the lid off the faux perfection, plastic happiness and we're-all-doing-fine lie.  Fate, you see, likes nothing so much as taking a lance to the boil that is pretense.  And I'm reminded of that and the youthful angst of not belonging, whenever we speak to a high school gathering because the angst, especially this last year, far outnumbers the would be class operatives.  It even appears to be seeping into student government.

And that's why Korn's return at the end of last year with The Path of Totality was so interesting.  Alone among the big names, Jonathan Davis, James Shaffer, Reginald Arvizu and Ray Luzier appear to grasp that life is not an In Style photo shoot.


With a better sense of timing than any stand up comic, Alanis Morissette returns with her eighth album, Havoc and Bright Lights. 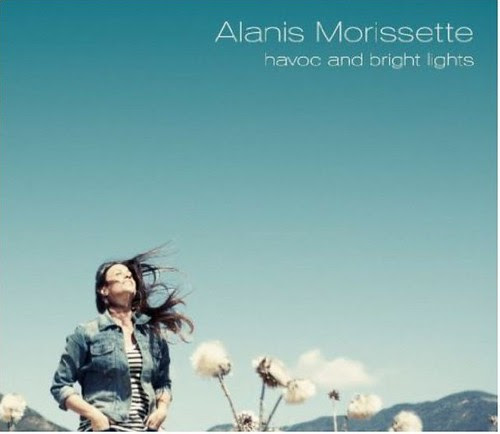 The original queen of the f**ked up, the woman who wanted the world to know she would "go down on you in a theater" after -- after -- you dumped her for another woman, the woman who name-checked and, yes, thanked disillusonment, who offered "Versions of Violence" has returned.   And as Alanis demonstrates on "Havoc," she's still more interested in what lies underneath than in the shiny surface.

"Win and Win" captures every screwed up relationship you've ever had where you've stood before a mirror telling yourself you could do it, telling yourself you were worthy but never, for one second, actually believing it.  And there's something endearing about the way she kids herself in the chorus that "we are win and win, we are equal to each other" only to quickly add "we are lost in the truth" which negates efforts to tidy up.

"Win and Win" features one of her most confident and most gorgeous vocals -- all those times messing around recording various inspid top 40 hits and posting them to her website were not wasted.

The whole album is a sonic treat.  "Numb," for example, will make you remember your huge disappointment in Alanis in 1998.  After the power and majesty of "Uninvited," few were wanting Supposed Former Infatuation Junkie (only on "Front Row" and "Are You Still Mad" did she even hint at the powers of creation and destrution "Uninvited" tapped into).  "Numb" sounds as though all she's done in the last years is explore the chasm.  It's vivid, it shimmers, it has a vocal that may actually match some amazing drum work.   At four minutes and six seconds, it's over all too soon. You want more, so much more, and it's been awhile since I've felt that way about an Alanis album.

But in the time since Jagged Little Pill and "Uninvited," it's seemed as if we got Alanis the insightful lyricist or we got Alanis the down and dirty composer.  The two had grown so estranged you kept looking around for a Yoko Ono.

On the crazy ride down that is "Spiral" ( it starts so gently and reassuring!), it appears the woman who thought she was practicing acceptance finally is.  She's embracing all of nature, not just the nice parts.  She's becoming one with the chaos.  And, as "Lens" demonstrates, she's becoming one with herself:

It's a second landmark album and most are lucky to get even one in a career.  Back in 1985 or 1986, at a club I used to go to, someone had taken a USA Today article and pasted it on a wall in the ladies' room.  It was about the Orinda murder and one part said "the quest for affluence has its price."  Someone had crossed out "affluence" and written in "arfitifical" making it "the quest for artificial has its price."  It's a price we all seem to be paying.  Alanis has returned at just the right time.