Back in 2012, an election year, the self-created celebrity Ani DiFranco goosed-stepped her way into musical fascism with an album of protests songs protesting those who . . . spoke out against the government.  The idea is so ludicrous, please remember, that it was the basis for Tim Robbin's 1982 film classic Bob Roberts.  Thirty years later, Ani recreated it with no sense of irony, humor or awareness.

She goose-stepped her way into musical fascism and irrelevancy with that album and continued the march when she announced a 'ladies' retreat' on an old fashioned plantation -- one that still celebrated slavery.  Ani was by now so out of touch with reality -- that tends to happen when a protest singer stays silent about the war, The Drone War, illegal spying and so much more -- that she couldn't understand why people wouldn't let her play White southern belle on a plantation, why they wouldn't let her celebrate her Whiteness in the face of slavery.  Didn't she have a right to get in touch with her roots too?

It was that sort of thinking that led to her first apology which was so snide and condescending that it really drove the last remaining hold outs away.  A little while later, she tried to repair the damage but it was much too late.  She and newly exposed homophobe Michelle Shocked became the face of exceptionalism and privilege and their fans fled.


Though many learned a lesson, there's no fool like an old fool.

When you're a little nothing, you tend to need an excuse for being that.

See, Buff claims -- in one press release after another -- that she's written hits for Elvis and Barbra Streisand and Neil Diamond and . . .

Because that was a hit for Barbra.

Buff's always been a bit of a liar.

She never wrote a hit song for Elvis or Barbra or really anyone except Donovan.  It took the British mystic to remove the stridency from "Universal Soldier" and give it the mourning aspect her version lacked to turn it into a hit.

Buff, in her self-penned press releases, likes to liken herself to Joni Mitchell, Neil Young and Leonard Cohen among others but her main influence has clearly forever been Ethel Merman.

Like the Merm, Buff only knows one key (screech) and one mood (overbearing).

She was one of the three writers of the song "Up Where We Belong" and if she'd tried to record it, it would have been another nightmare on the level of 1979's The Ethel Merman Disco Album.

Ethel was 71-years-old when, desperate for relevancy, she recorded that garbage.  Buff's three years older than Ethel was as she releases her latest album, the ridiculous Power In The Blood. 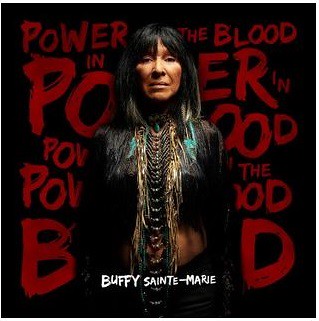 It's as ridiculous as Buffy's leather ensemble and purple streaks in her hair.

It's as ridiculous, in fact, as Buffy Sainte-Marie.

She creaks and groans through a useless album that is quick to feature re-recordings of decade old songs because (a) she has nothing left to say and (b) she's not going to address The Drone War, the illegal spying, the ongoing war in Iraq, counter-insurgency, you name it.

I'm not an LBJ fan or an apologist.

But as Buffy and her eager to please idiots pimp her -- Amy Goodman just last week -- she re-tells her "LBJ banned me from the airwaves" nonsense.

In many interviews, Buffy used to claim she knew about it because she got her FBI files.

Okay then, release them Buffy.  Prove your damn claim.

Because she has no evidence that LBJ did a damn thing to her.

Her voice was questionable at best -- the years have only made it crack even more on the latest album -- and her inclination to screech didn't make for effective radio.

Protest singers like Phil Ochs and Joan Baez had to fight for radio airplay and they were giants in the field.  Little Buffy? She had an audience in Greenwich that didn't translate nationally.

Not that she wasn't given opportunities.

Appearances on The Tonight Show with Johnny Carson and American Bandstand did not lead any of her songs to climb the charts.

She was also a really bad copycat.  So when the most famous protest singer of all, Bob Dylan, went country   with John Wesley Harding, Buffy could be found the next year in Nashville recording her I'm Gonna Be A Country Girl Again.  She'd take the title track all the way to number 98 on the charts amidst a flurry of media attention about the Native American gal singing country.

All the way to number 98 -- such passed for 'hits' in Buffy's limited success.

Buffy's convinced she was brought down on radio -- this despite the fact that throughout the sixties she never broke the top 40 -- hell, she didn't even break the top 90.  This despite that fact that her 'highest charting' album hit number 97 and no higher.

How was Buffy a threat to anyone?

When she and Amy Goodman are making nice, Buffy doesn't tell the story she's long told.

You know the one, don't you?

About how she's an artist unlike, sniffs her nose in disdain, Judy Collins and Joan Baez.

She had important statements to make about who we were as individuals, she'd insist.

Before adding that that's why you never saw her participating in Civil Rights actions or protesting the war in Vietnam.

A fake-ass 'Native American' when she wants to be who spent the entire 60s avoiding political action and involvement.

If you doubt it, click here for Buffy sharing this month with CBC how unimportant the Civil Rights Movement and the protests against the Vietnam war were. The most important thing, she explains soaking in a pool of her own narcissism, was that she be herself.

Buffy's career was destroyed by LBJ, she repeatedly insists while never offering any actual proof of actions LBJ took or, for that matter, that she had a career -- thriving or otherwise.

Laura Nyro's voice was too unique to make the top 40 apparently.  Her flights in her upper range turned some people off.  But the songs she wrote would be recorded by others and become monster hits.  The bulk of The 5th Dimension's radio output, for example, would be Laura's writing -- "Stone Soul Picnic," "Blowing Away," "Save The Country," "Sweet Blindness" and the number one hit "Wedding Bell Blues."  Three Dog Night has a huge hit with Laura's "Eli's Coming."  Blood, Sweat and Tears scored with "And When I Die."  And, again, "Stoney End" which gave Barbra her first top ten single in seven years.

And, please note, Laura did all that and more against the backdrop of the Civil Rights Movement and the war and never shied -- in interviews, at concerts -- from explaining exactly where she stood -- for equality and for peace.

Did LBJ keep Laura off the airwaves?

But, unlike Buffy, she still managed to be a huge influence on college campuses and to release albums that actually sold.  And there is no 'striving towards art' on Laura first five albums, there is only art.

Which is how she came to tell the tale in the early 60s -- now forgotten? -- about how a doctor gave her pills and, in another city, a pharmacist explained these were addictive and wouldn't refill the prescription.  That's a simple enough tale unless your the Buff.  This tale, as she told and re-told it, became much more sinister.  The doctor, you understand, was trying to get her hooked.

And then the doctor got others hooked.

And then, as she continued to tell the tale over the years, the doctor gave these pills to young women because he was turning them into hookers who worked for him.  He'd put them out on the street!

This fanciful tale, which grew and grew with each re-telling, was her big victimization story for years and years until she landed upon Buffy Attacked By Sitting President LBJ.

Again, maybe she was.

She could provide the alleged FBI papers and clear the whole matter up.

You need to ask yourself why that is?

And listening to her ridiculous croaking and screeching on the musical disaster that is Power In The Blood, you need to ask yourself why she bothered to release this mess?

Has she lost her hearing on top of everything else?