Kat's Korner: Faux feminist Judy Collins plays Where The Boys Are yet again

Kat: If you're not getting how awful STRANGERS AGAIN is early on, you should by track five. 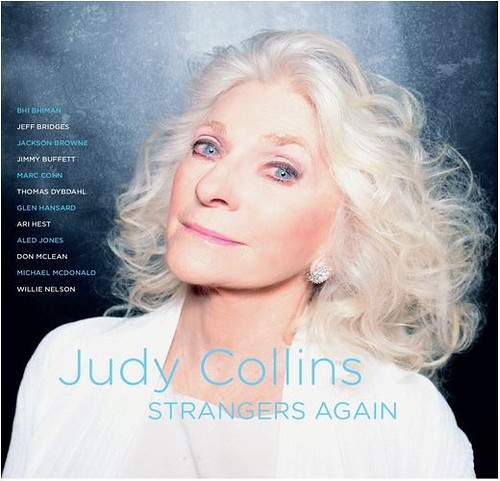 That's when Jeff Bridges drops in to duet on "Make Our Garden Grow."

It's not that Jeff can't sing, it's that why should he?

The actor is among 12 duet partners joining Judy Collins for another album that proves, not only is her voice shot, but also that she's one of the all time great fake asses in music history.

Nearly a year after the Queen of Soul Aretha Franklin released her classic ARETHA FRANKLIN SINGS THE GREAT DIVA CLASSICS, the 76-year-old Collins is still embarrassing herself and refusing to honor her female peers.


Or women at all when she includes a duet with Jackson Browne -- or are we all still pretending that the man Joni Mitchell wrote "Not To Blame" about:

. . . the man who police flooded into his home when he was beating Daryl Hannah is a 'good guy' because of his left politics?


Oh, Jackson, three years after Joni's song was released, had an 'answer' -- Joni was "bitter," he insisted, and she had been "violent" with him twice during their early 70s affair.


That's an answer in what f**ked up world?

Those allegations respond to the police call when he was beating Daryl Hannah how?

But Judy Collins -- alleged feminist -- wants to record with Jackson Browne whose history of abuse of women pre-dates the assault on Hannah.  (Maybe she's doing it to support gay rights because, though Jackson's loathe to admit it, the whole world has heard the pay for play rumors of party boy Jackson in his early days when his weak and meager voice couldn't interest record labels.)


Feminist Judy has decided to release another bad album of her increasingly thin warbling -- often off-key -- and disgraced herself yet again.


She'll be on NPR'S THE DIANE REHM SHOW tomorrow talking about her long career.

No doubt, Diane will allow Judy to present as a feminist.

She won't note that Judy's recorded 'tribute' albums to various men (Bob Dylan, Leonard Cohen, Lennon & McCartney)  and Diane will never point out that Judy's never recorded an album of Joni's songs (Joni gave her the only real hit of her career, "Both Sides Now"), or an album of Carly Simon's songs, or Janis Ian, or Joan Armatrading or Tracy Chapman or Laura Nyro or Kate Bush or Tori Amos or Roberta Flack or PJ Harvey or Melanie or Dolly Parton or Aretha Franklin or Rickie Lee Jones or Sandy Denny or Nanci Griffith or Sade or Cat Power or Alicia Keys or Fiona Apple or Aimee Mann or Stevie Nicks or Brenda Russell or Erykah Badu or Jewel or Mary J. Blige or Maria McKee or Shawn Colvin or Joss Stone or Dar Williams or Jill Scott or Martha Wainwright or Chrissie Hynde or . . .


You can probably think of 50 of your favorites I didn't even mention.


But I think you get the point.


There are more than enough female songwriters for 'feminist' Judy to pay tribute to with an album of just their work.  But she can't even do what Aretha did -- devote an album to women and their musical accomplishments.


See, it's not just that she refuses (out of her bitterness) to do a full album of Joni Mitchell songs, it's also that she refuses to do an album saluting a group of female singer-songwriters.

Equally true, of the women I listed, only Sandy Denny and Laura Nyro couldn't have sang a duet on her new album (both women are dead).

But Judy didn't want to sing with women, did she?

In the last few decades -- especially when she couldn't land a recording contract, Judith was more than happy to sing back up for Carly Simon ("The Fisherman Song" from HAVE YOU SEEN ME LATELY?) or Dolly Parton ("Both Sides Now" from THOSE WERE THE DAYS).

But Judy's destroyed her own career.

Not just by continuing to record in keys her voice will never again reach but also by repeatedly appealing to Girl Power and claiming to be a feminist when it's time to sell her latest product despite the fact that her product is conservative, traditional and anti-women.

This is the woman, please remember, who recorded Dylan's sexist "Sweetheart Like You" ("a woman like you, should be at home, that's where you belong . . .").

This is the elderly bitch -- and, yes, I'm using that word and be glad I'm not using another term -- who has repeatedly failed women while attempting to use feminism as a marketing strategy.

She needs to lower the keys she's attempting to sing in these days, yes.

But she also needs to grasp that she's destroyed her own career.


"Trapped in an AA meeting with Judy Collins (Ava and C.I.)" decoded it quite clearly as Ava and C.I.  noted how Judy re-wrote reality (and her 1987 autobiography) in 2011 with SWEET JUDY BLUE EYES:

Instead, Judy Collins has written another book insisting she is highly desirable. Or was. Probably insisting how desirable she was. We say that because her eyes are still blue yet she chooses a photo from the mid-seventies for her book cover. (The photo on the back cover is from the late 60s.) In between the two photos of the woman in her thirties, the 72-year-old author goes on and on about her past affairs. Yet again. Stephen Stills (who wrote "Suite Judy Blue Eyes" about her) pops up as do many other familiar characters. And as you read (again) of the never ending parade of men, you start to wonder if Judy wants to be seen not as a singer but as a modern day courtesan?

"We got along well and continued to have a great sex life, enlivened by reading The Story of O," she shares of Michael Thomas on page 195, having just shared -- in this chronological biography -- on 191 about "dating Dick Lukins" and "a brief romance" with David Levine. To be clear, our criticism is not about shock or scandal. We're not appalled that Judy's had bed partners (and we know several that didn't make the latest book). We're just amazed that she's written yet another book where everything gets tossed onto the floorboard of the back seat to let whatever guy she's sleeping with ride shotgun.

Women pop up from time to time. Unlike Joan Baez, Judy's not confessing to any same-sex affairs. But women come up frequently in the book as she attempts to settle scores. Mimi Farina has been dead for a decade, her husband Richard for over four decades. "I ADORED Dick Farina," Judy writes. "Mimi later said she thought that was something else going on with us us . . . But she was wrong." (FYI, it's author Judy that puts "ADORED" in all caps.) Other than "bitchy," we're having a hard time figuring out what makes Judy still try to pretend she was closer to Richard than Mimi or to paint Mimi as jealous of her?

Mimi's sister Joan Baez is a bigger target but Judy appears even more immature when writing 'about' that rival. Throughout the book she takes aim at Joan -- while insisting she was always the better person (for example, Joan mocked Judy's lisp but Judy insists that she laughed at Joan's imitation). But the one-sided feud really grates when, for four paragraphs, Judy wants to set the record straight that Bob Dylan wrote "I'll Keep It With Mine" for her and not for Joan, telling readers of arguments and lawyers and Joan insisting that it was written for her and refusing to record it after Judy had already done so. All this for a very insignificant song in which the subject (whether "you" is Joan, Judy or someone else) is never as important to the narrator as his own self-glorification (only he can save the "you").

Carole King is fobbed off twice, the most telling moment when she appears for no reason as "the power of the song-selling machine that throbbed behind Carole King's music and that of other writers in the Brill Building stable." If you didn't catch that "machine" isn't a compliment in the Collins' canon, she's explaining that real artists "including Leonard [Cohen], Joni Mitchell, and others, would try to build a following for their songs by singing them in clubs" but couldn't compete with the "machine."

Ah, yes, Joni. Carly Simon's written of in such a way that you might think she was an actress. In other words, Carly pops up in a sentence here and a sentence there and only in one paragraph where Judy mainly notes Carly's stage fright and that she had once performed in a duo with her sister Lucy as The Simon Sisters. We mentioned Judy was on Elektra. Who was the label's best selling female artist? Carly Simon. And Carly is the only singer-songwriter of her peer group -- male or female -- who can boast of having won a Golden Globe, Academy Award and Grammy for song writing. Don't expect any of that to make it into Judy's book because if Judy couldn't even the score a little by obscuring all of that, what would be the point in writing her fourth autobiography? Other contemporaries (rivals, apparently) such as Janis Ian, Buffy Sainte-Marie, Judy Henske and countless others are reduced to unidentified names in single sentences. But with Joni, Judy's hunting bear.

It's as if the damage Judy did to Joni with her recent cover of Joni's "Cactus Tree" -- featuring Judy's teeth grinding notes on "busy" ("while she was busy being free") -- wasn't enough. No, she wants to dish in that passive-aggressive way that's become a Judy Collins hallmark. And that brings up an interesting point. How the hell did she never deal with her passive-aggressive nature? It's as puzzling as her two decades as an alcoholic in denial while in therapy. (Not mentioned in this book, a lover once accused her of being addicted to therapy.) What were all those sessions for?

Apparently to talk about herself and how wronged she was. More than any other woman, Joni registers in Judy's latest tome. Pages 215 through 219 primarily deal with Joni (who gets many single sentences mentions elsewhere in the book and another minor section later on). Though it's less space than she devotes to longtime rival Joan, it's much more telling.

As Judy remembers it, she brought Joni and singer-songwriter Leonard Cohen together for their "love affair" shortly after she (Judy) woke up "in bed with a man I did not know who was coming down from an acid trip and wanted me to 'comfort him,' no sex was involved. Leonard sat in the room with us, singing 'The Stranger Song' softly to himself . ." What any of that has to do with Joni is only a question if you didn't realize that Judy never landed Leonard and, if she's about to acknowledge his affair with Joni, she first wants us to know, again, what a hot little number she once was.

The point of this latest hideous album, STRANGERS AGAIN, is to try to convince the world that, at 76, she's still a hot little number.

She's not an artist.

And she's not a feminist.

Feminists don't salute songs (or songwriters) that insist women belong "at home" nor do they record songs with men who physically attack women.


Judy Collins is a joke, a dirty old joke, and the sad truth is that she made herself that.


Buy STRANGERS AGAIN only to laugh at her failed attempts to sing (screech) in keys she no longer can reach while she again makes clear that feminism, to her, is nothing but a marketing strategy.