Tuesday, December 27, 2016.  Chaos and violence continue, an Iraqi reporter is kidnapped from her home, and much more.


In the allegedly US 'liberated' Iraq, another journalist has been kidnapped in Baghdad.  Gunmen representing as security forces kidnapped Iraqi journalist Afra Shawq al-Qasi..

AP explains, "Unidentified gunmen broke into the house of a female journalist and activist in Baghdad late Monday night and kidnapped her, Iraq’s Interior Ministry said on Tuesday, a reminder of the dangers journalists face in a country where authorities have struggled to maintain security nationwide."  BBC NEWS notes:


On Monday, Ms Qaisi wrote an article in which she expressed anger that armed groups could act with impunity.
The article, published by the Aklaam website, criticised an interior ministry officer who she said had assaulted the principal of a school in the southern city of Nasiriya for refusing to punish a pupil who had quarrelled with his daughter.
"There is nothing worse in a country than humiliating a teacher; nothing is worse than neglect by those who carry weapons," Ms Qaisi wrote. "If the state is anxious to preserve its prestige, it should hold accountable whoever uses weapons illicitly."

AFP quotes the head of Iraq's Journalistic Freedoms Observatory, Ziad al-Ajili stating, "Eight armed men burst into her house in Saidiya dressed in plain clothes and entered by pretending to belong to the security forces. They tied up her son and stole mobile phones, computers and cash before kidnapping Afrah and fleeing."

1001 Iraqi Thoughts ‏@IraqiThoughts  5h5 hours ago
Freedom of press is vital for our nascent democracy. We mourn the loss of Iraqi journalists this year. 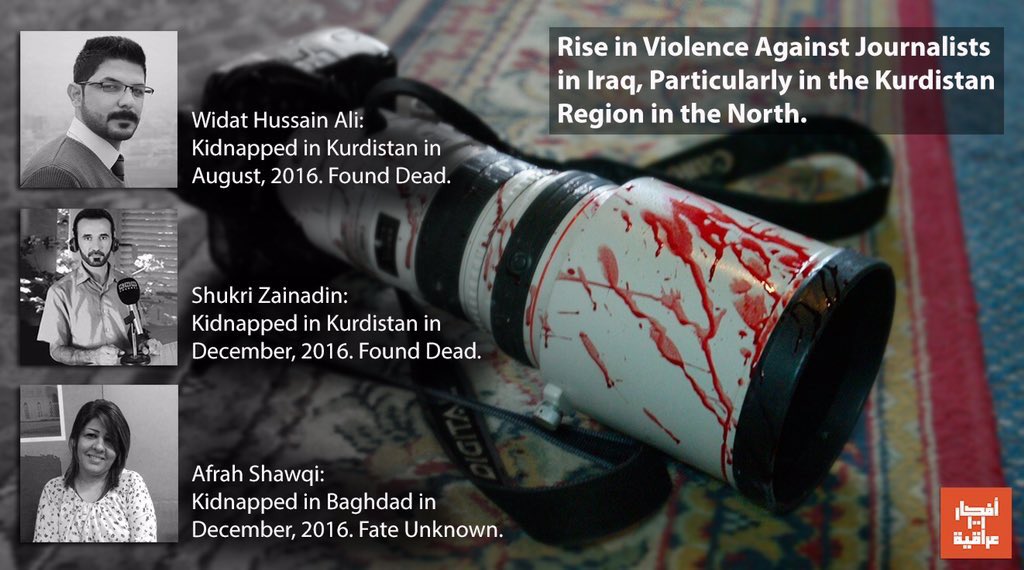 
Moving to an update, in Monday's snapshot, we noted:

Reporters Without Borders notes at the top of their webiste:

Here, we call it 75 journalists.

A total of 74 journalists were murdered or killed in connection with their work in 2016, compared with 101 last year.  This significant fall is due in part to the fact that more and more journalists are fleeing countries that have become too dangerous: not only Syria, Iraq, and Libya, but also Yemen, Afghanistan, Bangladesh and Burundi, which have now also become, to varying degrees, news and information black holes where impunity reigns.


Actually, Iraq was a lot more deadly.  And it's new numbers put it behind Syria and ahead of Afghanistan making it the second most deadly country for journalists.


As many as 13 Iraqi journalists were killed and 179 others were attacked across Iraq during 2016, a rights group has revealed in a new report. Most of those killed lost their lives at the hands of [the Islamic State] militants while covering the war in the country, said the Iraqi Journalists’ Rights’ Defence Association.
Apart from physical violence, many journalists have also been threatened by persons unknown for publishing stories about corruption in state institutions. “There is a lack of interest shown by Iraq’s security services in following up such threats and initiating formal investigations,” the report noted.

State institutions are deliberately obscuring and withholding information from various media outlets, it explained. They tend to deal negatively with journalists and correspondents for satellite TV channels.


Grasp that: In Iraq, Iraqi journalists are threatened for reporting on corruption.

For context, in the US pundits are whining about Donald Trump and his threat to the press.

Name one expose the press published during the eight years Barack Obama has been president.

Don't count whistle-blower Ed Snowden's revelations because the US press went out of their way to attack Ed and to down play what was exposed.

They've gone out of their way not to rock Barack's boat.

They've repeatedly failed to do their job.

And now they whine about Donald Trump.

But Iraqi reporters risk real danger and still they report.

And maybe for a minute or two, the western press notes that before quickly forgetting.

Dropping back to the September 8, 2011 snapshot:


In Iraq, a journalist has been murdered.  In addition to being a journalist, he was also a leader of change and part of the movement to create an Iraq that was responsive to Iraqis.
Al Mada reports Iraqi journalist Hadi al-Mahdi is dead according to an Interior Ministry source who says police discovered him murdered in his Baghdad home.  Along with being a journalist, Al Mada notes he was one of the chief organizers of the demonstrations demanding change and service reform that began on February 25th -- the day he was arrested by Iraqi security forces and beaten in broad daylight as he and others, after the February 25th protest, were eating in a restaurant. The New York Times didn't want to tell you about, the Washington Post did.  And now the man is dead. Gee, which paper has the archives that matter to any real degree.  Maybe it's time to act like a newspaper and not a "news magazine" with pithy little human interest stories?  (That is not a dig at Tim Arango but at the paper's diva male 'reporter' who went on NPR to talk of an Iraqi college this week.)  So while the Times missed the story (actaully, they misled on the story -- cowtowing to Nouri as usual),  Stephanie McCrummen (Washington Post) reported:

Four journalists who had been released described being rounded up well after they had left a protest at Baghdad's Tahrir Square. They said they were handcuffed, blindfolded, beaten and threatened with execution by soldiers from an army intelligence unit.
"It was like they were dealing with a bunch of al-Qaeda operatives, not a group of journalists," said Hussam al-Ssairi, a journalist and poet, who was among a group and described seeing hundreds of protesters in black hoods at the detention facility. "Yesterday was like a test, like a picture of the new democracy in Iraq."

Let's pull from the February 28, 2011 snapshot:
Over the weekend, a number of journalists were detained during and after their coverage of the mass demonstrations that took place in central Baghdad's al-Tahrir Square. Simone Vecchiator (International Press Institute) notes:


Hadi had a dream that Iraq could become what so many in the US press portrayed it as being, a democracy, a place of fairness, a government that provided for the people.  The youth activists will carry on the struggle, as will be evident tomorrow, but it says a great deal about the state of Iraq, he real state of Iraq, that Hadi can be targeted and murdered for wanting what so many US gas bags and US politicians and liars wnat to insist Iraq already has and is.


Hadi's assassination should have resulted in universal condemnation.

We never quoted the White House or the State Dept on Hadi's assassination -- because they never had a statement.

Yes, Hillary Clinton was Secretary of State then but Barack was also president.

Neither cared enough to make a statement.

Neither cared enough to press the issue.

They wanted Nouri al-Maliki in charge of Iraq.

And they didn't want to create any trouble for the thug.

And the thugs who carried out the attack on Hadi remain free.

Possibly, they were part of the kidnapping last night?

It's not the Islamic State.

You know Barack and John Kerry wish it were.

It's a Shi'ite militia.

One of many given free reign in Baghdad.

And, most likely, no one will be charged.

The international community will fall silent as Alyssa Aleppo Milano does ever more cheerleading for a war on Syria and passes off her work for empire as peace.

But as the continued targeting (and killing) of reporters in Iraq for doing their job -- in fact, these aren't just "killings," these are assassinations.  And these continued assassinations will be ignored by all the tools of empire like Alyssa Aleppo Milano.