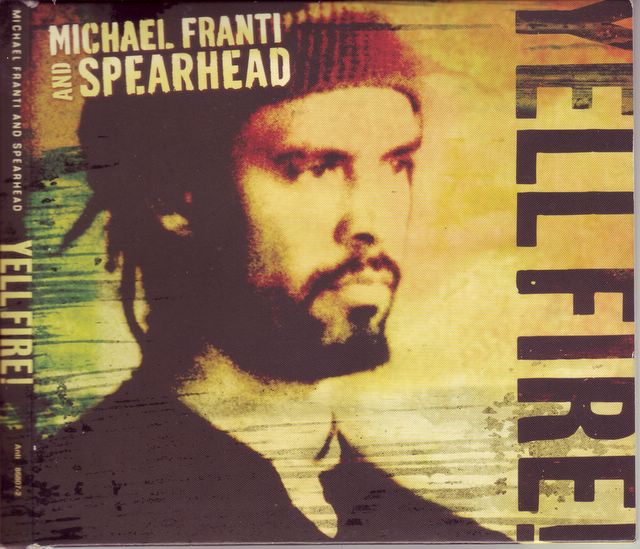 Kat: People say today is nothing like the sixties. They say Iraq is nothing like Vietnam. They say "kids today" have none of the activism that they did -- as though what you did decades ago is reason to congratulate yourself for sitting on your ass today. There are differences between then and now. They just don't usually get pointed out.

For instance, on the Mamas & the Papas 1967 classic album Deliver, they cover the Rogers & Hart classic "Sing For Your Supper." It was different then. You could listen to that and picture a nation still on strong economic footing where "songbirds always eat." Today?

That's from "What I've Seen" off Michael Franti & Spearhead's new CD Yell Fire! and, yes, there is difference between then and now as the song (written by Franti and J Bowman) clearly outlines. In the "sixties," a nation on stronger economic footing wasted billions and billions on a phoney war. Today, we have a nation that continues to waste billions and billions on a phoney war but the country's economic footing is far less sure. How bad it is? We could talk outsourcing, we could talk wage stagnation, we could talk the disappearing housing bubble, the continued erosion of manufacturing . . . We could hit any of those topics but today, this sunny headline from AOL probably sums up the reality of the country's economic state (don't call it "economic health" -- "economic sickness," yes): "Amazing Jobs Across America" blares the headline meant to fill you with a sense of optimism and hope on this Labor Day. Want that delusion? Avoid the subheading: "From Bingo Callers to Sign Designers, We Labor in Many Ways."

Yes, it's true. Study hard enough, rake up that college debt and you, too, can dream of one day becoming a Bingo Caller!

Yell Fire! is a truth telling album. Though that will probably be enough for many, for those worrying that somehow means Yell Fire! doesn't rock, rest assured, it rocks. It rolls. It jazzes. It raps. It reggaes. It folks. And it funks.

On a ballad like "Sweet Little Lies," the apolitical can sway along and sing, "You tell me lies, lies, lies/ Sweet little lies/ When I cannot bear the truth/ You tell me lies, lies, lies/ Sweet little lies/ Help me make them all come true." You can sway (or flat out dance), you can kiss the one you came with (or a stranger if that's your wont), you can make out to the song. And when Franti sings, among other sweet little lies he needs to hear, "Tell me that somebody stopped the war" -- it can just sail right over your pretty, little head that's remained impervious to the world around you.

For the ones awake in the real world, the album will speak to you directly to you. If you've wondered where are the artists doing their job (reflecting the world around them), Yell Fire! is the disc you've been waiting for.

Yes, you can dance to it. Yes, you should dance to it. And yes, it's a song you should hear blasting from car speakers and cell phones, at concerts, pool halls, bars and peace rallies. Maybe you will? Maybe the waking nation is ready to stand?

In case we, again, hit the snooze button, get a copy of Yell Fire! It's the strongest thing Michael Franti (with or without Spearhead) has done yet and that's saying a great deal. In case you're new to Franti & Spearhead, let me put it into perspective -- this is one of the best CDs of 2006.
Vying for the title of "the best" on my own list right now are Yell Fire!, Ben Harper's Both Sides of the Gun, and Neil Young's Living With War. 2005 had many good albums. But 2006, with three months left, has already shaped up to be a stronger musically. Yell Fire! is one of the discs musically raising the ante.

And that's another real difference. There are three stand out album vying for the spot of best of the year by my ranking. In the "sixties," there would have been twenty. But we're up against sameness and conformity (like we haven't seen since the '50s) as well as a media system that reduces our access of information in all its forms (including music). That three have managed to triumph over the system is amazing. Show your support for real music, for art that reflects the world we live in, by listening to Michael Franti & Spearhead's Yell Fire! Yell Fire? Yell "Real music!" Yell "Art!"