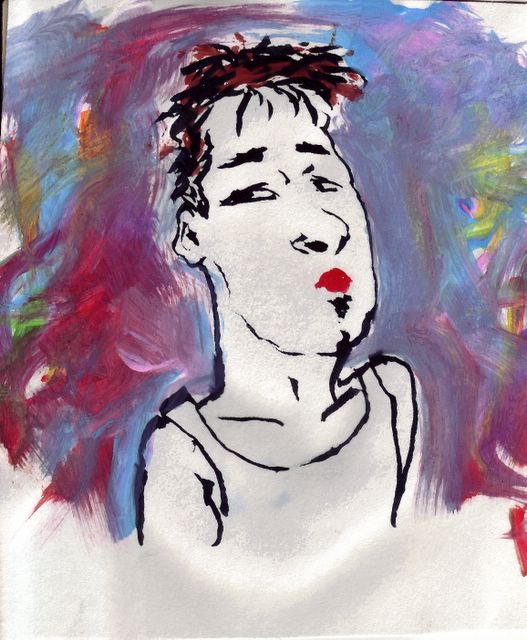 Kyle Snyder, 23, of Colorado Springs, Colo., was supposed to travel to Fort Leonard Wood, Mo., by bus from Louisville, but didn't go.
Snyder told The Associated Press that he went AWOL Tuesday after being dropped off at the Greyhound Bus station in downtown Louisville.
That came just hours after the military told him he would return to his unit rather than face a quick discharge.
"I realized this deal was going to go bad," Snyder said last night.

The above is from our brave independent media in the form of the Associated Press. That's right, AP. It's Brett Barrouquere's "AWOL soldier flees military once again" and why is it AP bringing you the news and not KPFA, for instance, which thirty or so years ago would have been all over this story? Because independent media can't be bothered with the story of war resisters today.

We didn't hear about Kyle Snyder on anything on KPFA yesterday, not Flashpoints, not The Morning Show, not Flashpoints. The only show that aired on KPFA and addressed Snyder was Democracy Now! which doesn't originate with KPFA, they only air it. Democracy Now!, as Elaine noted, dismissed Snyder's story with a headline. Though footage of him speaking in August was readily available, they didn't even play it.

It was time for the 'sexy' issue of ballot measures yesterday with a man whose judgement was as questionable as his speaking. Or should I, in honor of the 'expert,' type, "as questionable as uh, his uh, speaking, uh"?

'Values voters' weren't all that? Thanks for informing us. This community dispensed with that nonsense in November of 2004. It was also interesting to watch him reduce Republicans to two camps when they are a bit more complex than that. But it was a nice rah-rah for libertarians which really aren't Republicans, but whatever. His 'analysis' of South Dakota was laughable and it appeared he knew nothing about the battle that had gone on there. If, for instance, you were hoping to hear about Native American involvement, forget it. He wasn't interested. It was a White-White-White world of gas baggery. It was gas baggery at it's finest.

But Goodman and company can take comfort in the fact that, for less than a minute, they noted Kyle Snyder. The same can't be said for the rest.

The link-fest sites? They didn't have time for Kyle Snyder on Tuesday, why the hell would you think they'd spare a link to him on Wednesday?

KPFA has elections this month. So far forty-seven community members have asked in e-mails if there's anyone I would recommend? I thought it would be a breeze but no one's asking for a program on Iraq. I see a lot of easy statements. I see the nonsense that Democracy Now! needs to air in the evening as well. Who is supposed to be giving over time, which KPFA produced show is supposed to, so that an hour can be freed for that? And what's the point of removing original KPFA programming so that a show that will have aired that morning on KPFA can now be broadcast, same episode, at night?

I'm hearing gas baggery from the candidates. I'm not hearing bravery. (I also find the nonsense with the ballots and how you have to use the original envelope it was mailed in and only that envelope for your vote to count to be nonsense.)

I actually thought I knew who I would be voting for, but then I read the statement about how an hour of evening time would be taken up to air Democracy Now! and that lost my vote. Apex Express will lose an hour? Flashpoints will be moved to when? The KPFA Evening News will be no more? Where do they think this hour of evening time is coming from because, last time I checked, KPFA didn't have dead air. I read that statement and about how the show was a proven winner in fundraisers and thought, "So ___ what?"

If that's the basis, by all means, take everything off and just repeat that one show all damn day. Or, better yet, do your work and you'll find that Bonnie Faulkner's audience has been working their ass off to contribute to KPFA. Others have as well, but the fundraising success this cycle is Bonnie Faulkner (and the others behind Guns & Butter). If you don't even know that, it may not be surprising that you're unaware that KPFA doesn't have an hour in the evening to give up.

But anyone could have my vote just by noting the shameful fact that three years into this illegal war, there is still not a program on KPFA that's focus is the war. That candidates want to convince you they are fit for the job but no one has proposed the obvious -- that independent, community radio needs to be increasing the coverage of the war -- doesn't make me feel engaged in the voting process.

Kyle Snyder has been reduced to a footnote when covered at all. When someone wanting my vote can address that, I may be inclined to vote but, as it stands now, I'm seeing a lot of people trying to build on the memories of 1999 and not much else.

Kyle Snyder matters. War resisters within the military matter, the peace movement matters. They just don't get the coverage they deserve. And since the four year mark will hit in March, there's really no excuse for what's passing as coverage.

Kyle Snyder self-checked out of the military in April 2005. He checked out again last night. If KPFA's wondering why they (and others, it's not just KPFA) have lost some listeners, they might want to take a serious look at whether some of the lifestyle crap airing lately is supposed to bring in listeners. I'm not talking arts coverage, KPFA has a long history of addressing the arts. I'm talking lifestyle pieces and any listener to KPFA knows just what I mean. This week, thirty minutes to tell us smoking is bad for you. Thank you, call it breaking news!

We couldn't get Kyle Snyder, but we could get a half hour telling you what everyone knows and has known for decades. We could get the audio equivalent of the little warning on each cigarette pack. That's lifestyle, that's not news. And it's not even 'brave' lifestyle features because you can get that same crap passing for 'news' on Today, Good Morning America, go down the list.

Kyle Snyder is news. And there was a time when KPFA would have been all over his story. The fact that they aren't, and that no candidate wants to address that, doesn't bode well for the upcoming election.

kyle snyder
Posted by Common Ills at 4:00 AM