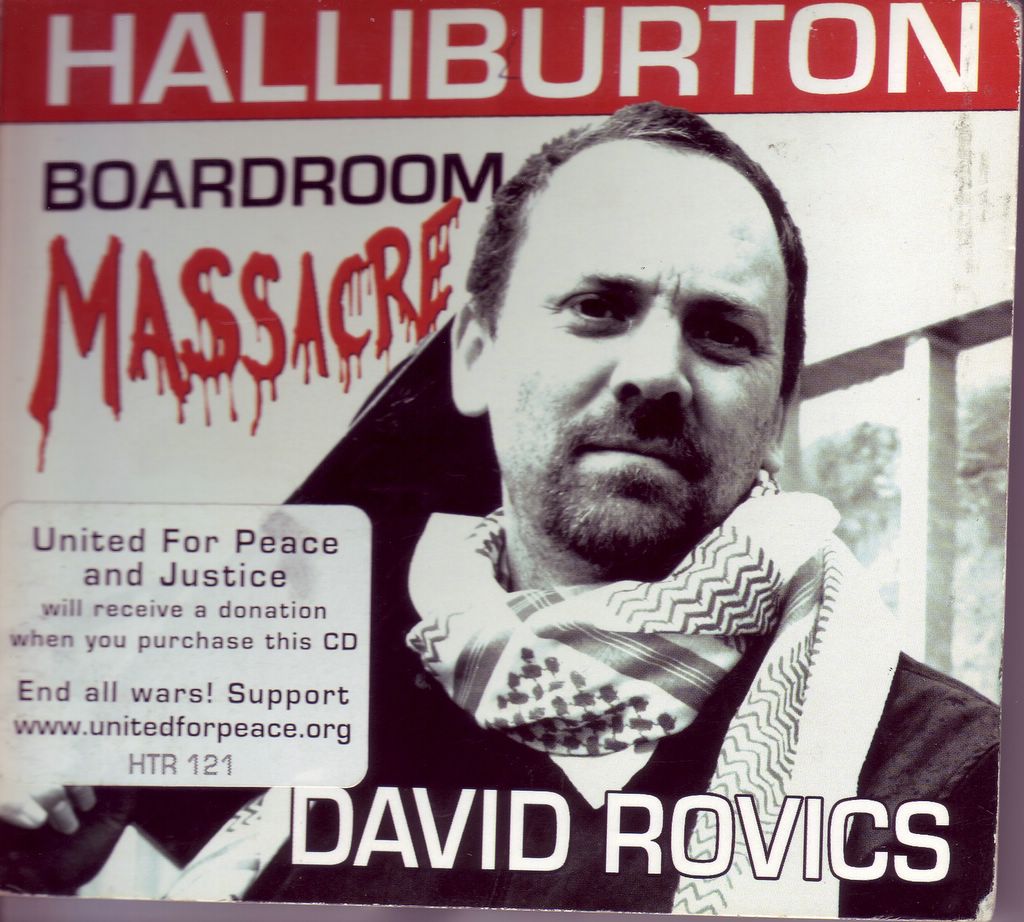 Kat: So opens David Rovics' latest CD. The song is "Crashing Down." The album?

Well the title is Halliburton Boardroom Massacre but the album itself is the answer to a question and a question in and of itself.

The answer is "Here." The question answered is, "Where are the artists today commenting on the world around them?" Plays are weighing in left and right and have been for several years now. Music's lagged behind. The bravery that the success of Green Day's American Idiot should have prompted seemed to take two years to emerge. When it did this year, it was with strong albums such as Ben Harper's Both Sides of the Gun, Neil Young's Living With War, Ani DiFranco's Reprieve, Michael Franti & Spearhead's Yell Fire!, and a select few others. Add David Rovics' Halliburton Boardroom Masscre to the select list of art that addresses the world today ("just nuts," to steal from Isaiah).

The front of my CD displays a sticker which reads: "United For Peace and Justice will receive a donation when you purchase this CD. End all wars! Support www.unitedforpeace.org." The back cover shows Rovics apparently getting someone in the sight of his guitar and written on his guitar is "THIS MACHINE KILLS CEOs." The song titles include "How far is it from here to Nuremberg," "Paul Wolfowitz" and more.

So my fear is that people will see it and think, "Oh, I'm not in the mood for something that heavy."

See, that's the question the album asks: Who is going to popularize these songs?

It's really easy for people to cite this song or that song by Bob Dylan and forget how easily Dylan might have been overlooked if Joan Baez, Peter, Paul & Mary and others hadn't popularized the songs. For the diehards who think Dylan crawled on water before he learned to walk, there are a lot of amazing songwriters that you probably know, probably listen to, and wonder why more people don't grasp their geniuses?

Usually, the reason is most people haven't heard them.

But when you make a list of all the artists that have recorded Dylan over the years, or just during the years when he was making a cultural impact, you're left with a long, long list that, besides Baez and P, P & M, also includes the Byrds, Cher (Cher fans of the sixties heard a lot of Dylan on her solo albums -- she even beat the Byrds on the charts when they both covered Dylan's "All I Really Want To Do"), and so many more.

If you don't think that matters, think again. Nina Simone covering Dylan (and she did) brings in an audience who might know the song already, or not, but they are going to be humming and singing it after they hear her version. Same with the Byrds, Cher, Baez, Fairport Convention, the Hollies, Jose Feliciano, the Box Tops, Odetta, Richie Havens, Rick Nelson, Them, Johnny Winter, the Band, Judy Collins, Bobby Darin, Johnny Cash, Janis Joplin & Big Brother and the Holding Company, Waylon Jennings, Nancy Sinatra, Young Rascals, Barry McGuire, Sam Cooke, Bobby Bare, Elvis Presley, Melanie, Joe Cocker, Stevie Wonder . . . That's not a complete list but all of the artists recorded Dylan before 1970.

Listening to "Song for Cindy Sheehan," I could imagine how Joan Baez would cover it. "Waiting for the Fall" made me imagine the shadings Etta James could bring to it. Bruce Springsteen could put his own stamp on "When Johnny came marching home."

None of that is to sugget that David Rovics can't sing. He can. His voice has a tone that's very appealing. But he's written an amazing collection of songs and the reality (as opposed to the myth) is that the songwriters (solo or teams) that we know are generally popularized. Laura Nyro, whose music I love and listen to, never hit the top forty. The Fifth Dimension, Blood, Sweat & Tears, Three Dog Night and Barbra Streisand road the charts with her songs. Ashford & Simpson have written amazing songs but even people who've never heard them perform their own songs know a version by Diana Ross or Marvin Gaye.

With Halliburton Boardroom Masscre, Rovics has created an amazing album. But I wonder how many will hear it? People who seek out music will know it and appreciate it. They'll feel they've found something wonderful (they have) and share it with friends. But I don't know that it will find the audience it warrants because this is an album that should be a main review in Rolling Stone, should make best of lists for the end of the year.

When a relative got sick and I had to go Ireland, I was working on a review of this and Ani DiFranco's Reprieve. While I was in Ireland, I figured when I got back, there would be an excitement about both albums. That hasn't been the case. Ani fans I know have flipped out over her work. But it's still the case of a friend passing it on to get the word out. With David Rovics, I've been even more bothered because when friends ask for suggestions and I mention Halliburton Boardroom Massacre, their usual response is, "What?"

Is that a group's name?

What it's had me realizing (late in the game) is that the artists we know through other artists covering their songs, the good ones, not the schmaltzy ones, generally have had a big label behind them. Dylan and Nyro had Columbia, Ashford & Simpson had Motown. The labels worked those catalogues. For every Joan Baez and Judy Collins who heard a Dylan song and felt they had to cover it, there were others who had to be strong armed.

Even the most vapid chart maker today should be able to appreciate "Life is beautiful" (the album closer). It could easily be amped up into your standard chest/breast beater that the divas of both gender trot out when they want to prove they're so much more than the beats their producers supply them with.

But the reality is that's probably not going to happen.

Maybe it doesn't have to? At his website, David Rovics provides free downloads. (You can also purchase his CDs there and Halliburton Boardroom Masscre is also available at United for Peace and Justice's website.) You get a bonus DVD of videos with the collection. (Which will be reviewed in the near future at The Third Estate Sunday Review.) So if you're reading this and thinking, "Kat, they don't have this CD at my local store and I'm not about to fork over my hard earned cash on just your say so" -- well you don't have to.

The internet's already demonstrated it can turn the same cheesy music from unknowns into songs we all get stuck hearing. Maybe the test of the free flow of information we hear so much about will be whether or not it can build a following for an artist who really deserves one?

One more time, you can hear his songs at David Rovics. Don't take my word for it, trust your own ears. The answer to the question raised by Halliburton Boardroom Masscre ("Who is going to popularize these songs?") is you.