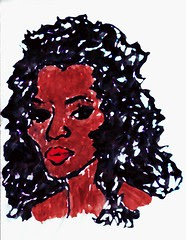 Kat: Diana Ross proclaims I Love You on her latest CD but it's no passionate embrace, just an air kiss. By the fourth or fifth song ["I Love You (That's All That Really Matters)" and "What About Love"], you start realizing this is what The Fabulous Baker Boys sounded like before they teamed up with Michelle Pfeiffer's Susie Diamond.

There were two reasons to hope with this album. For one, Ross was doing all covers so you didn't have to fear she'd co-pen a nightmare like "Work That Body" or fall into the landmine of esoterica that was "Pieces of Ice." Covers should have provided her with some solid material.

The second reason to be hopeful was that there was one producer in charge. Ross' finest Motown work always resulted from one set of producers, such as Ashford & Simpson, devising an overall vision.

On producers, she struck out. Had I known Peter Asher was the producer, I never would have gotten excited in the first place. It's not just that his work with Bonnie Raitt produced the soggiest sound Raitt ever recorded. It's not just that his work with Wilson Phillips destroyed their promising comeback. It's mainly that Linda Ronstadt achieved in spite of him. Ronstadt can go all over (range wise) but her voice always has a heavy bottom to it that managed to compensate for Asher's E-Z Play, tinkly arrangements.

Outside of some yelps in "Love Hangover," the growl throughout "Fool For Your Love" and in parts of "Eaten Alive" and "Swept Away," Diana Ross' solo work has been all high-end, no bass.

Well chosen songs might have made I Love You listenable but it wouldn't have made it art. Sadly, listenable doesn't appear to have been a goal either.

One of her more appealing performances comes when she takes on Berlin's "Take My Breath Away." But she kills the flight of the chorus by apparently being less concerned with conveying the song and more interested in being a grammarian. If you've forgotten that song, the chorus basically goes: "Watching in slow motion, As you turn to me and say, Take my breath away, Take my breath away." Now for some inane reason, Diana Ross is singing "You" in front of "Take my breath away" over and over. Apparently someone didn't think we could grasp the "deep" meaning of the song without that repeated "you"? The result is some spun candy that gave one hit to a group most never heard of before or after is beyond Ross' reach and that's pretty sad. You also wonder if she's about to go makeover her own songs out of some school marm zeal and turn "Ain't No Mountain High Enough" into "There Isn't A Mountain High Enough"?

That Ross, who in the past covered Billie Holiday, Josephine Baker and Barbra Streisand without embarrassing herself, is left to trip up on a novelty hit is really shocking. But what's frightening is how one dreary song drifts into another. Half-way through the first listen, with Sumner, Dak Ho, Toni, Maggie and, via the phone, Betty, I started shifting uncomfortably and tugging at my collar.

This went on for about two songs before I realized I was having reception flashbacks.

I might as well have been wearing tafetta in some loud, unflattering color because the music pouring out of the speakers was like the band every bride leans in and whispers, "They were not our first choice."

How the hell does an artist as talented as Diana Ross come off sounding so generic?

Choosing really bad, done to death songs doesn't help. When she's offering a tired version of the already tired "More Than Yesterday" or mangling Dusty Springfield's classic "Look of Love," you're left to wonder if she realizes what her power and place in music history ever was?

The Supremes, and later Diana Ross & the Supremes, held their own in the midst of the British invasion. In fact, the group she fronted scored more number one pop hits during the 60s than any group except for the Beatles. So when she's making like a Patti Page mouthing words she doesn't appear to comprehend, it's really troubling.

My own guess is that she wanted some of that easy Rod Stewart success: Do a half-assed job on some old (and moldy) songs and suddenly you're back on the charts! Myself, I had more respect for Rod when he was churning out crap like "Love Touch." But he and Diana Ross teamed up for a track on one of his three they-all-sound-alike albums and someone must have thought, "Diana can do this!" Yes, she can. But should she?

One listen to her umpah-umpah, Up With People take on "This Magic Moment" should have most people agreeing: No, she shouldn't.

One of the tracks available online (as a bonus) but not on the disc is Queen's "Crazy Little Thing Called Love." That was the way to go. That, Brian Setzer's "Bobby's Back," and other songs that gave a nod to the glorious 60s sound could have made for an amazing album. Instead, it's as though you're listening to a Vicki Carr tribute album. (If you said who, exactly.)

So she's released yet another CD that will be sought out by only the most devoted. The illustration is from a career retrospective that we did on Ross at The Third Estate Sunday Review. What a long, sad trip the musical career has been.

I Love You. She should. She should love each and every person who has stuck around this long. If she wants to do more than mouth empty words, she should head into the studio with Ashford & Simpson quickly or get used to mouthing those words to the "Mirror, Mirror on the wall."

the common ills
Posted by Common Ills at 9:52 AM