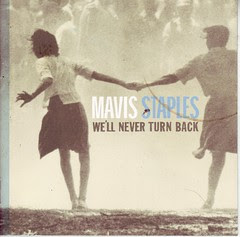 Kat: Aretha Franklin fan here. 2003's So Damn Happy left me anything but. And since? September 2004, she told Tavis Smiley, on his PBS show, her new album was "coming out. Clive is working on that, and should be out in about a month or so." July 2007, many months or so later, and it still hasn't. I might be chalking that up as a major loss except the album she was talking up to Smiley was entitled Duet, had already been recorded, and Franklin had trouble remembering who was singing on it with her. After listing Mariah Carey and Jill Jones, Franklin begged off with "having a mental block here." Perfectly understandable because those albums are forgettable. They're stunts and gimmicks and the graveyard of an artistic career. If the artist is lucky, the duet album sells well enough to get a few who never listened before saying "___ is cool!" long enough to buy the CD before quickly forgetting the same artist when the non-duet follow up comes out. There's little that's worse than coasting with a duet album unless it's, for instance, Diana Ross trying to make herself over into this century's Engelbert Humperdinck.

In 2006, Etta James' All The Way sported an artist still engaged with the world around her and the Baby Boys of music crit were too busy stroking their newly sprouted facial hairs, bemoaning the lack of 'beats' and fondling their own ignorance to appreciate it for what it was. Does the same fate await the new release from Mavis Staples?

("Pops") and daughters Cleotha, Pervis, Yvonne, and Mavis. Pops passed away in 2000 and the Grammys gave The Staples Singers their Lifetime Achievement Award in 2005. Baby sister Mavis first began recording on her own in 1969.

In 1988, she kicked off an association with Prince with the album Time Waits for No One but many listeners probably didn't pick up on the association until she proclaimed "They call me Melody Cool/ I was here long before U" on the Graffiti Bridge soundtrack (1990). The attention from that film allowed 1993's The Voice to get some attention.

But as a solo artist, she's never received the attention she's deserved. We'll Never Turn Back is the CD that came out this spring and it's really not garnering the attention it deserves. Ry Cooder's producing the album which Mavis has dedicated "In Loving Memory of Moms and Pops Staples" and finds her singing mainly traditional songs as well as few originals such as the amazing "My Own Eyes" (written by Staples and Cooder).

In the liner notes she writes, "Here is is, 2007, and there are still so many problems and social injustices in the world. Well, I tell you we need a change now more than ever, and I'm turning to the church again for strength. With this record, I hope to get across the same feeling, the same spirit and the same message we did with the Staple Singers -- and to hopefully continue to make positive changes. We've got to keep pushing to make the world a better place." That's a pretty lofty ambition even if you fail to factor in the Staple Singers' historic contribution to the Civil Rights Movement. But the thing is, Mavis is pulling it off.

The CD kicks off with Ladysmith Black Mambazo intoning "Down in Mississippi . . . way down" and then Mavis comes in proclaiming, "As far back as I can remember, I either had to plow or hoe" with the kind of confidence, assurance and presence I haven't heard since Tina Turner announced she was back with Private Dancer's "I Might Have Been Queen." Throughout the album, Mavis, in strong voice, mixes spoken word remembrances with the songs and the whole thing seems so perfectly blended that all the work that had to have gone into achieving that isn't showing.

On song after song, her vocals caress and explode in all the right places. As a Staples Singers fan and someone who never stops listening to The Voice, I thought I had a pretty good idea of what Mavis could do. I didn't know crap. That's what listening We'll Never Turn Back taught me. All her moments of brilliance, decade after decade since emerging in the 1950s, do not prepare you for what she's doing here. Whether singing along with background singers Lady Black Mambazo on "We Shall Not Moved" or cutting loose to emphasize a section, this is work she could have done with the Staples Singers and, at times, did do. But never so well, never so assured.

The exchange at the beginning of "In The Mississippi River" with Charles Neblett calls to mind the work she did with Pops, but she's nobody's daughter or baby sister here. She's a grown woman and a fully matured artist who's pulling (lifting?) everyone up to her level.

Cooder's playing on the album as is Mike Elizondo, Jim Keltner and Joachim Cooder and they serve notice that "beats" are much more than sterile samples inserted into a mix. In fact, listen to Keltner's drums and Joachim Cooder's percussion work on "On My Way" and you should forever swear off living with samples.

The album certainly serves as a historic remembrance of a period of great struggle and possibly that will turn some off? Some may not want to be reminded of the struggle and some may feel it's passe before they even give it a chance.

While I can certainly understand those who are old enough to have fought in the original struggle being weary, this isn't a tired album. Nor is it an album of nostalgia. It's very much, as Mavis gets across in the linear notes as well as in every track, a CD for today. "See now I ain't going to fight for no rich man's war, That's ain't what God's going to use me for" and "You can't fool all the people all the time" very much speak to the world we're living in today. (Additional lyrics Ry Cooder has written for "This Little Light Of Mine.")

In the song she wrote with Ry Cooder, "My Own Eyes," Mavis sings, "We need a change now more than ever, Why are we still treated so bad?" It's an amazing song and possibly the best example of a track where she mixes spoken word with singing, speaking of her father wondering what's happened, saying, "And I thought by now all of this should have been taken care of long ago." And it all take place over a jam that starts on a simmer and comes to a rolling boil by song's end.

It didn't take the Roberts' Supreme Court spitting on Brown v. Board to realize that racism's not only on the rise again but now enshrined in power thanks to the Bully Boy (and a do little to nothing Congress). At a minimum, We'll Never Turn Back will pour out of your speakers and have you dancing but don't be surprised if it does much more. In the end, the CD that's dedicated to her parents is a re-dedication to life and Mavis is mixing it up with the best of them -- a list that these days isn't a lengthy one. But she's done her part. Listen and you may be inspired to do your part.