Kat's Korner: Cowboy Junkies kick it up another notch 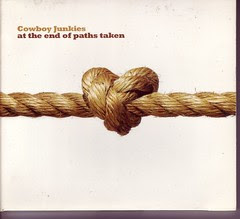 Kat: The Cowboy Junkies appeared on my radar, and on the radars of many who know them, with their second album, 1988's The Trinity Session. The stand out tracks for me were their covers of "Blue Moon" and "Sweet Jane" but the entire album was listenable and seemed to fit together and set a mood in the way that Sade's done on her best albums. After that, they honestly fell of my radar and might have stayed off were it not for an appearance on Laura Flanders' radio program where they discussed a number of topics including their new CD Early 21st Century Blues (2005).

For someone who hadn't listened to them in some time, that was a huge surprise and one of the best CDs of 2005. Since then they've put out a live set (CD and DVD) that I didn't really grab me. Their new studio CD came out last spring and is entitled at the end of paths taken. It's amazing.

The Cowboy Junkies are three Timmins siblings: Margo on vocals, Peter on drums and Michael on guitar. Non-relative Alan Anton rounds out the group and mainly with his bass playing. He also co-wrote three songs with Michael Timmins who is the group's primary songwriter and responsible (solo) for all the other songs on the CD.

The album hangs together wonderfully. If you loved what they did with Bruce Springsteen's "You're Missing" in 2005, you'll love what they're doing here which is going even deeper into meditations on life and loss. Those are the songs that work best for Margo's voice because she can sing a lament like few others.

When paired with Michael, as on "Someday Soon" where they take part in some vocal interplay, the voice can be playful, but, on most on the tracks, it's the haunted quality that Margo's staking out and she's digging deeper than you'd expect.

A lot is made of the second album being recorded in a church as though that accounted the purity in Margo's tones. She always had that ability to grab you and pull you in, whether she was recording in a church or a concert hall. Early 21st Century Blues shocked me because I had checked out and was surprised to find out how much she'd grown. That's not with vocal gymnastics but with her ability to shade and interpret. That album was so good it made my picks of the best of 2005.

I was expecting the next studio CD to coast -- and more than happy with that expectation based on the level reached. She has shaped up to be everything so many wanted from Annie Lennox's solo career. But she's growing by leaps and bounds these days and to listen at the end of paths taken is to feel as if she's been holding out on you. There are moments she grabs in the repeated phrase "And the rain comes down" ("Follower 2") that are completely unexpected and 100% thrilling.

This isn't a Margo Timmins solo album and after the you get over still more vocal growth, the thing that will probably hit you next is what a band the group's become. They're in there supporting the vocals and driving the songs. I just mentioned "Follower 2" and it would be a huge diservice to move on to any other song without noting the amazing drum work going on in that song. It is so inspired and pushes the song to another level without overtaking it. The Timmins and Anton have to be the best music combo today.

The keyboard work on "It Doesn't Really Matter Anyway" is perfection and everyone has their moments over and over in each song.

Two lyrical passages may best sum up the album. Both were written by Michael Timmins. From the amazing "Still Lost:"

Here we stand at the end of paths taken
(Guiding Light Inspiration)
The slow decline
The crumbling foundation, the stations, and now the cross
but we're still lost.

And from my personal favorite track on the entire CD, "Spiral Down:"

I've laid it out on paper
instructions of what to do
as my mind begins to waver
losing contact with you.

If all you know by the Cowboy Junkies is "Sweet Jane," you'll probably be eager to hear either of those tracks but, let me warn you, they aren't the band they were in 1988. They've matured well beyond their years. If I still voted in those Rolling Stone readers poll (I stopped the year 'readers' gave Backstreet Boys the prize for best band -- that was also the first year they allowed people who didn't purchase the issue with the ballots to vote so a lot of embarrassing crap made the list as various fan sites steered people to online voting), they'd have my vote for Band of the Year.

If we had anything resembling real diversity in radio, everyone would know this CD. It would be blaring from car radios and received like the musical equivalent of needed rain. at the end of paths not taken may be the biggest surprise of 2007 for me because I was expecting to enjoy it but to enjoy it because I assumed they'd remain at the level of their last studio album. Instead, they've yet again kicked it up another notch.

Check it out and you'll see what I mean. Miss out and keep confusing bombastic with what a band can do. You can find the CD in stores and online and more information at Rounder Records and at the Cowboy Junkies' website. But to really experience the beauty of at the end of paths not taken, you'll have to listen.

the cowboy junkies
at the end of paths not taken
laura flanders
the third estate sunday review
kats korner
the common ills
Posted by Common Ills at 5:11 AM