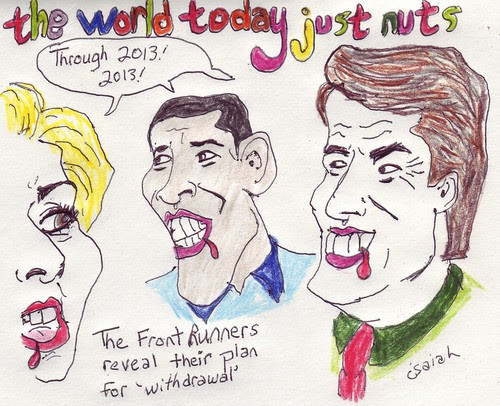 Isaiah's latest The World Today Just Nuts "Bloody War Hawks." Pictured are Hillary Clinton, Barack Obama and John Edwards declaring, as blood drips from their grinning mouths, "Through 2013! 2013!" Isaiah writes, "The Front Runners reveal their plan for 'withdrawal'." That's in reference to last week's MSNBC 'debate' where the three refused to promise that, if elected president, they would pull bring all US troops home by the end of their first term (2013). See Rebecca's "craven dems and disgusting peter pace," Kat's "Obama, Edwards & Clinton okay with US trops in Iraq until 2013" and this"Iraq snapshot" for more. There will be a morning entry from me. After it goes up, I'll change the time on this so Isaiah's comic is the top entry still.