Kat: It was Maggie who figured it out last week. "You know what I hate about Ben Harper CDs?" she asked before answering, "It's depressing to listen to them and realize they won't get half the radio play they deserve."

That really sums it up perfectly. Harper's always been dependable for a good album with a few outstanding tracks so it's easy not to notice the issue of airplay. But last year he released one of the best albums of the year, one of the best of the decade, the double disc set Both Sides of the Gun. Rock and pop stars have been waived into the rock canon on far less. But, think about it, how much airplay did it get?

when your whole world is shaken
from all the risks we have taken
dance with me into the colors
of the dusk
-- "In The Colors," lyrics by Harper, music by Harper and the Innocent Criminals

He's followed Both Sides of the Gun up with Lifeline. This is a Ben Harper & The Innocent Criminals CD and package. If you get the deluxe version, you've got a live DVD (the June 19, 2007 performance for XM radio, also included is a fold out poster of the group) and a booklet of photos. What's the DVD like? Go ask someone else. I can't stop playing the CD. Lifeline is so good you may never get to the bonus DVD. Lifeline is so great that it only underscores the sorry state of music that a Justin Timberlake is hailed as an 'artist' for being a sterile, studio product while a genuine artist like Harper has to do twice as much to see even a fourth of the attention. 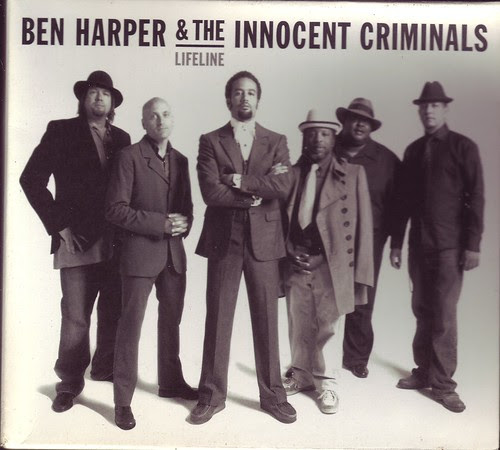 In eleven tracks, Harper and the band have issued a tight set with no fat on the bone. Individually, I know I love "Fight Out of You." After that, the only confusion is what I'd rank next best. Maybe "In The Colors"? Maybe "Younger Than Today" for it's reaching quality? When you can't pick your second favorite track it's usually due to the CD sucking. When it's due to the fact, as is the case with Lifeline, that there are just too many strong choices, you may need to check the calender to reassure yourself that it's still 2007.

Back in 1998, I found myself "right on"-ing Ani DiFranco while listening to "Fuel" (Little Plastic Castle):

people used to make records
as in a record of an event
the event of people
playing music in a room
now everything is cross-marketing
it's about sunglasses and shoes
or guns or drugs
you choose.


Oh, for the radio scene of 1998 which seems far more productive than anything today.

Which is why Maggie's right, listening to Lifeline does make you immediately go to the fact that a host of product passed off as artists get massive airplay while a real gem like Lifeline has to be discovered. Outside of country and rap, is there a station that can honestly say "If Your Heart Isn't It" doesn't fit their format? I don't think so. It's got enough life to cover a plethora of formats. But what actually gets saturation airplay is some overly produced song from which all the life's been drained of the 'performance' and of which the lyrics read like they were dashed off between Ag and study hall.

What's the point of the CD?

The losses we suffer, the losses we inflict upon ourselves and what can still be reclaimed. Maybe it's too "adult" for middle-aged radio programmers trying so desperately to act as if the Simpson sisters really are talented, with it and hot?

Years ago, before US magazine was a weekly, they did a feature called "Who's Hot? Who's Not?" On the latter, they offered things like (paraphrase) this to a photo of Donna Summer, "That hot stuff is getting cold. Warm up exercises required." If you need something that simplistic, a thumbs up or thumbs down, obviously, I'd give the album a thumbs up.

I could, and did in an early version, offer a run down of every track in terms of the instrumentation. I wasn't happy with that attempt at a review and I think it goes to Maggie's point about the disappointments listening will cause (you grasp something this great isn't going to get the big radio push). In a similar vein, I wasn't happy breaking the album down track by track when it's so beyond a mere collection of tracks. Maybe that's why I also have so much trouble selecting my second favorite track? Right now, if I was pressed to pick just one, I'd go with the title (and final) track. But I can't swear to that or, probably, even stick to it.

And the fact that this is due to so many strong choices goes a long way towards explaining why Lifeline is one of the strongest albums of the year.