Kat: In 1993, Judy Collins released Judy Sings Dylan: Just Like A Woman. If the title didn't make you grimace, you could enjoy the way she made songs such as "Sweetheart Like You" and "I Believe in You" her own. "Just Like A Woman"? Stevie Nicks, with assist from Dylan himself on harmonica and guitar, would show how to cover the song on her 1994 album Street Angel. In 2004, Judy released Judy Collins Sings Leonard Cohen: Democracy. As I've noted before, I rank it as the worst album of that year and also the worst album Judy Collins has ever recorded.
Fortunately, Judy followed that up with Portrait of American Girl which ranks as one of her finest. I selected it as one of the best of 2005. Unfortunately, she's followed up that excellent album with another really bad one.

This one is called Judy Sings Lennon & McCartney and it 'achieves' the miracle of being worse than even the Leonard Cohen album. Now we could dissect the album track by track. We could, for instance, note that "And I Love Her" should never have an arrangement that makes listeners fear Eydie Gorme is about to "b-b-b-blame it on the boss nova." We could note that not only, when Judy finally comes in singing the vocal, are her notes too high for the arrangement but they are apt to remind you a child rushing to a piano for the first time and, since most are right handed, pounding repeatedly on the highest keys. We could note that the only tracks that succeed are the ones where Judy's not being inventive but sticking closely to the original versions.

But instead, let's wonder what the point of this really bad album was?

Most of the time, when albums such as these show up, an artist is looking for an 'evergreen' that will sell easily out of the box and continue to be stocked for years to come. Judy better hope these covers go the way of Ella Fitzgerald's attempts at covering the Beatles because this isn't anything that's going to draw an audience.

Judy's now decided to record three albums that celebrated two songwriters and one song writing team. Is anyone else noticing that they are all men? Is anyone else wondering why, since "Both Sides Now" more or less made her for most of the public, she's off covering Dylan, Cohen, Lennon and McCartney instead of Joni Mitchell?

If women can't be counted on to celebrate female songwriters, who are we supposed to count on?

Now the Beatles' catalogue is an impressive one. If it's one worth exploring, you can't tell it from Judy Sings Lennon and McCartney because it goes for the most obvious choices. In fact, there's way too much McCartney and far too little Lennon for my taste even when you set aside the fact that it's a really bad album.

If you're looking for her to take on "Revolution," you will be disappointed. (She lacks the guts to cover that song.) This is so-so wall paper attempting to pass for 'pretty.' Which brings up the other major question, is Judy going to comment on the illegal war?

Now she's made a few statements about being against the illegal war to publications with very small circulation. She hasn't shown any real bravery, she hasn't turned up at any protests to perform and she never did at Camp Casey either. Joan Baez made it to Camp Casey. Joan Baez made it to DC to perform. Judy's rep, prior to "Both Sides Now," was as the poor man's Joan Baez. On her latest album, she's again offering a pale copy of Joan.

Baez, of course, did her tribute album to Dylan back in 1968, not 1993, entitled it Any Day Now and hit each song out of the park. Back then, Judy was starting to speak about against an illegal war. Today's speaking out comments from her can be summed up as, "The war is wrong, vote Democratic." That's pretty cowardly. But so is a grown woman, nearing seventy, sending out the message repeatedly that only the song writing of men is worthy of full album explorations. Now Jennifer Warnes explored Leonard Cohen (successfully) back in the eighties. I Am Sam's soundtrack was nothing but yet another tribute album to the Beatles. So there's no bravery in Judy's selections and this latest release doesn't even comment on today. In fact, it's really embarrassing to hear Judy, closing in on seventy, muse whether or not she'll still be loved when she turns sixty-four.

So for me, a woman who is against the illegal war, Judy Collins' latest CD not only makes for a really bad listen, it makes for embarrassing 'statement.' Listening, I had to wonder about the image we all have of Judy in a bed of wildflowers willing peace. Like the other alleged "peace queen," Carole King, demonstrated recently, peace is apparently to be pushed in song after song when the country's not engaged in an illegal war. When it is, Our Ladies of the Peace suddenly grow strangely silent. In the process, they flirt with charges of hypocrisy while risking ruin to the images they've so carefully crafted.

On Judy, I checked out five reviews of this piece of crap album to see if I was missing something. No. In fact, I know more than many who've bothered to review it. For instance, one young man (you knew it was a man, didn't you?) felt the need to advise that the album would be a 'treat' for "your" (apparently young album buyers) mother. For the record, those nudie shots Judy did on album covers weren't aimed at women. (Judy's always had a very straight audience.) Even then, Judy was 'celebrating' men. They made up the bulk of her audience. "Your fathers" might get a treat out of the album but I would hope most women would see the track list and wonder exactly why Judy Collins, a feminist, is yet again doing a tribute to men?

My clearest post-Vietnam, pre-90s memory of Judy Collins remains a documentary for PBS on working women. While various women were shown performing various tasks and interacting with other women, Judy was filmed (through heavy gauze) in her garden spouting New Age bromides that were embarrassing even then, especially as other women were talking about the difficulties they had getting respect in a job, for instance, where they wore a hard hat. Judy's always seemed to be about the fellows, even in concert. "Admire me, admire me, fellows only" was how one performance at the end of the 90s struck me and had me wondering exactly why I wasted my own money to see her live when it was clear the entertainer on the stage was playing to only one portion of the audience?

When Joan was touring behind Dark Chords on a Big Guitar, she wasn't trying to create a cult. She blew us away with her amazing performances and, between them, offered these hilarious stories and these strong statements against the illegal war. I haven't seen Judy live since the illegal war started but I can't imagine, in her symphony backed performances, she takes a moment to tell her aging audience, decked out in their night club finest, that the war is illegal.

Judy's still the poor man's Joan. A pale copy. A woman who appears to have issues with other women which would certainly explain that long ago broken promise to Joni Mitchell. See, she loved Joni's songs, she told Mitchell over the phone, they were amazing. She wanted her to come to a song writing workshop. Joni was all hopped up with excitement. But the promised travel arrangements didn't surface. After the workshop had started, a sheepish Judy called and begged her again to come. That old tale's from the sixties. There's been very little done in the time since to demonstrate that Judy's comfortable sharing the stage with other women.

I went back and forth trying to find some reasons that would justify the hideous Judy Sings Lennon & McCartney. Patti Smith and Carly Simon record for Columbia and have both noted that the label made it clear they weren't interested in new songs written by either artist. Even so, both managed to make statements that spoke to and of today. Judy Collins records on her own label (Wildflower) so the only 'flack' she gets is from herself. Dolly Parton and Etta James both recently dipped into the past and still managed to comment on today with wonderful albums. And of course few can top Mavis Staples' We'll Never Turn Back. Those women managed to say something and there's nothing preventing Judy from recording what she wants or preventing her from making a strong statement about today (other than Judy herself).

Not being a fan of cowardice, I decided I needed to make a stronger statement than just letting dust gather on the CD cases so I packed up all my Judy CDs, as well as the other faux peace queen Carole King, and put them on a high shelf in the closet. I should probably sell them but I'd hate to think someone might hear their earlier work and think, "At last someone who believes in peace!" Clearly, from their latest output, neither woman believes in peace enough to make any kind of an artistic statement while their nation is involved in an illegal war.

As I packed up the CDs, I was still trying to find something positive to say about the wretched Judy Sings Lennon & McCartney. I noted the cover shot, a close up of her face, and how she "looked good for her age." Of course, Joan Baez looks alive. And, of course, Joan cut off all that hair a long time ago, even when, back in the seventies, labels were telling her she'd sell better if she'd just let her hair grow long. It wasn't where she was at. The sixties were over and Joan was too busy with her art and her politics to serve up nostalgia trips. The photo below is a screen snap of Joan from Democracy Now!, performing at a DC rally against today's illegal war. Joan's an attractive woman. Not "still attractive." And that has to do with the fact that she hasn't sealed herself off from the world or lived her life playing it safe. 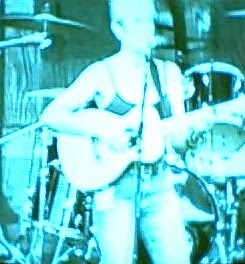 If anyone's feeling bummed out, don't let me leave you on a bad trip. Joni Mitchell's Shine comes out at the end of the month. It's her first album of her own songs since 1998's Taming the Tiger and it is brilliant. I can't stop listening to it. I begged C.I. to get me an early copy and believe I promised I wouldn't break "street date" with my review. (The album comes out September 25th.) But for those who've carped about Joni's vocals in recent years, her voice is warm and sure. For those wondering about the production, it's got the warmth of Night Ride Home, Blue and Hejira. In fact, "One Week Last Summer" is so beautiful, you may find yourself stuck on that first track repeatedly. I could write a rave of it right now but I'll wait until it's released. One point I will make is that she's updated "Big Yellow Taxi" (Kat note, corrected. Originally I typed "Both Sides Now.") I don't mean she's done like Judy and covered an older song, I mean she's added to it lyrically and given it an amazing arrangement. Shine is wonderful and it should make all of the "best of" lists for this year. If you read a negative review of it, you're dealing with a squishy centrist who can't take art that fulfills its role: commenting on the world around us. For those weak asses, Judy Sings Lennon & McCartney. provides their needed bad nostalgia trip. They deserve it and she deserves them. The CD should be subtitled "Judy Sings for the Useless."