Kat: Elaine loves Jack. Ava and C.I. seem to as well. Me? I've never been all that wild about the man. Don't get me wrong, he's attractive enough and the way he moves his hips would seem to suggest he's got a clue in the bedroom. Just last week, I saw this:

In the back yard, Johnson's wet suit lies over the clothesline. After taking a leak on the lawn -- better than blowing a gallon a flush -- Johnson straps himself into the suit, grabs a board and hikes barefoot over a quarter mile of gravel to reach the shore break. It's late in the afternoon, with a blasting orange sunset, and though the mammoth waves have failed to materialize today, nice ones are rolling in.

Yeah, he's on the cover of Rolling Stone now. He's even spent several weeks at number one on the album charts with his just released Sleep Through The Static. And purchasing the CD, I heard something to similar to the above as I walked through the parking lot and a couple in front of me, who'd also purchased it, were opening it and marveling over "Look, no plastic." The CD's in a paper "jewel" case and listening to the couple in front of drone on about how amazing that was (all of Jack Johnson's past CDs have been released in the same packaging) really drove home why I've had such an estranged relationship with Jack. 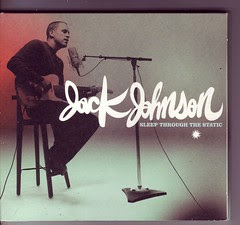 He's so good, he's so Christ-like, he's so -- the couple couldn't stop yammering. Reality is that to get inside the jewel case they had to remove a plastic wrapping. I know not just because I had to do the same thing, but also because I watched them do it and then, not thirty seconds later, they were marverling over how "no plastic" was used.

I feel the same way about his CDs. "It's amazing!" I'm told. I listen and, while there's no question that he's gifted with a great voice and is immensely talented on the guitar, there's one or two tracks that make it for me. In fact, listening to a Jack Johnson album is bascially figuring out which track should go on the mix tape or disc. "Gone"? That's the one. "Never Know"? Absolutely. "Sexy Plexi"? Probably. They're the strongest things on three studio albums. The albums are not bad and Elaine loves all of them. But they just don't make it for me. In fact, the only Jack Johnson ("and friends") CD I've listened to repeatedly is Curious George, the soundtrack to the animated film (which also features Ben Harper, whom I love). Brushfire Fairytales, on and on and In Between Dreams aren't CDs I can't listen to, I just don't want to. If I pop one in, I'm generally going to the one track or else tuning the thing out.

So along comes Sleep Through The Static and, it's not just the best thing he's done, it's actually a CD that holds up. From the moment he sings "All at once, The world can overwhelm me . . ." on through to "Losing Keys," this is a CD I gladly play all the way through. Musically, he grew through each album, only improving his guitar skills and learning to shade his vocals. But what makes the album for me, and why I think it's selling so well -- at a time when no one's selling -- is that he's got a little wisdom on him. I'm not joking.

Had he continued on the direction he was headed, the tribute to Don Ho with a "Tiny Bubbles" 'master-mix' waited just around the corner, maybe with a role as Moondoggie in Gidget: The Musical. Those who just want Brushfire Fairytales served over and over should take comfort in the fact that track five could have fit on that album very easily provided you don't listen too closely. If you do listen carefully, "Enemy" may lay a trip on you.

And hasn't the world laid one on all of us in the last few years? The smartest thing Johnson did was acknowledge that and enlarge his landscape because not doing so was begging to be seen as, if not Up With People, at least this decade's Osmonds. As a result, he's done two amazing things. First, he's managed to sell the album at a time when no one is moving many units. Second, he's topped the charts with an album that actually deserved that spot.

What I like best about the CDs are the colors. The music has so many shades and shimmers that every word of praise Elaine's had for Jack over the years now seems justified. After the colors, the perspective and lyrical lines such as "The future is an empty promise" bring a maturity that's been missing from the top of the Billboard charts pretty much non-stop since 1997. And it brings a maturity to Johnson's work that's been missing as well. Lyrically, too many of his past songs seemed like the set-up and lacked a follow through. Can we Sleep Through The Static? In the title track, Johnson seems to answer only if we sleep in denial. It's the reality that "Gone" seemed headed for but never got to. No offense to Elaine, whom I've debated Jack Johnson with for years, but the way I see it, he was a talent. Sleep Through The Static is the birth of an artist.