TORONTO, June 23 /CNW/ - With less than 16 days remaining until U.S. war
resister Corey Glass' scheduled deportation, three parliamentary parties and
Amnesty International are urging Prime Minister Stephen Harper and Citizenship
and Immigration Minister Diane Finley to cease deportation and removal
proceedings against Glass and U.S. war resisters seeking refuge in Canada.
The federal government's July 10 deportation order against Glass is still
in effect, creating enormous stress, anxiety and turmoil for him and all war
resisters and their families who are hoping the government will be guided by
the expressed will of Parliament.
The successful passage of a June 3 landmark parliamentary motion called
on the Conservative government to allow U.S. war resisters who have refused or
left military service related to the illegal invasion of Iraq, and their
immediate family members, to stay in Canada and be able to become permanent
residents, and to immediately cease any removal or deportation actions that
may have already commenced against such individuals.
A poll carried out in June 2007 by Stratcom Ltd., showed that 64.6% of
Ontarians agreed that the war resisters should be allowed to stay in Canada.

The above is "Parliamentary parties, Amnesty International call on Prime Minister to stop July 10 deportation proceedings against U.S. Iraq War resister" and Canada's War Resisters Support Campaign will hold a "Rally to Stop the Deportation of Parkdale Resident Corey Glass" July 3rd, begins at 7:00 p.m. (with doors opening at six p.m.) at the May Robinson Building, 20 West Lodge, Toronto: "In 2002, Corey joined the Indiana National Guard. He was told he would not have to fight on foreign shores. But in 2005 he was sent to Iraq. What he saw there caused him to become a conscientious objector and he came to Canada. On May 21, 2008, he got his final order to leave Canada by July 10, 2008. Then on June 3 Parliament passed a motion for all the war resisters to stay in Canada. However the Harper government says it will ignore this motion." And below is a video from the War Resisters Support Campaign:


And we'll note this from Iraq Veterans Against the War on Matthis Chiroux:

IVAW members Matthis Chiroux and Kris Goldsmith have been pounding the pavement in Washington DC, with the help of IVAW's DC chapter, to get members of Congress to support Matthis in his refusal to deploy to Iraq. Matthis was honorably discharged from the Army in 2007 after five years of service, but he received orders in February 2008 to return to active duty from the IRR for deployment to Iraq.

On Sunday, June 15th, the day he was due to report for active duty, Matthis stood with his father and supporters in DC and reaffirmed that he is refusing his orders on the grounds that the Iraq war is illegal and unconstitutional.

How you can help:

Click here for the latest info on Matthis Chiroux.

The following two stories (Creason and AP) are on people who may have checked out. They may or may not be war resisters. We only consider someone a war resister at this site if they say so publicly. Naomi Creason (Pennsylvania's The Sentinal) reports 21-year-old Angela A. Myers was arrested in Carlisle for being missing from the US army when a car she was a passenger in was stopped "for a traffic violation," being held at Cumberland County Prison and due to be transported to Fort Lewis. Steve Margeson, local police chief, estimates the last arrest for the same charges was "at least a year" ago while Jeff Ilgenfritz probably comes closer to explaining how the passenger in a traffic stop was 'picked up' when he reveals "the county has a contract with Carlisle Barracks, which usually picks up the desertion cases." US army Captain Ronald Hillegass explains the process is to give the self-checkout a ticket to Fort Knox or "their installation where they last stationed" unless they are considered a flight risk -- in that case, they escort them. The article goes down quickly from there with the reporter accepting the military's word for the desertion rate in 2008. Not only has the military been repeatedly caught fudging figures, there's no way that the number for those who left in the first half of the year could be known. 30 days is the rule before you can show up as a deserter and that is the earliest. The reality is that it takes much longer to show up on that list. The military's claim should have been presented as a claim (381 is the number of deserters for 2008 -- from January "through May" -- that she's fed and presents as fact).

Meanwhile AP reports 20-year-old Christopher Powell was stopped with his wife in Fargo, North Dakota after they apparently didn't pay for gasoline they put into their U-Haul and he received a sentence of 90 days in jail but "is also being held for the Army on suspicion of being absent without leave".

Lewis notes Paul Wisovaty's "Notes from the Boonies" (Vietnam Veterans Against the War):

Joe Miller delights in chiding me because I never show up at any of the progressive get-togethers at the University of Illinois, which is about twenty-five miles up the road from my home town of Republicanville. Actually, it's called Tuscola, but sooner or later the City Fathers are going to get around to changing the name. Certainly no one will object. Then, as Joan Baez once crooned, "When summer comes rolling around, we'll be lucky to get out of town."
No, Joe, I don't get up to the old alma mater much, largely because I am extremely uncomfortable in any large metropolitan area with more than 5,000 people in it, and certainly in any such city that has one-way streets. Besides that, I just turned 61, and I don't see well at night, which is when most of these events are held. But Iraq Veterans Against the War recently sponsored an anti-war rally at 5 in the afternoon, so I sucked it up, climbed into my 1992 Bonneville and headed out on the interstate.
About seventy-five students showed up for the event. I was just there to represent VVAW and listen. When the two IVAW guys got up to talk, one of them graciously said to me, "Paul, come up and stand next to us. You've earned that." I was sincerely honored by the invitation. 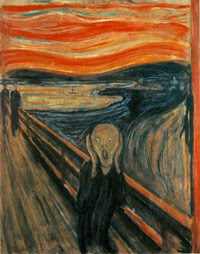 Tomorrow, Senator Obama has a choice.

He can vote to defend the American people and the U.S. Constitution.

Or he can vote with the snooping Bush White House and the telephone companies.

The bill in question grants immunity to the phone companies that illegally participated in the White House's warrantless wiretap program.

Obama says he will seek to remove the immunity provision - but will vote for the bill if that doesn't succeed.

Senator Russ Feingold (D-Wisconsin) calls the bill a capitulation to the phone companies and to the White House.

According to Senator Feingold, under under this bill, "the government can still sweep up and keep the international communications of innocent Americans in the U.S."

Last October, Obama said he would "support a filibuster of any bill that includes retroactive immunity for telecommunications companies."

Now he says he will vote for it.

Liberal Democrats are surprised and outraged that Obama would flip-flop this way.

But we're not surprised.

From the beginning, we saw through Obama's "Change You Can Believe" mantra.

Obama is just another corporate candidate.

We're here to give the American people a choice in November.

You can support the corporate candidates - Obama and McCain.

Or you can shift the power from the corporate candidates and the corporations to the people.

Increasingly, progressives and liberal Democrats are seeing the light and breaking away.

paul wisovaty
Posted by Common Ills at 5:53 AM