When [Corey] Glass was discharged from active service in December 2006, he was put in the Individual Ready Reserve (IRR), [US army Major Nathan] Banks said, for soldiers who have served active duty but have time left on their military contract. Glass, who signed up in 2002, would have IRR status until 2010.Of the 1.7 million U.S. military personnel who have served in Iraq since the start of the war, a little more than 5,000 have been from the IRR., Banks said."His chances of getting called up are slim to none," Banks said. But that chance is still there, he acknowledged.
Glass said until he receives a DD 214 -- a form from the U.S. department of defence that confirms he has been discharged from active service duty -- he can still be charged when he returns to the U.S.
He said military lawyers have told him if he shows up to Muster, he will be charged for AWOL desertion."The only contact the Army has had with me is they called my mother to tell her what a disgrace I was," he said of his mom, Lisa, who lives in Indiana.

That's from Brett Clarkson and Jason Buckland's "Resister still wary of U.S. " (Toronto Sun) and Clarkson and Buckland are obviously 'in the tank with the Pentagon'. That last part was sarcasm (they're not 'in the tank' -- see previous entry for what I'm referring to). Staying with the topic of war resistance in Canada, Lindsey Wiebe's "Activists target Bruinooge's office" (Winnipeg Free Press) notes:

Half a dozen Winnipeggers staked out the Pembina Highway office of Conservative MP Rod Bruinooge yesterday to support American war deserters seeking refuge in Canada.
"These people are refusing to serve in Iraq on conscientious grounds," said Michael Welch, a peace activist who helped organize the rally in front of Bruinooge's strip-mall office."I do definitely feel that there is a call to stand in solidarity with them."

Which is actually a follow up to the paper's "U.S. deportee gains local support:"

Michael Welch is planning to be at Bruinooge's office at 4 p.m. and said that he will not leave voluntarily until Citizenship and Immigration Minister Diane Finley rescinds the order to deport Corey Glass.

Jillian notes this from the Ralph Nader campaign: 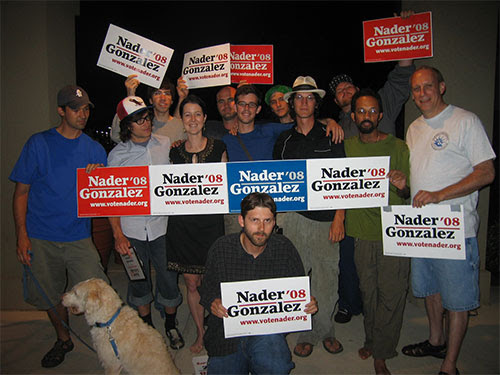 Ralph Nader said on ABC's This Week that the Nader/Gonzalez campaign will be on at least 45 states in November.

Well, time to get it done.

We've got one for you.

Become a Roadtripper for Ralph.

Collect signatures to put the Nader/Gonzalez team on the ballot.

Check out Ralph making the pitch for more roadtrippers in this video.

You did it in six days. 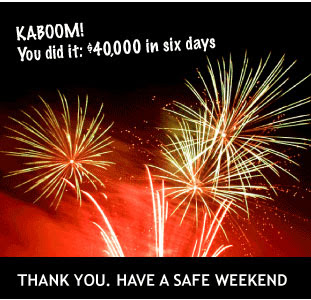 Thanks to you, Nader/Gonzalez will be on the ballot in ten states, as promised, by July 6.

We must now thank all of our roadtrippers. (Pictured above - our Illinois road trip crew turning in their signatures last week.)

You help fund them.

But they go out - day in and day out - and collect the necessary signatures to put Nader/Gonzalez on the ballot.

Our nationwide team has been busting it all around this country.

As they say - what was collected in Nevada, stays in Nevada.

And as a result, Nader/Gonzalez will be on the ballot in that key swing state.

Finally, why we are doing all of this?

We are doing this because we have no alternative.

McCain is the candidate of perpetual war.

Obama is the corporate Democrat and panderer in chief. (Still doubt it? Check out this article in the New York Times documenting his flip-flop on telecom immunity and the political fallout.)

Let's keep our eye on the ball.

And get it done.

By the way, Ralph is in Honolulu, Hawaii tonight for a campaign speech and rally. If you are in the area, please stop by.