Kat: Phoebe Snow's concert CD is entitled Live but I see the title more as an urging than a heads up that her latest project results from two nights of recordings at the Bearsville Theater in Woodstock. I'm just not sure if Phoebe's urging us to live or herself? 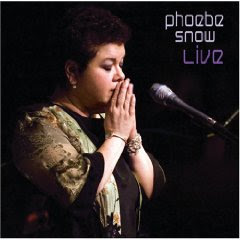 "Lady luck and four leaf clovers, Won't ease this hurt I feel all over," are the albums opening lines as Phoebe launches into Jeffrey Bowen's "Shakey Ground" -- a song that stands out both for her vocal lines and Roger Butterley's guitar work. It's the first of eleven tracks and each is a treat for differing reasons.

Take the closer, "With A Song In My Heart." The Rogers & Hart song may remind you of a time when the duos songs were regularly reworked to be something more than Broadway fare. The Marcels "Blue Moon" falls into that category but so does the Mamas and the Papas reworking of "My Heart Stood Still" and Janis Joplin's "Little Girl Blue." Reworking, not doing (or attempting and failing at) a note-by-note recreation of the way the song was performed in the midst of a musical, didn't just breathe new life into a standard, it provided an opportunity for real artistry to shine. And that happens on Phoebe's cover of "Piece Of My Heart." There is Janis' amazing version and then there are the leather-lunged versions of the last few years. Phoebe's not attempting to be a Drag King. This isn't "Piece Of My Heart" as Bruce Springsteen might do it (yes, that is frightening) if he were a woman. It's Phoebe relating to it as an artist and, yes, as a woman.

Unlike Bruce's carbon copies, Phoebe's able to bring adult feeling onstage and not just indicate what they think the boys in auto shop dreamed of back in the day. If you know Phoebe's recent heartaches, you know how easily a song like "Piece Of My Heart" could have turned maudlin. (If you don't know Phoebe's recent loss, see The Women of the Web's "Singer Phoebe Snow Discusses Living Life After Daughter's Death.") Instead, Phoebe just adds a different shading that makes it her own.

She does that on Something Real's "If I Can Just Get Through The Night." That late eighties tune was a lush drama originally. Now it's got a funkier beat and it's more conversational. Phoebe's looser on it vocally, hitting and holding notes she ignored in the original. She's coaxing the listener and coaxing herself as well.

Phoebe Snow established herself as one of music's most significant talents with one song "Poetry Man." In fact, it took less than half of the first verse to make that proclamation. That 1975 Snow-penned classic makes the album. What stands out to me on this version is how the softer vocal sections are even softer and how her voice is more elastic on this recording, switching ranges with greater flexibility and ease than I remember.

"You're My Girl" follows, dedicated to her daughter Valerie, and the flexibility and ease continues along with a swelling and tightening on her vocal that goes beyond loud and soft or modulation. More than any of her peers, Phoebe Snow's always resembled the vocal equivalent of a saxophone.

Phoebe makes Huey "Piano" Smith's "Rockin' Pneumonia and the Boogie Woogie Flu" her own, dusts off and breathes life into the doo-wop classic "It's All In The Game" but it's probably on her own "Natural Wonder" (title track to her 2003 album) that she allows herself the most exploration.

"No more sorrow/ Forgiven by tomorrow/ That's what I pray my time with you allows," she sings. Glancing at the track titles may give the impression that they were chosen at random. Listen and a theme emerges.

Is Phoebe urging you to live or reminding herself to? It's a little bit of both and it takes a real artist to invite you on the trip with them as opposed to telling you about it after. As always, the journey continues for Phoebe Snow . . . and for any smart enough to grab their bags and take it with her.

Live is available where CDs are sold, via online orders and as a digital download -- I downloaded it from Amazon.

phoebe snow
live
the women on the web
janis joplin
the mamas and the papas
kats korner
the common ills
Posted by Common Ills at 6:06 PM