Kat: Shortly after Bruce "The Twinkee" Springsteen was doing his ambiguous best to have the stardom that was denied throughout the seventies, Tracy Chapman emerged to demonstrate what it meant to be "talking 'bout a revolution."

On her self-titled debut, that was always my favorite song and clearly it's a favorite of Chapman's as well since the song starts playing every time you visit her website. She's got a lot to be proud of with that song and with that entire album. At a time when African-American performers were regularly being sidelined at the 'big event for change' concerts of the eighties, Chapman ended up a headliner on an Amnesty tour on the basis of that first album because it was just too brilliant to be denied.

It was also impossible to top as subsequent albums demonstrated and, worse yet, it appeared impossible to even match. That 1988 masterpiece included the huge hit "Fast Car" as well as many other masterpieces ("Baby Can I Hold You" and "For My Lover" being two examples). If she never did anything else in her career, she could point proudly to that album. 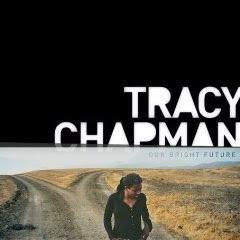 As 2008 drew to a close, twenty years later, Tracy ended up with another masterpiece on her hands. Our Bright Future was released in November and my big struggle with it is attempting to figure out whether Tracy did herself in with too many releases (thereby killing the enthusiasm) or whether sexism and racism are at play? I think it's a combination of all three but watching the usual drumbeats thump-thumping for Bruce Springsteen, the typical corporate rock marketing that they trot out with each Springsteen release, it's amazing to notice how low key the response to an actual album of art is.

That's the first track on her CD. As I explained at my website last week, I was driving to the next speaking engagement, Ava was in the front with me and C.I. was in the back teaching Wally the chords to a song that ended up being "Sing For You." Wally had them down and was putting it together when C.I. sang the lyrics and I went from "Where is the turn?" to "What is that song?" in about two seconds. When I was told it was Tracy Chapman, I was excited and then a little worried, a little depressed.

If you've purchased more than two Tracy albums in the last twenty years and counting, you probably understand that. You stop hoping this new album will be the one that matches the first. You start hoping that there are just some strong tracks on it. Unless Tracy has done "Sing For You" as some techno mix, I knew there would be one strong track. And the rest of the day, as we spoke to various groups about the illegal war, I kept thinking, "As soon as we're back at the hotel, I'm downloading that album."

Which I did. And though this is far from my first download, it was a sign of how eager and nervous I was that I seemed to forget everything. I was using Amazon and the message popped up saying the tracks were downloaded. I was so thrilled! That was so fast! Oh, wait, they have to switch over to Windows Media Player. Yeah, I knew that. I knew that and knew it could take three to five minutes. But I forgot because all I wanted was to hear the album and hear it right away! (Yes, this really is right away as anyone who's ever waited and waited for the street date of some release knows. I can remember attempting to bribe a guy at Tower to get Tango In The Night back in 1987 and, when he turned me down, contacting an old friend at a local paper and having a one night stand where, on the way out, I just happened to help myself to his review copy of Tango.)

"Sing For You" was the first song and what a beautiful song. If the album not only began with this song but also ended with it, if it was only one track, Tracy would have something to be proud of. I was tempted to play it again but wanted to hear the entire album right away.

"I Did It All" has a slow gallop tempo and right away you know it's going to be a story song just from the music. And they demonstrate a real talent for lyrics that we might not expect from Tracy. I think we all expect her to cut to bone and speak for us in first person when it comes to those life moments that leave us curled in a fetal position and we certainly expect her to provide us the fist-pumping anthems but her word play here is really something. "Smoked second-hand in crowded bars, With the A-list of B-list movie stars," she explains and it's not just a good song, it's a wonderful sequencing track because it puts the listener in a different place. Had it come near the middle or end of the track list, a first listen would have been more anxious but track two just puts you in the right place. It also sets the stage for "Save Us All" which could come off preachy with a different arrangement but especially benefits from following the story song. Tracy's taking a child's look at religion in this song. (Similar to a child's boast on the playground of their parent being better than someone else's.)

Three tracks in and she's got a winner of an album.

To my father what of your sons?
All of your children
Even the ones
Sent out to martyr
To face the gun
Precious bodies opposed to bombs

So opens track four and you may find yourself, like me, thinking, "And Bruce is off blubbering about some bandit in a diaper?" This is just a startling mature album with an immediacy that I find difficult to believe is going to age. Tracy's vocals are strong and sure throughout and she co-produced this album with Larry Klein (yes, Joni's ex-husband).

There are eleven tracks and I go track by track, I can tell you who played what instrument, I can talk about Tracy's acoustic guitar work or her vocals, I can talk about how every song is arranged perfectly -- not 'to perfection,' it has a clean sound, not a fussed over one -- and even explain to you how this album not only matches her debut but may even pull slightly ahead of it.
What I really should tell you is you want headphones for this CD, you want these shared observations to come to your ear and only your ear because the album's this amazing chat with a friend.

See, Tracy's never been so sure in her talent. There's a confidence that has you feeling so happy the way you do when a friend who, for example, has been dating a loser, putting her life on hold and just negating her own worth finally wakes up. You're not just bursting with pride for her, you're not just wanting to hug her, you're inspired by her bravery and art is bravery which is why Our Bright Future may in fact top Tracy Chapman.

There are also so many contradictions (planned ones such as the ending of "Think Of You" which negates much of the earlier boasts in the song) and it's the album of a woman who's lived some, the simplistic views of earlier years have faded. It's a grown up and delightful album, even a sexy one. (On the latter pay attention to her guitar playing and vocals on "A Theory.")

I hope if you bumped into Tracy on the street and asked her, "Are you becoming the woman you always wanted to be?" that she'd respond "Yes!" because that's how the album plays out. She's sounds like a woman comfortable and confident in her art.

The only real bad news is that "Spring" ends the album. It's probably the most delicate song of the eleven -- in arrangement and in vocal. And it's really beautiful. But while she's singing of waiting for spring, it will probably hit you quickly that -- live album aside -- you're going to be waiting two to three years before the next Tracy Chapman album. In the meantime, you've got Our Bright Future and it's truly amazing.