Kat: In March 2006, Ben Harper released Both Sides of the Gun, easily one of the decade's finest. The double disc album (a bonus disc made three in the deluxe edition) charted the world and charted the heart. It was the benchmark album for Ben's career and I eased in to a series of follow ups which would be pale copies of the same theme. Instead, August 2007 found him releasing Lifeline which only shared in common with the previous allbum that both were brilliant. With Lifeline, Ben went off into vocal and musical terrain, finding and exploring sounds and, yeah, giving voice to the lifeline. The only problem with the album was identified by Maggie who noted that it was so good it hurt to listen to it because you knew there was no home for it on 'modern' radio. 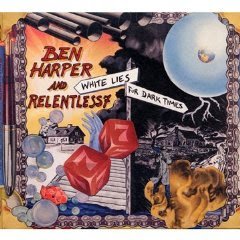 Last month saw the release of White Lies for Dark Times and Ben teaming up with the Texas based Relentless 7 apparently to take further the musical explorations he started on Lifeline. It made it to number 9 on Billboard's album charts. One of the singles from the album is "Fly One Time" and it's a showcase for Ben's vocals and guitar work. With the drum and bass work, it's an obvious choice for the single. "What we may never find, so fly, so fly, one time, so clearly, so clearly, so high, fly one time, just fly one time, if you fly one time, if you fly one time." That's a section of the song, probably the strongest and most passionate. And reading the lyrics, you'll have no idea.

If you haven't heard it, you'll have no idea where Ben's going with his register, with his notes, the way he bends and comes close to strangling a phrase and the release that follows.

Ben's a rocker at a time when rockers know they better live on the road because they're not living on any radio station other than "classic rock" ones. "You gotta keep it together," Ben advices/insists/cautions on another song and, if it got airplay, it could easily become the theme of summer 2009. And that's the only problem with the album, realizing how great it is and how few will hear it. But maybe something like White Lies For Dark Times couldn't be created if rock was the voice of corporate America? Being that is certainly killing off all the excitement in rap and maybe rock going back to the trenches will put some excitement back into it?

The other single from the album is "Shimmer & Shine" and they go to the second star of the album, Jordan Richardson who provides some amazing drumming work here that never goes for fussy or tries to draw attention to itself but provides the steady, muscular beat the album offers. Toni swears it's a Led Zeppelin sound and, before you scoff, Relentless 7 used to be a Led Zep cover band. To me, they're the ultimate jam band and, with Ben and Relentless 7 scheduled to rock out at least six festivals this summer, I wouldn't be surprised if that became the consensus view around August.

By that time, a lot of people will have heard the album and it's a shame they won't catch it on the radio but rock's music of the road and Ben Harper will be one of the hottest tickets this summer.