Kat: I was born at night but it wasn't last night, how stupid does Amazon think I am? That was my question as I checked out the pricing for Regina Spektor's Far. The standard album was $9.99 to download. The "deluxe" was $13.99. $13.99? Uh, why didn't I just breeze through Best Buy and pick up a CD?

I do two screens so I can go back and forth and see what the big difference is? You know, what justifies them charging $13.99 for a download? The standard version is $9.99 and has 13 tracks. If you go "deluxe," you download two extra tracks for $13.99.

So you're paying $4.99 for two bonus tracks that weren't judged good enough to make the standard album?

So you're paying approximately $2.44 for each of the two songs? 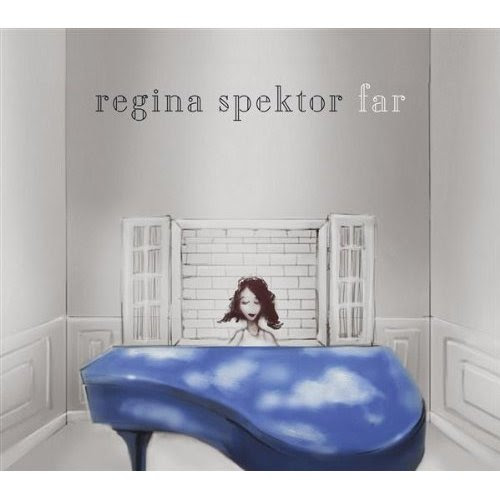 And then what have you got?

That's from "Laughing With" and the beat's jaunty and Regina's in her upper range on it and it might be the first part of the song (it's the chorus) that really stands out for you. But then you may notice the slower musical walk of the verses and the starker vocal during that. You may notice what she's captured in the verses:

It's an ambitious song and it's not like rock or pop is often known for any ambition other than, "How many units did we move?" But Regina Spektor's going for art. She's following in the footsteps of Joni Mitchell, John Lennon and others. And, bit by bit, she's steadily proven she's got the chops to do so.

Which is not to suggest that Regina's as confessional as either of the two or as confessional as Carly Simon for that matter. I have no idea if she's confessing a damn thing. She's writing songs filled with characters and incidents which may have something to do with her own life and inner demons. Then again maybe not.

Her skill as a lyrical writer appears to be in the observational as evidenced by her work in "Dance Anthem of the 80s" and especially "Genius Next Door." It's true also of the bonus track "Time Is All Around" which, if you caught her live in 2007, you probably already know ("Leaves become most beautiful when they're about to die . . .") "The Sword & The Pen" is okay but nothing to make me rush over to iTunes to download a third 'bonus' track ("Riot Gear").

That's in part because I always thought "bonus" meant free. "You bought the album? Oh, great and here's a free poster as a bonus." It's also because I've heard too many horror stories since April of people being repeatedly charged for the same download at iTunes -- in one instance, someone was charged 24 times in the same day -- and I've heard how iTunes ignores you, sends you an e-mail and tells you the problem must be your bank, then refuses to reply to repeated e-mails where you outline that your bank has told you, "No, the problem is iTunes chaged for this over and over."

Besides, it's not like you need the bonus tracks. I would've agued that "Time Is All Around" should be on the album if I'd been asked. I would've pointed out what a crowd pleaser it was in concert and how it fit with the rest of the album. But you can understand why the thirteen tracks made the album. It's a photo album with each song being a page crammed with photos.

And maybe "dreaming that the antidote was orgasm" ("Genius Next Door") will be you take away or maybe "it's been a long time since before I've been touched, now I'm getting touched all the time" ("Dance Anthem of the 80s") or maybe it will be the melody of "The Calculation"? Or it may be something that hasn't even stood out to me yet because this is a vey rich and textured album.

And it should be the soundtrack of the summer. Download a copy or pick it up in stores.