Kat: Back when I was a little girl -- yeah, we're in the Wayback Machine, here -- my parents threw a party for one of my dad's old friends, Bob, that Dad had served with in Korea. As children will do, I wandered in and out of the noisy party and, rubbing my eyes and yawning, caught the end of it. My father had brought out his guitar and he and Bob were singing "Wake Up, Little Susie."

They were sloshed on cocktails so "Susie" got more than a little slurred in the singing and Dad apparently heard a drummer -- Buddy Rich? -- in his head rushing the beat because the song just got faster and faster as he and Bob sang along. It never reached it's natural end because the two were attempting to 'modernize' the tune by adding what appeared to be a bit of the Twist to it. (Or maybe I'm just in years of denial over the trauma of seeing my father attempt Elvis pelvis thrusts?) Well they sang and twisted right off the patio and into my mother's rose bushes.

So they were hollering over the thorns and bruises and she was in a state over the fact that she'd planted those summers ago and tended to them as if they were her ninth child only to have them assaulted by two drunks and a guitar.

That's a story I never planned on sharing and, when it came to mind, I called my parents to ask how much embarrassment they were willing to suffer for one of my CD reviews? My mother insisted, "You tell that! Those bushes were ruined. Ruined!" My father initially was reluctant but then said it could be retold if I "clarified" that he would never sing the Everly Brothers and it must have been a Buddy Holly or Fats Domino song that I was just remembering wrong (me, my seven brothers and sisters, my mother, two neighbors . . . Yeah, we're all wrong, Pops) and, most importantly, the rose bushes died because "the drunken fool down the street pissed on them at the party." So having included my father's qualifiers, let me explain why that memory is the one that elected to lodge in my brain today: John Fogerty has a new album out. 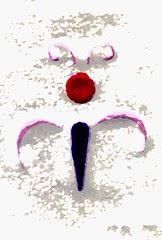 John Forgerty's Deja Vu (All Over Again) came out shortly before I started reviewing albums here so I never weighed in. I told myself, "Next time." The next one, Revival, was interesting but just didn't have, for me, a review in it. So when I found Fogerty's The Blue Ridge Rangers Rides Again at C.I.'s, I opened it excitedly and plopped it into the stereo.

Well at least it excited me initially.

The album, which is released at the end of the month by Verve, will probably please the Fogerty Followers but I'm not sure anyone new will be coming along for the ride.

If they do, they'll have that sense of Is-that-my-drunken-dad-and-his-friend-embarrassing-themselves-while-singing-Wake-Up-Little-Susie? as they listen to the final track, also an Everly Brothers' song, "When Will I Be Loved?"

Yes, Linda Ronstadt does pretty much own that song now. No, not even the original by the Everly Brothers can match what she brought to the song. But, as a minor track on the album, some might be willing to indulge John Forgerty. Sadly, it's not a minor track.

He's joined by The Boss. You know, Jesus of New Jersey, Bruce Springsteen Himself. Yeah, Him.

And in 1985, that might have meant something to music consumers. Today, it really just means something to aging rock critics who are male or male-identified. Tunnel of Love was a long, long time ago and this year's Working On A Dream really underscored that point. As I noted then, Bruce lost his breath control. If they make a Friends movie and need a goofy, old man next-door-neighbor, Bruce could play Mr. Wheezy. You realize that if you listen closely to the 'boys' on their duet.

"When Will I Be Loved?"? There's something hysterical about Bruce, the man who's received far too much critical love, attempting to pull that one off. So you've got two on-the-edges-of-middle-age-or-maybe-in-their-golden-years males whining to one another, strutting around playing the victim. And let's grasp that for a moment: Only a really thick headed fool would strut while playing the victim. I mean, come on.

It is an embarrassment and, even as I type this, I can imagine the 'critical' reaction from all the Male Boomers being "Wow! I love this duet! It really sounds like they're in love! Er, I mean cooking! They're cooking!" Well anyone can cook -- that doesn't mean they ever produce anything appetizing.

But if you can indulge the duo's self-indulgence -- or maybe just ignore this last track on the album -- what else you got?

You've got an album of mind blowing numbness. It's as though it's the Fourth of July, you gathered the whole family, and every thing you light up -- even the sparklers -- fizzles out.

The self-indulgence of "When Will I Be Loved?" may be matched when John decides to sing "Garden Party" (joined by Eagles Don Henley and Timothy B. Schmit). The Rick Nelson penned song was a long whine from a faded teeny bop of how no one wanted to see his deep side. It was plastic soul but, goodness knows, Ricky Nelson had a right to sing it. John Forgerty?

Self-indulgence really is the theme of this album. That's obvious when you notice he's packed in his own "Change in the Weather" with the rest of these 'gems' he considers must-cover songs.

These songs are bulls**t and one long embarrassment. I was wondering how I was going to say it nicely but there's no pointing in teasing it out, let's just serve it straight up: The Blue Ridge Rangers Ride Again is self-indulgent crap that never should have been recorded but, once recorded, should have been a free CD given away with purchase of each pair of tan loafers at Payless Shoes. With or without tassles.

As track five keys up, you're thinking, "John Denver? WTF?"

But Judy Collins is actually the telling comparison.

The (bad) Denver song is "Back Home Again" and, as you listen appalled, you may wonder, "Why the hell didn't he just cover Carole King's 'Home Again'?"

Like an acid flashback, it's all coming back and faster than you can handle. You're remembering Fogerty's sexist and racist statements following Tina Turner's Private Dancer triumph. You're remembering how he's saying he's performing "Proud Mary" again because this rock star or that rock star (all male and it changes depending upon which outlet Fogerty was speaking to) told him he couldn't let that Black woman steal his song. In some outlets, "Black" is not the word he used for Tina's race, for example, "____ told me, 'That colored girl is stealing your song!'" And as offensive as "colored" was in the late 80s, there were more offensive terms in other outlets. Consistent was the "girl" to describe an over forty woman dismissively and equally consistent was the verb which was "stealing" or "stole" depending on the outlet. And if you do remember all Foregerty's embarrassing statements, you may also remember the petty nature of it all, his attacks on Tina. In the 1980s, Tina wasn't making "Proud Mary" her own, she'd done that a decade prior.

And as you think about that, you notice how the songs on Fogerty's new album are all written by men. (One is co-written by a woman who never got anywhere but got a ton of ink for her drunken brawling.) And you notice that he's covering Buck Owens.

Buck Owens? A step up from the "Country Roads" boy?

That's what we've come to as a country? Rediscovering the 'greatness' of John Denver?

I tossed out Judy Collins earlier, remember? I've about had it with her and her now three collections of "Let's Hear It For The Boy!" Three albums devoted to male songwriters and Judy Let-Me-Pretend-I'm-A-Feminist Collins can't do one damn album honoring female songwriters?
Judy's only lasting hits are the two Joni Mitchell covers, let's get honest. "Send In The Clowns" is drama that long ago dated (and Barbra Streisand proved that when her understated version replaced Judy's as the definitive version of the song).

And here comes little Johnny Fogerty of Creedence Clearwater Revival, the squarest of all sixties groups, a fellow who used to be aware of the immense riches of Joni Mitchell's songs. He'd praise them in interviews back in the day.

But when it's time to record, for your Johnny or Judy, these tired wheezing fractions of their former selves beg you to pull the plug as they make clear that they will trot out the very weak and meager talents of John Denver before they'll do a damn thing to acknowledge Joni Mitchell, Carole King, Carly Simon, Laura Nyro, Holly Near, Tracy Chapman, Jackie DeShannon, Bonnie Raitt, Aimee Mann, Janis Ian, Patti Smith, Dolly Parton, Ani DiFranco, Stevie Nicks, or any of the other women whose songwriting left a mark.

Where do you go after John Denver?

That really is the bottom of the barrel. I mentioned that to friends and Dak-Ho suggested, "Sonny Bono?"

Sonny Bono could rock it. He's several leagues ahead of John Denver. John Denver represents the death of rock. A lot of racism went into the Back-to-the-Country movement that found so many rockers of the sixties suddenly Whiting-out the rhythm & blues that made rock. And none was Whiter than John "Thank God, I'm A Country Boy" Denver.

And that's the sort of crap John Fogerty serves up today. He'd rather honor the minuscule 'talents' of John Denver than admit for one moment that the rock era includes women or non-Whites. Listening to the album, you get the feeling that the worst nightmare for John is dreaming he's at Woodstock during Sly and the Family Stone's set.

I'm sure the Male Babyboom critics will do their usual lunatic ravings. It's the racist and sexist crap they eat up. And they rarely turn on their own. They'll find an excuse to applaud it. For instance, they'll insist it's the way it is because it's John's "country album." Really? Don't see or hear no Emmylou Harris. And wasn't aware that Bruce Springsteen was a country & western great. Takes more than tossing out popster John Denver name checking rustic items to make a country abum. Make no mistake, this is just another case of White flight.