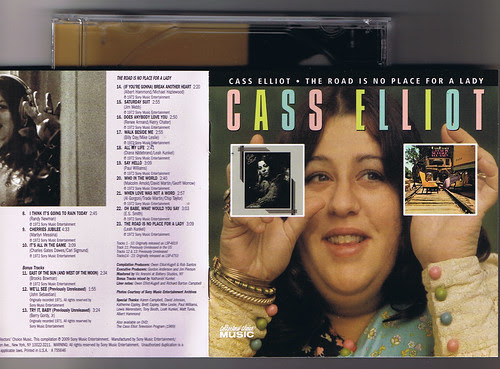 If you're a Cass fan, I am, you know one of the big problems with the last section of her career. "Disney Girls." It's one of the most archaic songs she's ever recorded, a real throw back. Mama Cass extolling the virtues of Patti Page? The US is waist deep in the big muddy (Vietnam) and Cass is singing that she's rejecting reality for "fantasy" and skipping through the house saying good morning to her parents? The song is part of the reactionary period the Beach Boys became mired in as the seventies dawned (a period they never left) and, no surprise, the song's written by B-Boy Bruce Johnson. It's not that Cass recorded a bad song, it's that she recorded it amazingly well. When it's included on any collected best-of, the song stands out as among her finest performances. And Mama Cass? From Mama Cass, it's just the last lyrics you'd want to hear from her.

Which is why "I'll Be Home" is such a wonderful surprise. That track and all the rest from Cass' Cass Elliot album feature the same (and stronger) level of interpretation. It's not just "Disney Girls," it's all the tracks on the album which has been remastered and released with The Road Is No Place For A Lady on one CD (I believe the title is Cass Elliot/The Road Is No Place For A Lady).

Cass Elliot is a masterpiece. That's the only term to apply. But let's back up a bit.

For those late to the party -- boy, did you miss a feast! -- Cass first came to fame as one of the Mamas and the Papas -- the sixties super group also featuring Mama Michelle Phillips, Papa Denny Doherty and Papa John Phillips. The four amazing members gave us "California Dreamin'," "Monday Monday," "Too Late," "Safe In My Garden," "Dedicated To The One I Love," "Got A Feelin'," "I Saw Her Again Last Night," "Creeque Alley," "String Man" and so much more. One of the best known songs, from The Papas & The Mamas, is "Dream A Little Dream Of Me." It was released as Cass with the Mamas and the Papas and begins the solo career of Cass.

Back in 2005, I reviewed The Complete Cass Elliot Solo Collection 1968-71. That amazing, 38-track, double-disc collection pulled together all of Cass' recordings (including unreleased tracks) for ABC-Dunhill. Dunhill had been the Mamas and the Papas label and when Cass went solo, she was forced to stay with "Dunhill" (by that time, Dunhill was no more, absorbed into ABC which never cared for the Mamas and the Papas and would sue them in the seventies -- after Cass signs with RCA -- to force them back into the studios for one more album, People Like Us). That double disc set went a long way towards re-introducing the world to Cass' amazing gifts. She remains among the finest singers to ever grace this country. A list of the top twenty singers of the 20th century wouldn't be complete if it didn't include Cass.

The set included "Different" which Cass recorded for a children's movie and which captures the essential Cass message in a way "Disney Girls" never can (yes, I truly hate the lyrics to "Disney Girls"). It includes many gems -- an overabundance of them. So when a friend/ex-boyfriend asked me last week if I was reviewing anything new lately (we bumped into one another at a wedding on Friday) and I said Cass Elliot and he responded, "More bubble gum," I responded by tossing my drink in his face. (Well, for that remark and for sleeping around on me before we broke up. He more than had it coming.)

The bubble gum label to Cass' solo work sticks like . . . well, bubble gum. But it's really not true. Listen to the double disc of her first solo recordings. Yes, there's Barry Mann and Cynthia Weil's "It's Getting Better" and "Make Your Own Kind of Music." Both are strong songs and successful singles but they're really not representative of what Cass was doing on her albums. "Make Your Own Kind of Music" wasn't even originally on her second solo album, Bubble Gum, Lemonade And . . . Something For Mama -- it was added after the album was released and the re-release was retitled Make Your Own Kind Of Music. In part due to the cheapness of ABC-Dunhill but that's another story. Those ABC-Dunhill albums featured songs like "Burn Your Hatred," Leonard Cohen's "You Know Who I Am," Laura Nyro's "He's a Runner," John Sebastian's "The Room Nobody Lives In," and much more. These are not bubble gum albums. (And Mann and Weil's "New World Coming" is probably the finest composition Cass recorded by them and one that underscores the songwriting duo's strong social conscience.)

The double disc collection went a long way towards restoring the artistry of Cass because collections like Mama's Big Ones have long been in print and long given the impression that they were all Cass was capable of. If that's all she was capable of, that would have been a great deal. But on the albums those singles come from, the songs exist to round out a total mood. Offered as the only evidence of Cass' solo recordings, the tracks brought to mind Holland Taylor's dismissive comment of a man at the bar in Romancing the Stone: "Too happy."

So Cass leaves ABC-Dunhill, records an album with Dave Mason (Dave Mason & Cass Elliot) and begins her RCA career. And it's the RCA career that Cass Elliot/The Road Is No Place For A Lady document. Those are the two studio albums Cass recorded for the label. Unlike her live album, Don't Call Me Mama Anymore, also the soundtrack to her 1973 TV special, these have not been on the shelves of your local music store. RCA (or whomever owns/absorbed the conglomerate now) has kept the live album in print. The new re-issue comes via Collector's Choice which is affiliated with Sony.

Let's leave Cass for a moment. What the re-issue does is really underscore what a strong songwriter Leah Kunkle is. Leah is Cass' younger sister and, throughout Cass' solo career, some of the finest songs she recorded were written or co-written by her sister. "What Was I Thinking Of?" (Dream A Little Dream), "Who's To Blame?" (Bubble Gum, Lemonade And . . . Something For Mama) appeared on the ABC-Dunhill albums, "When It Doesn't Work Out" (Cass Elliot), "All My Life" (The Road Is No Place For A Lady, co-written by Kunkel with Diana Hildebrand) and the amazing title track of The Road Is No Place For A Lady attest to Leah's own artistry. Cass was more than happy to highlight her sister's talents and this re-issue was overseen by Owen Elliot-Kugell, Cass' daughter, which really continues that family's strong tradition of celebrating each other's accomplishments.

Toni and I listened together to the album on Sunday and she was all over the liner notes which include an essay by Owen. She told me, "Owen's the anti-Christina Crawford." We laughed and then marveled over the time and effort Cass' daughter has put into maintaining and restoring her mother's legacy. It's quite an accomplishment.

And now I'm about to totally piss on all that. My apologies to Owen.

The Road Is No Place For A Lady is probably a wonderful album. If you order the reissue (I recommend you do), then listen to it first.

Well, I warned you.

Where is the American singer's Dusty In Memphis?

Dusty Springfield's 1969 album is one of the great interpretive works of the rock era and a classic. The British songbird traveled to America and recorded the once-in-a-lifetime masterpiece.

Cass went to Sunset Blvd for her self-titled masterpiece.

And that's what Cass Elliot is.

"Disney Girls" appears on the album. It's the song you know from the collections and it's the one you curse because Cass has poured so much into it. She's taking her vocals to a place where they're so vulnerable that she always seems about to either go off key or lose it because the emotions are so raw and intense. It's an amazing vocal performance.

And the great news is Cass pursues that for every track on her RCA debut.

Judee Sill's "Jesus Was A Crossmaker" has been recorded by many including Sill herself but Cass' has a confidence and authority with it no others have gotten across. That lead vocal is all the more amazing when you grasp the gentle backing vocals are also provided by Cass. She does similar magic with Randy Newman's "I Think It's Going To Rain Today" which, bad news for Judy Collins, should be the definitive version for anyone who hears it. (Collins recorded the song for her album In My Life.)

Bobby Darrin's "I'll Be There" finds new life as well as Cass layers so much love on it. "Love" is the word for it.

"Oh I tried to stay away from you," Cass sings on Leah's "When It Doesn't Work Out" and what you notice is how much Cass is working her upper register and how delicately. Cass could belt with the best of them. Listening to Cass Elliott, you really see the culmination of an artistic odyssey she began on ABC-Dunhill. It's there in Leah's song as she asks, "Isn't love terrible when it doesn't work oooUUUUUUOOOOOUUUUUTTTTT." She's mastering dynamics in a way that classical pianists often do but few singers ever come close to.

There's no question that Cass could interpret a song and reward the listener with riches. That's why she remains the legend all this time later. But it's on Cass Elliot that the master really struts her stuff. Like Dusty In Memphis, this album is a masterpiece and a standard bearer for any vocalist.

I'm short changing The Road Is No Place For A Lady. I know I am, I freely admit it. But nothing Dusty ever did approached the genius of Dusty In Memphis. It's a once-in-a-lifetime bit of magic. Cass Elliot is the same way. As a Cass fan, even I wasn't prepared for it.

Cass Elliot should be on the list of best rock albums right next to Dusty In Memphis and the other admitted classics because that's what it is. You'll marvel over "Cherries Jubilee," you'll marvel over it all.

But to do that, you'll need to buy the disc. For some reason, this reissue is not available as a download. That's a real shame because I'd hate to see it resurface as one in a decade and have people again wondering why this classic was buried?