Kat's Korner: Get Under The Covers

Kat: Okay, I download like crazy these days. In fact, I tend to get a little pissy when someone's latest requires me to hunt down a store that has it. For example, Holly Near's We Came To Sing with emma's revolution -- e-mails coming in asking about if it's going to be available as a download? (Answer at the end of review.) I understand the need for downloads and that they go far beyond the I MUST HAVE IT NOW! impulse. We're on the road every week speaking out against the Iraq War and, coming back to the hotel room at night, easiest thing in the world is to discover, is to download a new album. Hardest thing in the world? Hunting down a music store? Near impossible. Now I can stand in the middle of most cities and towns, toss an eyelash wand and hit a Wal-Mart but Wal-Mart's usually not going to have the music I listen to. So download's are really important and I don't deny it.


That said, I do wonder what all the new technology means in terms of the relationship of music with listeners? For example, with iPod and shuffle and program is there really a need for a radio? I, for one, can't imagine my girlhood (among the outlaws, as Maria McKee once sang) without my radio. That rush when a great song I'd never heard popped up or one that I'd loved was finally played.

The ideal radio experience. The fantasized one. That cuts out the 15 minutes of traffic reports, the 30 or so minutes of commercials and pretends we got a steady stream of jams. The ideal rarely happened, but when I look back, that's how I tend to see it, my mind editing out all the weak and belabored moments and jump-cutting to the legendary bits like Jimi Hendrix' "Foxy Lady" or Stevie Nicks dragging Fleetwood Mac to the heavens with "Sara." In my mind, I remember all the greats being played and tend to forget the duds that also made it into heavy rotation like "Big Country." 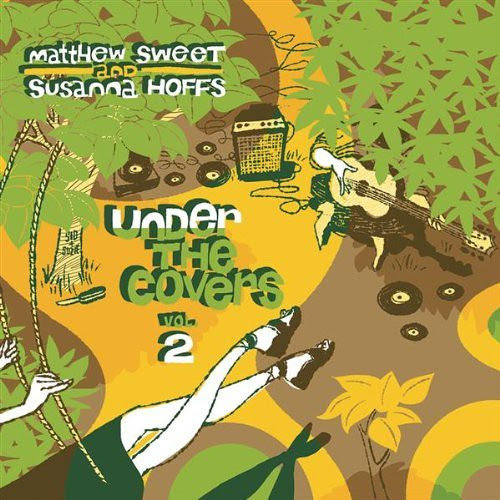 The ideal radio experience is now available in album form: Under the Covers Vol. 2. (And it's downloadable at Amazon.com, click here.) Matthew Sweet (of "Girlfriend" fame) and Susanna Hoffs (Bangles) reteam for a follow-up to 2006's Under the Covers Vol. 1. That earlier collection was solid but primarily worth noting for Susanna Hoffs amazing vocal on "Different Drum" -- a performance that rivals Linda Ronstadt's version with the Stone Poneys and one with a YouTube clip that's been viewed nearly 100,000 times. A staggering number when you grasp that (a) there are other YouTube clips of Hoffs and Sweet performing the song and (b) the song received very little radio airplay.

That Susanna Hoffs is such an amazing vocalist shouldn't have been a shocker. From the first Bangles album for Columbia (All Over The Place), Susanna was making her mark vocally with "Hero Takes A Fall" and "Dover Beach" (both written with bandmate Vicki Peterson) and it's the voice Prince fell in love and wrote "Manic Monday" (the Bangles first big hit) for. It's the voice radio saturated with "If She Knew What She Wants," "Eternal Flame" and "In Your Room." It's the voice that was a natural for backing vocals when Ronnie Spector looked around and saw everyone else was having an eighties comeback and wondered, "Why not me too?" Susanna's vibrato owes a debt to Ronnie but she's got notes Ronnie never dreamed of. A gig on a 90s Lilith Fair tour got some strong attention as Susanna presented songs like "Eternal Flame" in an acoustic setting. But even a 2003 reunion of the Bangles didn't seem to really let her shine.

So for those of us with any past Hoffs history, there's no way that Under the Covers Vol. 1 was going to be seen as anything other than the album that gave Susanna the chance to shine in a recording the way she always had live.

Take a straight and stronger course

To the corner of your life

She hasn't got time to make you a wife

She nails the 1971 Yes classic (written by Jon Anderson). But what you notice as much as Susanna's amazing rock vocal is the amazing band sound Hoffs and Sweet's little basement project has developed. That's Matthew on guitars and bass, Susanna on guitars, Ric Menck on drums, Greg Leisz on guitar and guests on some tracks (Yes' Steve Howe plays on "I've Seen All Good People").

The first album -- exploring the sixties and early seventies -- seemed more of a nice idea that sometimes achieved. This album never falters. It's that perfect hour of radio you have in your mind (and it's more than sixty minutes if you go with the deluxe edition). And that's because they've become a band. It may be a side project, it may be a lark, but they've got the element, the spark, that's either there or it isn't. Fleetwood Mac had it in 1975, Nirvana certainly had in 1991 . . . And although I could list many examples from before 1999, it's really hard to think of an example this decade. The Disney Kids demanded that the focus was on pretty faces and egos demanded that the focus was on individual pretty faces. I'm hard pressed to think of a worse decade for bands. And the few who actually have talent can't seem to break through. Think about and find the decade in rock history where bands aren't dominant forces on the charts?

The sixties? Beatles, Stones, Who, the Mamas and the Papas, the Kinks, the Doors, the Beach Boys, Sly & the Family Stone . . . The seventies? The Mac, the Eagles, the Commodores, Earth, Wind & Fire, the Doobie Brothers . . . The eighties? R.E.M., 10,000 Maniacs, Pretenders, Eurythmics, U2, Tom Petty & the Heartbreakers, . . . The nineties? Nirvana, Soundgarden, Rage Against The Machine, the Cranberries, Smashing Pumpkins, the Breeders, . . . This decade?

Which is one more reason The Matthew Sweet and Susanna Hoffs Experience (hey, they need a band name) is really something to get excited about. These aren't Muzak covers or attempts to get on VH1. They burn these songs with energies. As one listen to "Couldn't I Just Tell You" will demonstrate.

That song's written by one of Trina's favorites, Todd Rundgren who is also represented as a songwriter on their cover of "Hello It's Me." Under the Covers Vol. 2 has picked some of the seventies finest writers to re-interpret: Rundgren, John Lennon, Carly Simon, George Harrison, David Bowie, Eric Clapton, Debbie Harry and Chris Stein, Freddie Mercury, Gram Parsons and many others.

So many things will stand out. Ric Menck's solid drumming on "Maggie Mae," Matthew's amazing interpretation of "All The Young Dudes," Dhani Harrison's guitar work on his father George's "Beware Of Darkness" and so much more. But the first question I'm always asked? "Is there a song like 'Different Drum'?" Meaning: Is there a moment where Susanna's vocals just totally shock us and find new meaning in a song you thought you knew? Many times. Bread's "Everything I Own" gets a new life thanks to Susanna and "Willin'" should have those who've never heard of Little Feat seeking the group's back catalogue. But it's a tribute to how strong an album this is and how much the band is cooking that you're just as likely to marvel over the guitar work on "Willin'" as you are over Hoffs' outstanding vocal.

Now I've already given you a download link, that's the album for $9.99 and it's something. But for $14.99 you can get the deluxe edition. Five dollars more gets you ten additional tracks including "Dreaming" (Blondie), "Marquee Moon" (Television -- and Sweet and Hoffs do an amazing job on this one) and the Ramones "I Wanna Be Sedated." I really recommend you kick in the extra five dollars.

At their MySpace page, they note the following upcoming performance dates:

If they're in your area, see them. And buy a CD of the album at a store (online or physical) or download it but don't cheat yourself out of one of the year's finest albums.

Holly Near. I said I'd get back to her. Her album is not available for download at Amazon.com. You can purchase it there . . . but, woops, "This item is not immediately available to ship. (Usually ships within 1 to 3 weeks.)" CD Baby carries it . . . but it's "out of stock." Good for Holly and emma's revolution that there new album is selling but for those who don't already have it, what can you do? You can download it at CD Baby . . . but that apparently has caused problems for some. Dallas advises you can download it via emma's revolution. It's all such a hassle and, thing about Under The Covers Vol. 2, it restores the joy to daily life.