British spy chief: No reason for Iraq War and it increased instability and risks of threats

In London today the Iraq Inquiry continues receiving public testimony. The big witness today is M15 Director General (2002 - 2007) Eliza Manningham-Butler. BBC News notes that she's testified the Iraq War has "substantially" upped the chance of England being a target for terrorism and that the threat assessment wasn't "substantial enough" to merit going to war: "If you are going to go to war, you need to have a pretty high threshold to decide on that." Gordon Rayner (Telegraph of London) quotes her stating, "Our involvement in Iraq radicalised, for want of of a better word, a whole generation of young people -- not a wholel generation, a few among a generation -- who saw our involvement in Iraq and Afghanistan as being an attack on Islam. . . . Arguably we gave Osama bin Laden his Iraqi jihad so that he was able to move into Iraq in a way that he was not before." Miranda Richardson (Sky News) emphasizes the same quote Rayner did and the link has video of Manningham-Buller testifying. Andrew Sparrow (Guardian) is live blogging the testimony. Of the testimony I've seen so far this morning (it's streaming live at the Iraq Inquiry website), the big moments include her assessment that Saddam Hussein was contained and not a threat to England. This was put into writing in 2002.

Meanwhile CNN reports, "The United States has spent more than $1 trillion on wars since the September 11, 2001, terror attacks, a recently released Congressional report says. Adjusting for inflation, the outlays for conflicts in Afghanistan, Iraq and elsewhere around the world make the "war on terrorism" second only to World War II." Despite the wealth wasted on the wars, so many people in the US do with out and that's how you get the poverty draft. Peace Mom Cindy Sheehan (Cindy Sheehan's Soapbox) writes about the poverty draft and proposes a measure she'd like to see introduced in Congress:

Immediately upon the president signing this bill into law, forced military conscription will begin.

The bill will have NO EXEMPTIONS to those who are eligible to the draft and the age limit is 18 to no upper limit. This bill seeks to draft those eligible from both genders and all gender and sexual preferences.

There will be very limited health exemptions as most people can perform a skill that is valuable to the military. As University is now open to all ages and attended by old and young alike, there will be no education exemptions. The draftees can resume or attend college when their stint in the armed forces is up. There will be no GI education benefits extended to the draftees, as they will be members of the wealthy of the US.

Citizens will be drafted in this order in the event of a Constitutionally declared war, or un-constitutionally started war, or any of these euphemisms (but not limited to) for war: police action, entanglement, theater, hostilities, occupation, special operations, interventions, cluster-fu@k, pacifications, war on drugs, peace-keeping, fighting for “freedom and democracy,” etc:

The President and his/her Cabinet and their age appropriate dependents, including spouses. No exemptions as outlined above.

Senators and Congress Members and their age appropriate dependents, including spouses. No exemptions as outlined above.

CEO’s of the Federal Reserve and Banks and their age appropriate dependents, including spouses. No exemptions as outlined above.

CEO’s of any company (including the media) that profit directly or indirectly from war and their age appropriate dependents, including spouses. No exemptions as outlined above.

Any citizen of the United States of America who does not fall into one of the above categories is categorically ineligible for this forced conscription draft.

This bill will also provide college tuition grants to anyone who does not fall into one of the above categories and who wishes to go to college—without having to join the military.

Under the non-profit tent @ the Camden, NJ – Warped Tour - Matthis Chiroux (the Iraq War resister), Jessica, and I embraced the 95 degree weather to set up the World Can’t Wait table and meet young people to bring the We Are Not Your Soldiers Tour to their school, town, or wherever. It was an unbearably hot day, but it was a pretty amazing day, because we talked to hundreds of kids, passed out flyers, and posted flyers around the venue.
Even as we began setting up and decorating our table at 9am, our knee caps were sweating from the heat and humidity. The heat wasn’t going to stop our determination to get our visuals up and out there for everyone to see. Mainly we stood in front of the table with one of our Abu Ghraib images, and passed out the We Are Not Your Soldiers flyers. The Abu Ghraib image along with Matthis’ body signs (he wrote on his stomach - “No U.S. Genocide” and on his back “Soldiers Are Not Heroes”) challenged hundreds of people to stop – look – and comment on the wars in the Middle East. While many people walked by our table and rubbernecked our images - many people stopped in their tracks and either: were totally upset by the image, pissed off by our anti-war position, or agreed and were interested in who we were. A number of young women, either in high school or younger, were taken aback by the Abu Ghraib image and just asked with their mouths open where these images came from. A bunch of people would walk by Matthis and say “that sign is not cool.” And even one asshole had the nerve to tell me that he didn’t care about the Abu Ghraib prisoner. While these people were in the minority, they were vocal about their disagreements. While others were the complete opposite they were drawn by our poster and our table and were interested in talking about Obama, Afghanistan, or the tour. A couple of people thanked us for being out at Warped Tour. Also, we learned that many of the kids that signed our list were from small towns. It wasn’t just youth that stopped by our table, there were many people of different ages some people were in their twenties and others were parents accompanying their parents.


Turning to another topic, the cover that Ms. will never, ever live down. 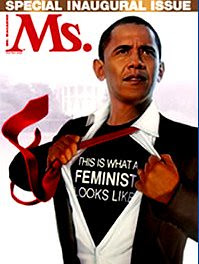 They can take comfort in the fact that more people probably remember Naomi Wolf's apparently drug-enhanced (induced?) babbles on CNN about what a feminist Barack was. Lina Thorne (World Can't Wait) breaks down reality:


On July 15, the news broke that the Obama administration included a ban on abortion coverage that basically meets the notorious Stupak restrictions that had been the focus of attention months ago within the health care reform debates.
This means that the compromise that was satisfactory enough to the anti-abortion Democrats months ago to push through the "reform" has been surpassed with this measure; leaving many pro-choice activists asking "why did he do that? he didn't have to!"
Here's the answer, women, short and sweet: Obama is not your friend, advocate, or representative.