Robert Moran (Philadelphia Inquirer) reports that Jamal M. Rhett's body arrives at Dover Air Force Base today after the 24-year-old died while serving in Iraq: "As of Monday night, the Department of Defense has not released information about how or when Rhett died." Why hasn't DoD released any information?

Let's review. USF-I (formely MNF-I) releases the news that a service member has died in Iraq. DoD? As the USF-I announcements always note: "The names of service members are announced through the U.S. Department of Defense official website at http://www.defenselink.mil/releases/. The announcements are made on the Web site no earlier than 24 hours after notification of the service member's primary next of kin."

Okay, it's Tuesday, maybe they haven't been able to reach his next of kin? WPVI Action News reports (link has text and video):

Action News spoke with the mother of Specialist Jamal Rhett.
Her voice straining with emotion, Michelle Watson described the moment on Sunday when two military men came to her door to tell her that her son, 24-year old combat medic Jamal Rhett, had died in a roadside bombing in Iraq.
"Before they got to the door I knew it wasn't good," Watson said. "I just kept saying, 'No, no, no, no, no.'"

So why hasn't DoD released info? 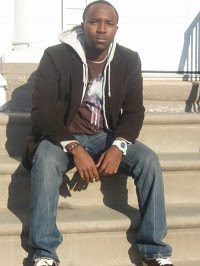 That's Jamal Rhett from his Facebook page. He was serving his second tour in Iraq when he was killed.

It's interesting how we don't seem to have an accurate count on the fallen in Iraq anymore but no one's supposed to notice. The US military announces 2 deaths and only Reuters reports the announcement. Then the announcement vanishes with no explanation. That's USF-I. Now DoD's got a problem as well. We're talking press releases. They aren't that difficult to issue. It's amazing how much an administration can get away with when the media cares so damn little.

The Daily Jot
THIS JUST IN! DIVA MELTDOWN!
1 hour ago

And Ruth's "Who's suffering?".

World Can't Wait is getting the word out on an upcoming action:

We received this notice from people planning protests with the 3rd Battalion is sent to Iraq next week. Some of you may have heard about this upcoming action during the webcast we did a couple weeks ago.
This is a nation-wide call to action! Come to Fort Hood, Texas, Aug. 22 to participate in peaceful actions with veterans and anti-war leaders opposing the deployment of the 3rd Armored Cavalry Regiment's 5,000 Soldiers to Iraq. This is your invite. Can you attend?
Despite President Obama's fallacious claims that the war in Iraq is winding down, the 3rd ACR is gearing up for yet another deployment! Furthermore, many Soldiers facing deployment are known to be unfit for combat due to injuries sustained in prior tours. The Peace Movement must not let this stand!
The Soldiers of the 3rd ACR and the people of Iraq need you to be here Aug. 22. This will be a RADICAL demonstration, with optional direct action elements and possible legal implications. While all are welcome to participate at whatever level they are comfortable, we value greatly those willing to put their bodies on the line.

And, from England's Stop The War, we'll note this from Robin Beste's "All Neptune's oceans could not wash the blood from Blair's hands:"

Will all great Neptune's ocean wash this blood clean from my hands? asks the mass murderer Macbeth in Shakespeare's play.

Tony Blair clearly thinks that by donating the millions he is being paid for his memoirs to the British Legion he will wash his hands clean of the hundreds of thousands of civilians and the 179 British soldiers killed as a result of war in Iraq.

It won't stop Peter Brierley, whose son was killed in Iraq, who says his aim is still; "that one day we will see Tony Blair in court for the crimes he committed. Peter famously refused to shake Blair's hand at a memorial service for soldiers who died in Iraq, saying, "Don't you dare. "You have my son's blood on your hands."

Rose Gentle, whose 19-year-old son, Fusilier Gordon Gentle, was killed in Basra in 2004, said she was pleased injured troops would benefit but said it would not change the way she felt about Blair. "It is OK doing this now but it was decisions Blair made when he was prime minister that got us into this situation. I still hold him responsible for the death of my son."

The money Blair is donating from his memoirs will be welcome for those soldiers it helps who have been seriously injured in Britain's wars.

But no amount of money can buy Blair innocence or forgiveness for the series of lies he told against the best legal advice which told him the war was illegal under international law, or for his defiance of the vast majority of people in Britain, who protested in unprecedented numbers to tell Blair that his warmongering was "not in our name".

And before anyone gets duped by the "generosity" of Blair's donation, we need to recall how shamelessly he has exploited the contacts he made from his war crimes.