Tony Blair is set for fresh embarrassment over the Iraq war this week when he is cross-examined about contradictions relating to the manipulation of intelligence before the invasion.
[. . .]
Sources say Blair's previous testimony appears to differ from some given in private by other witnesses, thought to include the former chairman of the joint intelligence committee, Sir John Scarlett.
Evidence previously offered in camera will now be made public and it is believed that conflicting claims made by Scarlett and Blair will be central to the latter's public grilling this week.

The above is from Mark Townsend's "Blair faces fresh questions on Iraq evidence" (Guardian) and the Iraq Inquiry might be taken more seriously were it not for the WikiLeaks revelation that the British government told the White House that they'd ensure the US wasn't embarrassed by the revelations. Add in that Tony Blair played the committee for fools last January and what needs to be proven on Friday is that the Inquiry is truly independent. If you're late to the Iraq Inquiry, the Guardian has a tongue-in-cheek overview here. 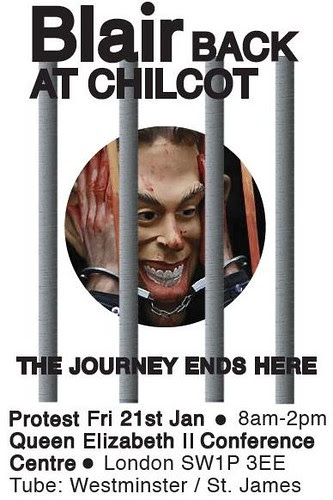 Reasons to protest when Tony Blair is recalled to give evidence to the Iraq Inquiry on 21 January:

Please publicise as widely as you can

Brian Brady (Independent of London) adds, "Members of the five-strong Chilcot inquiry have grave doubts over the truthfulness of statements the former prime minister made to them last January and in his memoirs, published last autumn. The Independent on Sunday understands that the inquiry is concerned over Mr Blair's evidence on the legal advice he received before agreeing to join the invasion, and the timing of the decision to go to war. He also faces claims that he misrepresented the findings of a report from international inspectors sent into Iraq following the invasion to look for evidence that Saddam Hussein had been building an arsenal of weapons of mass destruction (WMD)." Again, the body with something to prove this Friday is the Inquiry itself.

Last Sunday, the number of US military people killed in the Iraq War since the start of the illegal war was 4435. Tonight? PDF format warning, DoD lists the the number of Americans killed serving in Iraq at 4435. They'll update Monday morning -- around ten a.m. EST -- to note the three deaths over the weekend. WJBD identifies one of the fallen as "23-year-old Sergeant Michael Bartley of Barnhill". WSIL has a video report here.

In other violence, Reuters notes a Baghdad roadside bombing injured two guards of a Science and Technology Ministry official, a second Baghdad roadside bombing injured two more people and, dropping back to yesterday, two people were injured in Kirkuk by "celebatory gunfire". Margaret Griffis (Antiwar.com) adds, "Christian Iraqis are flooding into Istanbul, fleeing more potential attacks against them in Iraq. Among them are minor children sent by parents who could not afford relocating their entire families. For some, Turkey is just a stopover on their way to Europe or North America."

Michael Lyons, a 24-year old Royal Navy medic, is the latest member of the armed forces to officially object to the horror of the Afghan war.

“When I got the order to go to Afghanistan I thought, ‘I’ll go and do my job as a medic.’

“But a submarine medic who has been to Afghanistan told me and a friend that the majority of the war casualties he saw were civilians—and most of those were children.

“I decided to read up on the given reasons for going into Afghanistan in the first place.

“They say we’re there for the good of the Afghans—but if they’re the casualties, how can that be true?”

Michael has had his application and appeal to be recognised as a conscientious objector dismissed by the navy. He is looking to the secretary of state to overturn the decision.

He also faces a court martial after his senior officers accused him of wilful disobedience because he felt unable to take part in a rifle course to prepare him for Afghanistan.

Michael said, “I feel like Fleet Legal, who deal with internal navy law, are out to get me. There haven’t been many conscientious objectors in the navy but I’m proud of what I’ve done.”