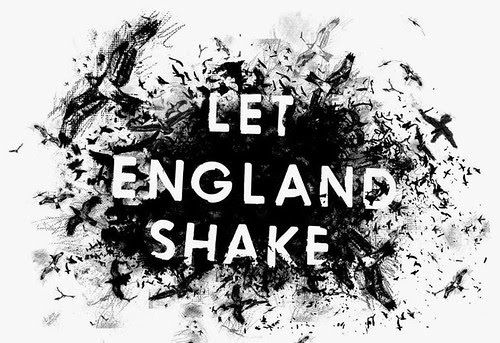 Let England Shake is a poetic image of our world and a poetic portent of where this world may lead if the war marching continues. If you doubt that, listen to the opening lines to the second song. And after that, note where PJ chooses to root herself, quickly moving from man-made alleys to the Thames River, the moon, the sky, the ocean, that which was not made by humans. A bugle proclaims "Reveille" as the third track begins and the chase is on, PJ tells us, as our country ("Oh, America, Oh, England") "is ploughed by tanks and feet." That's the reality about "The Glorious Land," PJ informs us over ringing, swirling guitars.

This is followed with the hand clapping, drum thumping "The Words That Maketh Murder." Your only four songs in but it's already feeling like the album of the year, the artistic statement to top -- the way Joanna Newsom's Have One On Me set the standard for 2010. And for those who worry PJ's preaching and forgetting the rocking, she's rocking. In fact, "The Words That Maketh Murder" is downright infectious what with the backing vocals and hand clapping. And, if you think about it, that might be the very point of the song, how infections this War Talk can be. (And am I the only one hearing "Summertime Blues" here?)

As much as this is her political album, it's also the one where she notes her roots. I'm not referring to the musical figure in "On Battleship Hill" which reminds me both of the last bars from Heart's "What About Love?" and "I Dropped My Dolly In The Dirt." If you never before grasped how Polly Jean shares so much DNA with Jim Morrison and Grace Slick that they have to at least be her karmic parents, check out "All And Everyone" which is haunted, rocking and the kind of perfection U2's always striving for in their rock anthems (without ever quite getting there).


And PJ's in on the same dirty secret Grace and Jim used to whisper: Rock's about dancing. Let England Shake is an album to rock out to, to dance to, to twirl around the room to. In fact, throw your hands up in the air and start swaying during "Hanging In The Wire" ("There are no trees to sing from, Walker cannot hear the wind"). The whole album's infectious on first listen. So much so that it may take a tired night, coming down from drinking (or more) to accidentally catch on to the meanings of some of the songs you think, on first listen, you already understand.

What PJ understands is that the wars -- whether it's the current ones or Gallipoli -- are the same war for the same things with the same consequences. What PJ understands is how to convey so much meaning with her voice, listen to her shade and shape notes on "In The Dark Places" and be yet again blown away by that one-of-a-kind singer.


Let England Shake is available for pre-order on iTunes (bonus track if you pre-order is "The Big Guns Called Me Back Again") and the album drops Tuesday. Years ago on her break through, PJ was trying to bring you her love, this time she brings you her all -- you don't want to miss that. She's made music a religious experience, so get your ass into her church and sit down on the pews already.