Ruth: The plan is for C.I. to post later this morning. She is out of the hospital -- apparently more difficult than planned -- and they had to rush to make the hearing that is going on right now. I was on the phone with Kat as they were about to leave the hospital and said I would find some topic to do a Ruth's Report on so there would be some new content until after the hearing. 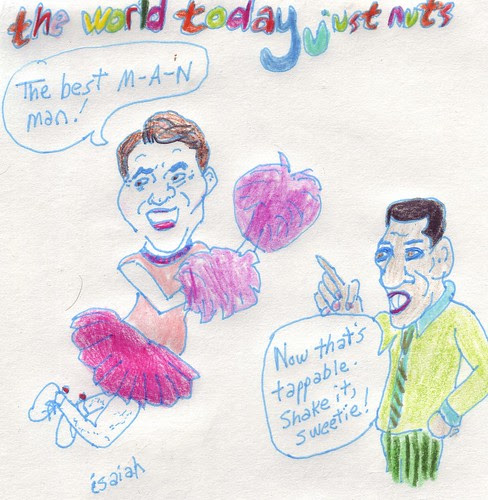 The great fraud is in the news cycle today.

CBS News tell us, "The Justice Department is set to indict former presidential candidate John Edwards on charges that he violated campaign finance laws trying to cover up an extramarital affair during the last presidential campaign, according to multiple reports." ABC News adds, "The United States Department of Justice has green-lighted the prosecution of former presidential candidate John Edwards for alleged violations of campaign laws while he tried to cover up an extra-marital affair, ABC News has learned." The ABC link also has a video report by Bob Woodruff.

So what is this all about for those who have forgotten or missed it in 2008?

John Edwards cheated on his wife many times. Or had multiple affairs. That might be the way to put since Elizabeth Edwards was aware of the affairs going back to at least 2003. Rielle Hunter is the well known affair. It is alleged that money was used to cover up the affair, including campaign money. To cover up the affair and the child it produced.

Mr. Edwards used his associated Andrew Young to further cover it up. Mr. Young was told (and did) to claim Ms. Hunter's baby as his own. Mr. Young has written a book and been talking about it at length.

John Edwards could not keep it in his pants.

That is hardly new or novel.

But that he would lie the way he did? Or that he and Elizabeth Edwards would scheme to put one over on the voters?

Ms. Edwards, for those who have forgotten, in the 2008 campaign (2007 and 2008) took a number of swipes at Hillary Clinton over Bill Clinton's past affairs. She was snide, rude, and bitchy.

And she exhibited that behavior while knowing her husband had spent years cheating on her. (As we know in this community, in 2002, John Edwards hit on ___ and ____ went to Elizabeth Edwards and stated she was not donating to his campaign and the reason why. Mr. Edwards either thought he had to whore to get big money donations or he was hitting on everyone by that point.)

When she learned Ms. Hunter was pregnant, Ms. Edwards joined her husband in attempting to knowingly deceive the American public.

Can you imagine if Mr. Edwards had gotten the Democratic Party nomination for president? Or for vice president? And, in August 2008, it had come out that he had not only had an affair but fathered a child? While using his wife's cancer as a campaign strategy?

John Edwards, you may remember, was never able to stand up to Barack Obama (because a former campaign strategist who knew all of Mr. Edwards' secrets ended up working on Mr. Obama's campaign?). He was more than willing to attack Hillary Clinton and did so repeatedly.

And even after he was 'out' of the race (he clearly thought there was a strong chance he would be offered the vice presidential nomination if Mr. Obama got the party's presidential nomination), he continued to show up and undermined Ms. Clinton's campaign. She wins multiple state primaries, for instance, and what does Mr. Edwards do?

As Isaiah's comic documents, Mr. Edwards chooses that moment to endorse Barack Obama. The twoo were always working together against Ms. Clinton.


"I know that it's not possible that this child could be mine," Mr. Edwards insisted when The National Enquirer exposed his visit to Ms. Hunter to see their child. Mr. Edwards knew the child was his.

He is a fraud and a fake.

Were his actions criminal?

If so, I hope he is prosecuted to the fullest extent of the law.