AP reports that jury selection is supposed to start in Houston today in the case Jamie Leigh Jones has brought against Halliburton. Jones was working as a KBR contractor in Iraq when she was gang-raped. When she attempted to address the crime, KBR responded by imprisoning her and it took a member of the US Congress (Rep Ted Poe) sounding alarms to force KRB to release her. After Jamie Leigh Jones came forward, other women began coming forward noting they had been raped, sexually harassed or sexually assaulted while working for KBR - Halliburton.

Despite these activies and more activies, the US government continues to give KBR contracts -- cost-plus contracts despite KBR's accounting 'problems.' Last week, the Commission on Wartime Contracting held a hearing Commission Co-Chair Michael Thibault noted that KBR is still not up to date on their billing paperwork and, as a result, there's been no audit since 2003. The US government has paid KBR - Haliburton millions and millions over the last 8 years and there's no accountability and there's no check on the funds. KBR gets to do whatever it wants, whether it's attempt to cover up rapes or attempts to overcharge the US tax payer. KBR's infamous burn pits have sickened and killed US troops and US contractors -- and contaminated Iraq and harmed who knows how many Iraqis -- but the White House is still signing new contracts with KBR. Of course, if Iraq had a functioning government with a real prime minister, they could ban KBR immediately. They could make it a condition that KBR clean up every burn pit they'd made in the country and pay for the health care and treatment of the Iraqi population effected by the burn pits. If KBR refused, Iraq could forbid the company from operating on its soil.

John Reynolds (Irish Times) reports from Basra on the effects of the Iraq War for Iraqis, specifically with regards to the US military's use of depleted uranium:

Brightness and colour might inspire initial hope in the minds of concerned parents here, but both hospitals still lack vital machines and laboratory equipment needed to provide radiotherapy or to diagnose the numerous conditions that mean up to 10 babies die every day in the Ibn Ghazwan maternity ward.
“We are blind,” says Dr Ahmed Jafer, a paediatric specialist. “Ours is the only neo-natal unit in this region but we cannot quickly diagnose what exactly we are dealing with. Our children are dying from malnutrition, diarrhoea, TB, meningitis, leishmaniasis, chronic liver disease, pneumonia, anaemia and congenital heart disease, all of which are easily preventable outside of Iraq.”
Add to this the high incidence of miscarriages, up to 40 abortions every week, child leukaemia rates that more than doubled here from 1993 to 2007 and the weekly number of tumours and congenital deformities – missing eyes or limbs for example – that children are born with and you only begin to get a sense of the scale of the horror that has been visited on Basra’s children; indeed, on many more across Iraq – since UN sanctions against Saddam Hussein began during the first Gulf War in 1991.
Dr Jafer and his colleagues may be metaphorically blind. But two-year-old Abu Felah Reyal’s blindness – in his right eye, over which an enlarged tumour has developed – is real. He has been undergoing chemotherapy at the Laura Bush hospital, many of whose patients are from Missan City, Zubair and Nasariyeh, which are south of Basra, near the border with Kuwait.

In Sunday's "Editorial: All the news that's fit to conceal" for Third, we noted that the attack Friday on the activists in Tahrir Square wasn't covered by the networks despite footage of the attack which aired on Al Jazeera Arabic. An angry e-mail insists there was no attack and that we've made it up. We're not the only ones noting the attack. But if you need documentation here are two screen snaps. 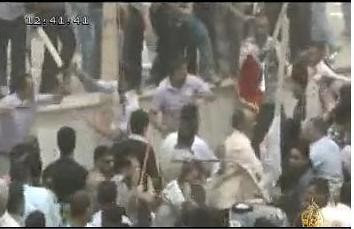 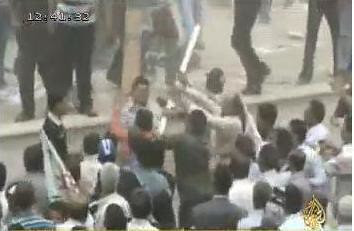 I was going to ignore the e-mail (I know the angry person e-mailing will not be convinced even with visual proof) but while reviewing The Great Iraqi Revolution this morning, I see that they have posted video of that Al Jazeera report -- click here to stream it. The Great Iraqi Revolution today makes clear that Ayad Allawi does not speak for them and "we do not belong to any of the past or present political parties." And, "We demand an explanation of the Behadla Tribes about whether any of their members joined the mission who came to attack the Youth in Tahrir, Baghdad, particularly since we know of their honourable role in the 1920 revolution and others the last of which was a couple of weeks ago when one of their Shaikhs shouted at the Governor of Nassiriya, Talib Al Hassan."


Bonnie reminds that Isaiah's The World Today Just Nuts "The Campaign Begins In Earnest" went up last night. Today on Law and Disorder Radio (begins broadcasting at 9:00 am EST on WBAI and around the country throughout the week), Michael Ratner, Heidi Boghosian and Michael S. Smith explore condictions in Gaza and humanitarian relief efforts with Felice Gellman and attorney Richard Levy and they discuss the Arab Revolution (minus Iraq) with Jim Petras.

Recently, I was listening to KGO radio and in case you don’t know, KGO is the ABC affiliate super-station here in San Francisco that can be heard by millions of people with it’s mega-wattage transmitter.
Gene Burns happened to be the host at that time. The night that I was listening, Mr. Burns was wondering why the U.S. is bombing Libya, but not Syria, because Syria is, “torturing and killing children,” and Mr. Burns didn’t know how the people of the world could stand by and watch this happen.
I wish I could have gotten through on the call-in line because I would have asked Mr. Burns how he feels about the USA torturing and killing children in places like Libya, Iraq, Afghanistan, Pakistan and Yemen. These are the active places the US is bombing, but what about the children that were held or are being held in places like Guantanamo Bay, Cuba; Abu Ghraib in Iraq or Bagram AFB in Afghanistan? Why are the "people of the world" standing by and watching the US destroy civilization as it murders and tortures children?