Kat's Korner: It's not easy being assembly lined

Kat: Kermit the Frog was the successor to Barbra Streisand. I say that knowing many will have difficult grasping that point. In many ways, that's a good thing because it demonstrates how much times have changed. For some of you, this piece will make you remember. For those too young to remember, maybe you'll still get the point. 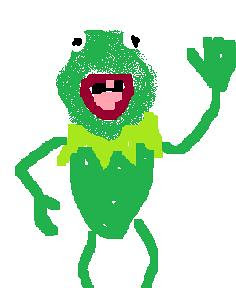 One rare exception is Weezer and Hayley Williams' "Rainbow Connection" which captures the magic of that tune, the only top 40 hit the Muppets ever had, written by Kenneth Ascher and Paul Williams for 1979's The Muppet Movie. It seems just as magical and you can't say, "Well it's because it's a great song." It is a great song but, as one listen to the album demonstrates, it's really easy to ruin a great song.


Take OK Go's version of the theme to The Muppet Show which does have the same lyrics (sang poorly) but moves like a tugboat as opposed to the up-tempo number ("it's time to get things started") the theme is remembered as. Some failures are noble. Amy Lee attempts to work that spooky magic Evanescene has made her famous for and while her "Halfway Down the Stairs" has little to do with the Muppets, it is listenable and even artistic. Airborne Toxic Event seems to think an adenoinal main vocal and an ocean of background vocals will make "Wishing Song" be about something failing to grasp that, with children's entertainment, simplicity often counts a great deal more. When Brandon Saller shows up as a low-rent, herpes plagued David Lee Roth knock-off trying to do a Vegas-ish heavy metal take on "Night Life," you realize not only how horrible the album is but how it's really not for children, it's for the hipster parent too into their own musical tastes to put on a children's album for the kids.

The ultimate disaster is what Andrew Bird does to "It's Not Easy Being Green." Please note, his whistling is piercingly off key and irritating but the whistling is actually an improvement to his singing. He seems to think he's going to 'sell' the song and, in attempting to do so, he destroys it. Now Rufus Wainwright, among others, could grab this song and sell it as drama. But that's because there's depth to Rufus. Andrew Bird's always been nothing but surface.

He shows no indication of grasping the point of "Being Green" (as the song is also known).

Similarly, Kermit singing "It's Not Easy Being Green" on Sesame Street back in 1970 had a power to speak to those same groups that had been disenfranchised and counted out, put down and/or forgotten. The power of the song is why Diana Ross included it in her live performances, offering one of the most tender and vulnerable versions I've ever heard, and it's why Ray Charles and Frank Sinatra performed it. It's why what was intended to be a minor moment, a song Jim Henson wrote just being himself, became a standard.

Now when Andrew Bird delivers his awful version of "Being Green," maybe it's saying something about how far we've come as a nation and how much the Barbras and Kermits have helped us see the beauty all around us and within us? I'd love to believe that. But the reality is that Bird is like so many other hipsters who never got reality in real time. And what he does to the song is destroy it, we're talking destruction on the level of Wayne Newton trying to sing Judy Garland's "Over The Rainbow."

I'm sure the album will sell. It's been produced and marketed to sell. It's heartless and plastic and everything the Muppets weren't. But Jim Henson is no longer with us and his family no longer owns those amazing friends so many of us embraced. Where the Muppets were unique for what they did and their personalities, what's served up today is the trite Elmo -- famous for being cute and cuddly. Cute and cuddly produces no Oscar The Grouch, produces no Miss Piggy. Cute and cuddly gave you Teresa Brewer, it did not give you Barbra or Sly or anyone authentic. But authenticity's never really been important to Walt Disney Corporation (current owners of the Muppets), pre-packaged, assembly line production has been. So expect more of the same and expect it to be as heartless and soulless as Muppets: The Green Album.

[Betty's daughter did the illustration of Kermit. I thank her for it.]