Kat: Last week's review of Joss Stone's great album and my comments about how artistically the Brits are winning the year musically resulted in many, many e-mails. I agreed to listen to a number of albums and, as last week progressed, even said I'd review whatever ended up being the most cited. That's bad news for fans of the Beastie Boys.

The 'group' dropped their latest crap piece May 3rd and it's entitled Hot Sauce Committee Part Two. For those late to the party, the Beastie Boys are three White Jewish men who rap. When they started out, they were a good novelty act with prank calls resulting in 'songs' like "Cooky Puss" where they call around asking for "Cooky Puss." They were the Jerky Boys six years before the Jerky Boys, minor players in the world of comedy.

Three years after "Cooky Puss" came License To Ill which was marketed as a rap album but actually sold as a comedy album. The reasons for that were not limited to the nods to Jerry Lewis. Michael Diamond ("Mike D") was already 20 and about to turn 21 when License To Ill was riding the charts, Adam Yauch ("MCA") was 21 about to turn 22 and Adam Horovitz (Ad-Rock) was 19 about to turn 20. So lines like "your mom threw away your best porno mag" were really several years behind them. Unless you bought the premise, as one music magazine at the time did, that the Beastie Boys were the ultimate pot act and, in fact, like the anti-pot PSA airing around that time which declared if you smoked pot nothing would ever happen to you and the main pot smoker (who failed to look for a job that day) asks his buddies to "crack the window" because his mom's in the house.

"Fight For Your Right To Party" and "She's Crafty" were little more than humor routines put to a beat. And maybe that wouldn't have aged well. But I'd argue the Beastie Boys didn't age well. On the latest album, they beg listners to disown them as they boast, "We're going to party on the left, party on the right, party for the mother f**king right to fight." And, no, not "right to fight to party." The middle class boys (and upper-middle class in one case) have grown many years older and now see themselves as dangerous street punks. While that will make your sides split with laughter, they're actually not trying to make you laugh these days.

In "Make Some Noise" they boast that they're now like Dino (Dean Martin) and, as gifted as he was, his partner Jerry Lewis was the comedy master. It's as though a singing group decided to identify with Richard, and not Karen, Carpenter.

"Long Burn The Fire" is just one of many tracks on which they boast of how they're ready to rumble and warn about what bad-asses they are while you get the feeling that the last time they 'threw down' was when Mommy and Daddy failed to get Barry Manilow to perform at their Bar Mitzvahs. And you also wonder if they grasp how ridiculous -- and, yes, old -- they sound?


How old are they?

Let me put it in music years everyone can understand.

Which brings us to the other thing that made the Beasties: Sex. 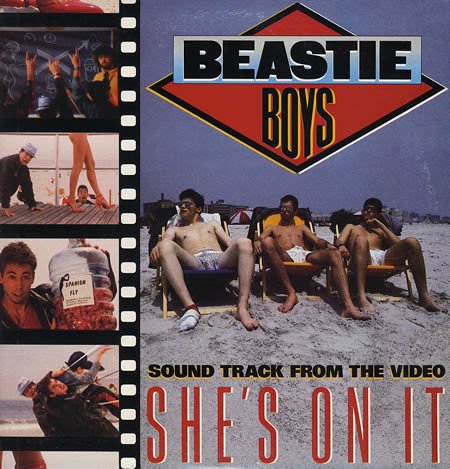 They were three nobodies. Funny boys at best. Then came their track for the film Krush Groove -- more importantly their video. All the images above are from their video. The hot one in the hat, on hands and knees, behind two women's legs is Ad-Rock. He's also the only sexy one on the beach in his underwear (he's wearing one sock). Mike D was not sexy. At his best, he looked like Angry Dad (too intense and too old for the youth market). MCA looked good from certain angles but from others it was as though his face was melting. Then there was the baby with the baby fat, Ad-Rock. That soft, douby body spoke of naughty delight. It was that promise that got the Beastie Boys on MTV to begin with.

Sex made Ad-Rock the break-out star. He's the one Madonna singled out on the tour. And though Molly Ringwald's brief star had already begun fading, she was still a bit of a teen queen when she hooked up romantically with Ad-Rock. He'd be linked to many more big names and even marry two: first Ione Skye and now Kathleen Hanna.

When Hollywood came calling as License To Ill became the multi-platinum hit, Hollywood came calling only for Ad-Rock. Of all the offers, he chose to do a film about troubled youth, Lost Angels, with Donald Sutherland borrowing heavily from Judd Hirsch's role in Ordinary People. For that foray, Ad-Rock insisted he be billed as Adam Horovitz. The press was full of talk that the band would break up and how Adam Horovitz had Molly Ringwald for a girlfriend and a big movie coming out and what did he need the group for?

Now's a good time to shift over to the Beastie Boys' music. What can you say about the music? That they use a fuzz box? That most of it sounds about as 'complex' as what a child might create by turning the crank on a Jack-N-The-Box?

Yep, that pretty much covers it. But in the wake of License To Ill, when people wanted the funny boys to make them laugh, the Beasties decided they were artistes and issued the dead-on-arrival Paul's Boutique which fooled a number of critics who insist it was a classic. It was not a classic. The Beasties were proving that rap could rock and not with their AC/DC rip-offs but with a real attitude and swagger -- one that Ad-Rock actually looked f**kable trying to pull off. But now they wanted to depress the world. It was worse than when Billy Idol tried to mature on his follow up to Rebel Yell.

And that really was it for them. "Sabotage" rocked musically and helping the sales of Ill Communication but even then, this 'big' hit only made it to 115 on Billboard's Top 200 singles. Not great for the group that had stormed to number seven with "(You Gotta) Fight For Your Right (To Party)." Since License To Ill, they've only hit the top 30 once, with "Intergalatic" from Hello Nasty (number 28 on Billboards Top 100 singles).

Hello Nasty? Since we're talking about music and how the Beasties bad music has fooled many critics, let me point out that Rolling Stone's critics picked Hello Nasty as the album of its year. That was 1998. If you know music, that's got you laughing already. Hello Nasty sold 3 million copies in the US. Not bad but not enough to be considered the biggest hit. It won two minor Grammys: Best Rap Performance by a Duo or Group and Best Alternative Music Album.

The Miseducation of Lauryn Hill. Over 8 million copies sold in the US alone. Ten Grammy nominations, five wins -- including the ultimate prize: Album of the Year.

And that's really what's helped to further destroy the group. Since they long ago neutered themselves with each follow up to License To Ill, their only real hope was as a nostalgia act. But as White critics have repeatedly rushed to assure that these three White men have the best album every year they release one, the public's turned on the critics' pet. When a monument like Hill's debut album is ignored for the insipid Hello Nasty, you're begging for a palace coup.

Maybe they realize it? Maybe that's why, on "Nonstop Disco Powerback," Ad-Rock's rapping that he's "like macaroni because this s**t sounds cheesy"? And what about Santigold's guest spot on "Don't Play No Games That I Can't Win"? Saying "that s**t gets old"?

Could the Beastie Boys get how ridiculous, as they close in on fifty, they're coming off?

They may not grasp it but the music buyers do and that's why Hot Sauce Committee Part Two has not been certified even platinum -- despite the fawning reviews -- and why it's quickly become the worst selling studio album of their career.