Sunday a US soldier died in Iraq and, on Monday, he was identified as Estevan Altamirano. Remember last week?

Last Thursday, ICCC's number of US troops killed in Iraq since the start of the illegal war was 4479. Tonight it is [PDF format warning] 4480. 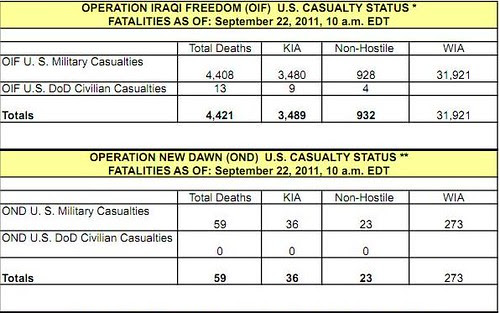 That's the current screen snap. Reminder, Operation New Dawn is the name Barack gave to the Iraq War that went into use starting September 1, 2010. We'll come back to that. 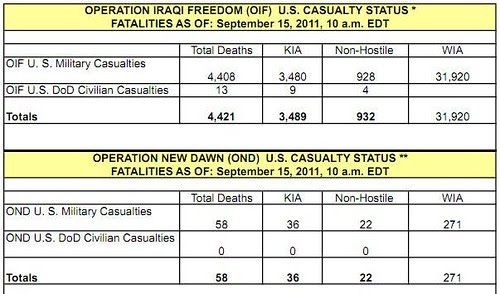 There was one death on Sunday and the count increased by one.


If you were around last week, you'll remember we noted that there were 2 deaths in the count that had showed up in the last seven days without DoD announcing any deaths.

Well you'll note they increased the death by one for last Sunday's fallen but they didn't take out those 2 deaths. So there have been three US service members killed in the Iraq War this month. Since everyone tries to pretend it didn't happen, don't be surprised when they 'report' shortly something like 'only one death this month!!!!!'

We need to drop back to the August 31st snapshot:

Tim Arango is back in the US for a rest (like so many foreign reporters covering Iraq, he's been out for the month of August) which means Michael S. Schmidt gets to face my wrath today instead. And he can take comfort in the fact that (a) he's just written the perfect piece for the Times and (b) my hatred of it won't do a thing to change the way its embraced by the Grey Lady. "Iraq War Marks First Month With No U.S. Military Deaths" gushes the headline -- and sadly, the headline writer properly summarized Schmidt's article. Really? That's a milestone?
Hmm. Not seeing it. In fact, there's sort of a stink wafting from the article, a We're-so-much-damn-better-than-everyone-else-in-the-world. In other words, a "milestone" in Iraq would be a month when no Iraqis were killed. That would be a "milestone." This? Not so much.
Leave aside the wounded this month -- the New York Times certainly did, never reporting on any of them -- and the attacks on US forces -- ibid -- and the fact that the administration wanted US troops confined on bases for all but "essential missions" this month (after the heavy death toll in July). Set all of that aside. And grasp that since the Iraq War "ended" (Barack's August 31st declaration of the end of combat operations), the Pentagon says [PDF format warning] 56 US military personnel have died. In one year. In one year since the illegal war supposedly ended. The 56 who died in the last 12 months are still dead. If they'd all died in June or all died in January or at a rate of a little over 4 each of the 12 months, they'd still be dead.
August 31st, the count was 56. Today the count is 59. That's three deaths. Only one (Sunday's) was ever acknowledged by DoD. Now maybe the other two were only tabulated in September? Maybe they took place in August and, for a wave of Operation Happy Talk, the Pentagon hid them until after the "NO DEATHS IN AUGUST!!!" stories had all been found?

I don't know but the Pentagon's had over a week to explain themselves. And the silence on this topic goes to how little the media cares about the ongoing Iraq War.


iraq
i hate the war
the ballet
Posted by Common Ills at 8:57 PM